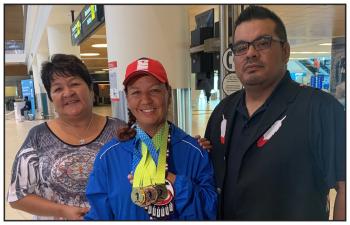 “It was hard, challenging, very challenging because they were very fast and strong paddlers, like Iran, Czech Republic, and Ukraine. That was my favourite race that we did.” — Pimicikamak Cree Nation member Trina Ross.
By Shari Narine
Local Journalism Initiative Reporter
Windspeaker.com

Ross had no idea that getting two of her sons involved in the Winnipeg paddling club would lead to her being chosen for an international Team Canada dragon boat competition.

She had no idea she would return home from the Czech Republic with eight medals, including three gold.

And she had no idea that when she disembarked from the airplane at Richardson International Airport in Winnipeg on Sept. 6, she would be greeted by a contingent that included leaders from her First Nation and that she would be wrapped in a star blanket.

“I got emotional. I did not expect that at all, to get any gifts. It was an honour to receive the blanket especially from council and Elder Rebecca Ross,” said Trina Ross (no relation). “I was overwhelmed.”

On top of all of that, her four boys are “very proud” of her and her 12-year-old kayaking son Breas Ross “says he wants to be like me, wants to join dragon boat when he’s older.”

Trina Ross competed in the 2022 ICF Dragon Boat World Championships in Račice, Czech Republic, from Sept. 1 to Sept. 4. She was a member of both the senior women’s team and the mixed team, paddling in both 10-member and 20-member dragon boats.

Ross says she preferred competing in the senior women’s category.

“It was hard, challenging, very challenging because they were very fast and strong paddlers, like Iran, Czech Republic, and Ukraine. That was my favourite race that we did. That was our very last race. We didn’t place in that one, but that was the hardest I’d ever paddled,” she said, as a member of the 10-woman dragon boat.

The senior women are those 20 years and older. Ross is 44.

She was selected as one of 30 members to Team Canada by Jerome Seremak, the technical director and provincial coach of the Manitoba Paddling Association. Seremak also coached Team Canada.

It was Seremak who introduced Ross to dragon boats a few years ago when she dropped her sons off at the Manitoba Paddling Association, which canoes, kayaks and dragon boats on the Red River in Winnipeg. Along with Breas, who kayaks, Ross’s eldest son Braeden Thomas, 17, canoes. Up to that point, Trina had been paddling canoes for nine years and was also a rower.

Ross says she paddled all summer. When she dropped her boys off to practise at the club, she would go out in her canoe. Three evenings a week she attended dragon boat practises. When she wasn’t on the water, she lifted weights, ran or did other cardio.

It was never her attention to be selected to Team Canada nor to compete internationally.

“I was doing it because I was enjoying it. I like being out on the water,” said Ross.

Team Canada didn’t practise until they were in Račice. They arrived in the Czech Republic on Aug. 29 and practised the next two days. Ross says there was no difficulty in finding their rhythm as paddlers.

“It worked out okay. We all have to follow the pacer that’s sitting in the front. Everyone’s focused on whoever is sitting in front of you so the rhythm is good. I think we all did good,” said Ross.

Then it was four full days of competition, race after race.

“I was very nervous at the races. When we first left here, it didn’t sink in until we got there and got to the (starting) line, the first race when there was us and China lining up and other countries. I was very nervous,” said Ross. “I was trying to concentrate, looking towards the finish line. I didn’t really want to look around. I was nervous. My hands were shaky. I had to try and calm myself down.”

As for her teammates, Ross said, “they were all calm… They were just ready. I don’t know if I was the only one who was nervous or not.”

Some members had served on Team Canada before. While Ross wasn’t the only newbie, she was the only Indigenous woman. The Pimicikamak Cree Nation flag was hoisted in the Czech Republic along with the Canadian flag.

“It makes me feel happy knowing that I’m a role model in that sport. At the same time, I’m trying as a mother. You want to do what’s best for your children. You want them to succeed in what they do. You don’t want them to get into alcohol or drugs or anything like that, so I try to keep them in sports. I do what I can as a mother in keeping them away from trouble,” she said.

“For parents who have children into sports, support them. It’s very important for athletes to have their parental support,” she said.