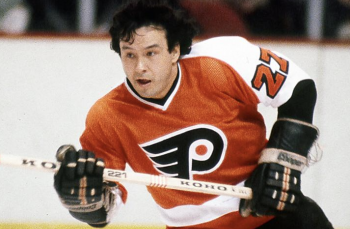 Reggie Leach is featured in a new book from the Manitoba Aboriginal Sports and Recreation Council.

“Although these moments may not be recognized until after their effects have been felt, their impact is everlasting, inspiring new generations of coaches, athletes and builders to continue sharing their voices and cultures with the world.” —Carriera Lamoureux
By Sam Laskaris
Local Journalism Initiative Reporter
Windspeaker.com

The Manitoba Aboriginal Sports and Recreation Council has produced a book titled A History of Excellence – The Untold Stories Of Manitoba’s Indigenous Sport.

Janice Forsyth, a member of Fisher River Cree Nation in Manitoba and leading Indigenous sports historian, wrote the introduction for the 312-page book.

Forsyth said MASRC officials realized detailing Indigenous sporting history was a practical use of their time when pandemic restrictions shut down public gatherings, including sporting events.

“One of those pieces was their desire to let the world know that Indigenous people in Manitoba have always excelled in sport, despite the many obstacles they faced,” Forsyth wrote in her introduction. “Sharing these stories is important.

“It shows us where Indigenous sporting experiences overlap and where they diverge, revealing the many different pathways participants have taken to become involved in sport, and the different ways they have woven sport into their lives. Equally, if not more importantly, this book also makes their stories visible to a wider audience.”

The opening section of the book features athletes from the era dating 1895 to 1912.

Keeper developed his love for running while attending a residential school in Brandon, Man. But he was not always encouraged to do so as his principal would occasionally stop him only to tell him he was not strong enough to run.

Keeper never paid attention, however, to that advice. In fact, he went on to represent Canada at the 1912 Stockholm Olympics.

“Keeper’s running career came to an end with the onset of World War 1,” Lamoureux said. “In 1916, before the start of the Summer Olympic Games, Keeper voluntarily enlisted in the Canadian military.”

Almost a century later, Keeper was posthumously inducted into Canada’s Sports Hall of Fame. He is one of 14 Indigenous inductees in the hall.

Keeper is one of five athletes featured in the opening section of the book. This initial segment also includes information on the Winnipeg Victorias, a dominant men’s hockey team in the late 19th century that featured Indigenous players.

The following three sections in the book featuring athletes contains a considerably larger number of individuals than in the first.

Reggie Leach, who helped the Philadelphia Flyers capture the Stanley Cup in 1975, is among those profiled by Taylor.

Besides detailed information on his pro career, the chapter on Leach also includes details on his current life.

Leach, a member of Berens River First Nation in Manitoba, is currently living at Aundeck Omni Kaning First Nation on Manitoulin Island in Ontario. He frequently visits his home province to assist his son Jamie, also a former NHLer, with his Shoot To Score hockey school.

“My life is balanced right now,” Leach said. “I still get involved in teaching and coaching Aboriginal kids. I’m still getting my message out. I’m moving forward. I did a lot of stupid things in my life, but I also did a lot of great things. In the end, life will even out. Life is very good right now.”

A more recent women’s hockey player profiled in the book is Jocelyne Larocque, a Métis from the Manitoba town of Ste. Anne.

Larocque made history in 2014 becoming the first Indigenous player to suit up for the Canadian women’s Olympic team. She helped the Canadians win the gold-medal game over the United States 3-2 in overtime at those Winter Olympics staged in Sochi, Russia.

“To be told I was going to the Olympics, well, it was just the greatest news anyone ever gave me,” Larocque said.

The book also includes chapters on coaches and builders, teams and the Tom Longboat Awards.

“All these small, yet powerful, actions, whether they receive national recognition or not, created a ripple effect that served as a reminder that the Indigenous spirit will never die,” Lamoureux said. “Although these moments may not be recognized until after their effects have been felt, their impact is everlasting, inspiring new generations of coaches, athletes and builders to continue sharing their voices and cultures with the world.”