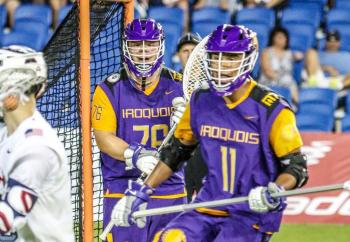 “What they’ve done is put the values of our game—the Creator’s Game—into action. Peace (and) friendship, that was the foundation of the game.” —Oren Lyons said of Ireland Lacrosse.
By Sam Laskaris
Local Journalism Initiative Reporter
Windspeaker.com

An Ireland Lacrosse gesture that made headlines throughout the sporting world has been recognized with a Musial Award. The award was bestowed in a ceremony that was part of a 60-minute television broadcast on CBS on Dec. 26.

The Musial Awards recognize some of the greatest moments of sportsmanship from the past year. The award, which has been given annually since 1999, was named after legendary baseball player Stan Musial 2012.

Musial, considered one of the most consistent hitters in baseball history, played 22 seasons in the major leagues, all with the St. Louis Cardinals before retiring in 1963. Musial is also said to have embodied the virtues of sportsmanship — class, excellence, humility and generosity.

This past July it was learned that the Iroquois Nationals, who represent the Haudenosaunee Confederacy at international lacrosse events, had not been invited to compete at the 2022 World Games scheduled for Birmingham, Alabama.

Even though the Iroquois Nationals are one of the world’s top lacrosse teams, the Haudenosaunee Confederacy is not currently recognized as a nation by the International Olympic Committee (IOC).

And officials from the World Games maintained they were simply following the IOC criteria when determining which eight nations to invite to compete in the men’s field lacrosse tournament at its 2022 Games.

But the decision quickly saw a backlash and it spread to many lacrosse supporters around the world, especially because it is Indigenous people who are credited with inventing the sport.

Shortly afterwards, officials with Ireland Lacrosse announced they would voluntarily withdraw their spot at the World Games to pave the way for the Iroquois Nationals to be included in the multi-sport event.

Leo Nolan, the executive director of the Iroquois Nationals lacrosse program, was obviously pleased to see officials from Ireland Lacrosse step up and offer their tournament spot.

“We’re thankful they did it for us and for the lacrosse community in general,” Nolan said.

The fact the Iroquois Nationals were not one of the teams originally invited to participate in the World Games and the subsequent withdrawal from Ireland Lacrosse created headlines throughout the world.

“It was great recognition for Ireland Lacrosse and the lacrosse community in general,” Nolan added. “There’s human kindness, a lot better than we realize sometimes.”

Nolan said he has known for a few months that Ireland Lacrosse would be recognized with a Musial Award.

But prior to that, he admits he didn’t know much about the awards.

“Their officials contacted me early in the fall about the possibility of this happening,” he said. “We recognized then how great of an event this is.”

Nolan said officials from the Musial Awards were looking for confirmation that the Iroquois Nationals were indeed included in the 2022 World Games after Ireland Lacrosse withdrew its accepted invite.

Plus, award organizers were also seeking more background on the story.

Nolan was pleased that officials came to the Onondaga Nation in New York to interview both Oren Lyons and Rex Lyons for the segment on the award presented to Ireland Lacrosse.

Oren Lyons is the honorary chairman of Iroquois Nationals Lacrosse. Rex Lyons is one of the program’s current board members.

“What they’ve done is put the values of our game—the Creator’s Game—into action,” Oren Lyons said of Ireland Lacrosse. “Peace (and) friendship, that was the foundation of the game.”

Oren Lyons added he would like to see the Iroquois Nationals make the most of their opportunity now that they will compete in next year’s Games.

“For them to give up a spot in a World Games, which everybody struggles for, it is a good ray of light,” he said. “And we should make the most of it.”

As for Rex Lyons, he’s not thrilled those from the Haudenosaunee Confederacy were once again forced to stand up for their identity.

Michael Kennedy, the CEO of Ireland Lacrosse, said it was unusual that the Iroquois Nationals were not one of those originally invited to take part in next year’s World Games.

“Our players, our fans, our administrators and our supporters were wanting to know what could Ireland do to enable the Iroquois Nationals to compete,” he said. “They recognized this as an opportunity to give back.”

And that’s why Ireland Lacrosse willingly gave up its spot and allowed Games’ organizers to invite the Iroquois Nationals to take its spot.

“I think this issue hit a chord with a lot of people,” Kennedy said. “It also evoked the potential that sport and sportsmanship can have in promoting ideals of social justice.”