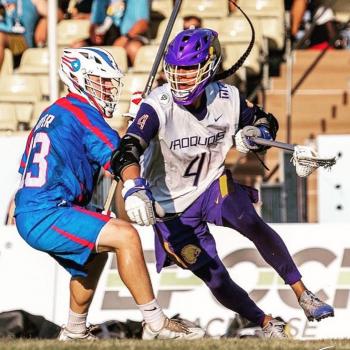 Iroquois Nationals will now compete in the 2022 World Games after first being denied entry.

“We are a proud member of World Lacrosse… we know the right thing is for the Iroquois Nationals to represent our sport on this international stage.” — Michael Kennedy, chief executive officer, Ireland Lacrosse
By Sam Laskaris
Local Journalism Initiative Reporter
Windspeaker.com

Leo Nolan no longer has to worry whether the Iroquois Nationals will be allowed to participate in the 2022 World Games.

Nolan, the executive director of the Iroquois Nationals men’s field lacrosse squad, can now start to focus on building a team that will fare well, and possibly even win the international tournament, which will be staged in Birmingham, Alabama.

A worldwide furor in the lacrosse community was caused in July when it was revealed that the Iroquois Nationals, who represent the Haudenosaunee Confederacy in international events, were not one of the eight clubs invited to compete at the Birmingham games. The Iroquois Nationals are traditionally one of the top finishers at world tournaments.

World Lacrosse, the sport’s governing body, has allowed the Iroquois Nationals to compete at its global events.

The IOC does not currently recognize the Haudenosaunee Confederacy as a nation.

Representatives from lacrosse associations around the world voiced their support to include the Iroquois Nationals at the Birmingham tournament.

And a positive outcome was achieved on the weekend when it was announced the Iroquois Nationals had been offered and accepted a spot to compete at the 2022 World Games.

“We’re very pleased they came to this decision,” said Nolan.

Nolan said it’s not simply his team that is supportive of the decision to include the Iroquois Nationals into the 2022 tourney.

He was confident organizers would have a change of heart, especially considering the tremendous worldwide support the Iroquois Nationals had received. This included talk that some other elite players from other powerhouse squads, Canada and the United States, would consider boycotting the event if the Iroquois Nationals were not allowed to take part.

The road to include the Iroquois Nationals was paved last week when Ireland, one of the eight clubs originally invited to compete in Birmingham, withdrew from the event.

“It's simply the right thing to do,” said Ireland Lacrosse’s chief executive officer Michael Kennedy. “We are a proud member of World Lacrosse and we recognize the importance of the World Games to the continued growth of our sport. As much as our players would have been honoured to compete, we know the right thing is for the Iroquois Nationals to represent our sport on this international stage.”

Sue Redfern, the president of World Lacrosse, was pleased to see the Iroquois Nationals will be included in the Alabama tournament.

“This is a very good day, and outcome, for the sport of lacrosse,” she said. “We have arrived at an outcome that will create a true showcase for lacrosse at the World Games 2022 in Birmingham. This was achieved by our organizations coming together, listening carefully and working constructively to reach a shared goal.”

This wasn’t the first time Ireland and Indigenous peoples have bonded over an issue.

Back in 1847 members of the Choctaw Nation took up a collection to support those suffering from famine in Ireland. A total of $170 (a sizeable sum in those days) was raised to support Irish famine victims, a gesture that has not been forgotten.

The Choctaw Nation and Ireland have celebrated the 1847 famine collection various times over the years. In 1992 the Choctaw Nation made Ireland’s then president Mary Robinson an honorary chief.

Nolan said he has communicated with Kennedy to thank the Irish squad for withdrawing from the 2022 World Games, enabling the Iroquois Nationals to take part.

Nolan said the Iroquois Nationals will also show their appreciation next year when its under-20 squad competes at its world tournament in Limerick, Ireland.

Nolan said that once they arrive in Ireland team members will be wearing shirts with the Iroquois Nationals’ logo but with green and orange colouring (two of the colours in Ireland’s flag) instead of the usual purple and yellow composition.

“I think it’s really important for our younger guys to hear and see how Ireland operates,” Nolan said.

The 2022 World Games will signify the first time lacrosse has been featured at the multi-sport competition.

The Games, first held in 1991, are staged every four years. The Birmingham Games were originally scheduled for 2021 but were pushed back one year due to the COVID-19 pandemic.

The Iroquois Nationals placed third at the last two men’s world field lacrosse championships in 2014 and 2018. Canada took the gold at the 2014 event downing the United States in the gold-medal match. The Americans avenged that loss four years later, beating Canada in the championship final.

“I think our team is going to win the gold in 2022,” Nolan said. “That’s always been our goal, to be the best team in the world. I think we’re close to it. We’ve progressed a lot the last few years.”