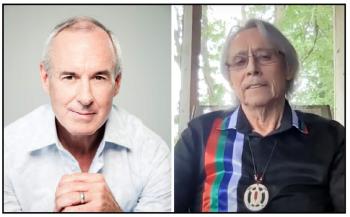 “It was really exciting to see “Respect The Gift” featured on Hockey Night in Canada. Music and hockey are two of my favourite things, and to see them come together like that was pretty amazing.” — musician Adrian Sutherland
By Odette Auger
Local Journalism Initiative Reporter
Windspeaker.com

Courchene is known for his work with The Turtle Lodge, which he founded in 2002. His Anishinaabemowin name Nii Gaani Aki Inini means Leading Earth Man.

Sunday morning, Hockey Night in Canada host Ron MacLean emailed Nii Gaani Aki Inini, asking if he would like to share his voice on Indigenous Peoples Day. It would open the game between the Tampa Bay Lightning and the New York Islanders.

“It was a surprise, but a good one,” Courchene laughed.

“Hockey Night in Canada has really stepped up to the plate in acknowledging Aboriginal people,” said Nii Gaani Aki Inini. “I think they’ve done a wonderful job promoting that.”

The invitation was intended to recognize and acknowledge Indigenous people on the annual national day of awareness celebrating Indigenous achievement and contribution.

Ron MacLean had been following Elder Courchene’s teachings, and felt strongly there should be an Indigenous-led opening on Indigenous Peoples Day.

“I asked Dave, and let him know it was only around 90 seconds. Television doesn’t stop for anything,” he laughed.

MacLean asked if Nii Gaani Aki Inini would be willing to share a welcome or opening on June 21 to represent the voices of Métis, Inuit and First Nations peoples.

“I was just blown away when he chose to do the Seven Grandfathers [teachings],” said MacLean. “And that's what he chose to do. And I just love his last line. In hockey the most valuable player receives the Hart trophy. And I don't think he was doing a pun, but you know, for me, we always say they play with heart.”

“It was just beautifully executed and a real nice tribute too, through a man who has given his life to teaching,” said MacLean.

Elder Courchene spoke about how we can incorporate the seven teachings into our daily life, and although it’s not easy, it can bring a real shift for the better.

“Today I bring a vision of hope for my people,” said Courchene in the opening.

“We can change the narrative in this country, and bring a dream to reality in our homeland that can unite us in our diversity,” he said. “Our Seven Sacred Laws can act as the foundation of unity,” said Nii Gaani Aki Inini.

“We were given the law of respect, the essence of which is to give. The law of love – loving Mother Earth and ourselves,” he said.

“Having courage is always doing what is right. Being honest is being truthful in words and speaking in a kind way about others.”

“Wisdom is knowing that each of us has a unique gift to build a peaceful world. Humility is knowing we are all equal in the eyes of the Great Spirit. And showing gratitude for the life we have.”

The Sportsnet broadcast also included the song  “Respect the Gift” by Adrian Sutherland, an Attawapiskat musician.

Hockey Night in Canada has used clips of his songs several times before in TV bumpers during hockey games.

“One of the songs they like best is “Respect The Gift,” Sutherland said. He said they had a good response to it, and had told Sutherland they would consider it for an opening montage sometime.

Sutherland found out Monday they would be using it for the game on National Indigenous Peoples Day.

“They wanted to feature a song by an Indigenous artist. I’m glad they chose my song,” Sutherland said.

“It was really exciting to see “Respect The Gift” featured on Hockey Night in Canada. Music and hockey are two of my favourite things, and to see them come together like that was pretty amazing.”

Sutherland believes Indigenous people benefit when they hear a song by an Indigenous artist play on a mainstream program.

“It can also bring hope to other Indigenous artists, especially young artists, by showing them there are opportunities out there,” said Sutherland.

The song is “about using our gifts for good, and not taking for granted the everyday freedoms and luxuries we have,” said Sutherland. “There’s never been a more important time to appreciate all that we find precious, especially given the world we’re living in today.”

The song’s message ties into the teaching of gratitude Elder Courchene shared.

In the Elder’s words there was a clear message to embrace diversity and invite all people to recognize their ability to walk in a good way.

It’s not about converting people, said Nii Gaani Aki Inini. It’s about asking people of all kinds to consider the spiritual side of their nature.

Elder Courchene is pleased to know that a wide audience was able to hear the seven sacred laws, and was especially glad to have outreach to young people.

It was an opportunity to speak to a very wide audience, he said of the broadcast. “To show how beautiful we are as Indigenous people.”

MacLean says his team at Hockey Night in Canada are all on board, working collectively on how they can play a role in shifting the perspectives of society to become more inclusive. He’s grateful to be living at a time when these conversations are finally happening.

“Being truthful is living these laws collectively as people of the heart; living in kindness. We all have that capacity to live these laws,” said Nii Gaani Aki Inini.

“Are you a person of the heart?” the Elder asked his national audience.