Indigenous players have hoisted Stanley Cup in the past; unclear when others will join them with NHL season on pause 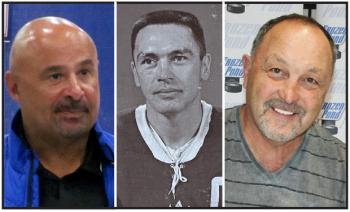 It remains to be seen whether the Stanley Cup will be awarded in 2020.

Like all other professional sports leagues in North America, the National Hockey League (NHL) suspended operations this past week due to COVID-19 concerns.

There has been no official word whether the league will resume its 2019-20 regular season action, which was originally set to run until April 4, or if any sort of playoff schedule will be staged.

This past weekend the American-based Centers for Disease Control and Prevention recommended cancelling all events with 50 or more people for the next two months. Following that guideline, it would be mid-May before the NHL could conceivably start up again.

League officials are keen to resume their season at some point and eventually anoint a Stanley Cup champ. Whether that actually happens is still up in the air.

Whether Indigenous players will be among those who hoist hockey’s most prestigious trophy over their heads this year, it seems will not be known for some time.

What is a fact, however, is that several Indigenous players have already had their names engraved on the Stanley Cup.

Leading this list is Bryan Trottier, who was born in the Saskatchewan village of Val Marie. Trottier, who has Metis, Cree and Chippewa ancestry, was fortunate to win the Stanley Cup seven times, six of those as a player.

Trottier won his first Cup in 1980 as a member of the New York Islanders. He also was awarded the Conn Smythe Trophy that spring, as the NHL’s most valuable playoff performer after registering 29 points (12 goals and 17 assists) in 21 post-season contests.

As it turned out, Trottier’s playoff successes were only just beginning. That’s because he was also playing for the Islanders when they captured the Stanley Cup in ’81, ’82 and ’83.

After his four championships in four years, Trottier had to wait eight seasons before winning again. He ended up with back-to-back titles with the Pittsburgh Penguins in 1991 and ’92.

Trottier’s seventh championship came in 2001, when he served as an assistant coach with the Colorado Avalanche.

The Indigenous player with the second most Stanley Cup titles is Grant Fuhr, whose mother was from the Enoch Cree Nation in Alberta.

Another Indigenous star who won several championships was George Armstrong, who played 21 NHL seasons all with the Toronto Maple Leafs.

Armstrong, whose mother was Ojibwe, was nicknamed Chief. He had instrumental roles with the Maple Leafs during some of their glory years in the 1960s.

Jordan Nolan, Ojibwe from Garden River First Nation in northern Ontario, has been a member of three Stanley Cup winners, most recently last year with the St. Louis Blues.

Nolan earned his first two championships with the Los Angeles Kings in 2012 and ’14.

Nolan was part of the Blues’ organization last season but spent the majority of the year with its American Hockey League affiliate San Antonio Rampage. He did suit up for 14 regular season contests with the Blues and was practicing with the St. Louis squad for the majority of its playoff run in case he was called upon to dress for action.

Even though he didn’t play enough games to have his name engraved on the trophy again, Nolan did get to go onto the ice after the Blues won the Cup and is still considered a three-time winner of the trophy.

The Blues’ head coach, Craig Berube, a Cree from Calahoo, Alta., also finally managed to get his name on the Cup last year. Berube had played 18 seasons in the pro ranks but was never fortunate enough to be on a championship squad.

One of Nolan’s former teammates in Los Angeles is a two-time champion.

Another two-time Cup champion, Jamie Leach, is also part of a trivia question.

Leach was a member of the Pittsburgh Penguins, who won back-to-back titles in 1991 and ‘92.

Leach followed in the footsteps of his father Reggie, an Ojibwe from Berens River First Nation in Manitoba, who won the Cup with the Philadelphia Flyers in 1975.

Reggie and Jamie Leach are the only father-son Indigenous duo who have their names engraved on the Stanley Cup.

Other Indigenous players who won the Cup include Theo Fleury, Chris Simon and T.J. Oshie.

Fleury, who is Metis, won his title with the Calgary Flames in 1989. Simon, an Ojibwe from Wawa, Ont., helped the Colorado Avalanche win in 1996. And Oshie, an Ojibwe from Mount Vernon in the state of Washington, captured the Cup in 2018 with the Washington Capitals.