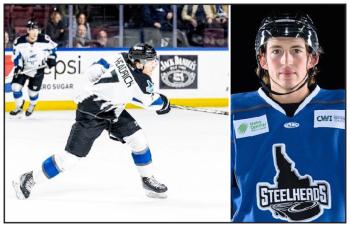 Owen Headrick, a member of Garden River First Nation in northern Ontario, is playing his first full pro season with the Idaho Steelheads in the ECHL.

“It’s great. I get to play and hang out with the team all the time. And in my spare time I’ve been doing a lot of fishing.” — Owen Headrick
By Sam Laskaris
Local Journalism Initiative Reporter
Windspeaker.com

Owen Headrick has been playing hockey the majority of his life.

But things are drastically different this season for Headrick, a member of Garden River First Nation in northern Ontario.

That’s because the 25-year-old defenceman is in his first full season of professional hockey.

For the first time, Headrick is no longer a student/athlete. He can focus on just his hockey career and not have to concentrate on his schooling as well.

Headrick turned pro in January 2021. He left the University of Prince Edward Island Panthers midway through his final season of collegiate eligibility in order to sign with the Syracuse Crunch of the American Hockey League (AHL).

One of the main reasons Headrick opted to turn pro then was because he didn’t know when or if the Panthers would be able to resume their university season following a league-wide shut down due to the ongoing COVID-19 pandemic.

Headrick though played only three games with the Crunch before sustaining a season-ending injury.

He’s currently starring with the Idaho Steelheads, averaging more than a point per game, in the minor pro circuit simply known as the ECHL.

The circuit, formerly the East Coast Hockey League, is considered two steps below the NHL on the North American pro hockey ladder.

This past August, Headrick signed a contract with the AHL’s Texas Stars, the top affiliate of the NHL’s Dallas Stars.

The Texas squad assigned him to the Idaho team prior to the start of the 2022-23 campaign. Headrick has racked up 28 points (10 goals and 18 assists) in his first 27 matches with the Steelheads.

As of Jan. 10, he was tied for second in team scoring with fellow blueliner Patrick Kudla, who had appeared in 30 games.

Headrick is glad hockey is now his main focus in life and that he doesn’t also have to juggle his academics.

“It’s great,” he said of his pro lifestyle. “I get to play and hang out with the team all the time. And in my spare time I’ve been doing a lot of fishing.”

One of Headrick’s favourite fishing spots is a two-minute walk from his current home in Eagle, a city that is located about 15 kilometres from Boise, where the Steelheads play their home games.

Headrick is also enjoying the fact the Steelheads have been having quite a bit of success this season.

The team is currently sporting an impressive 27-4-0-1 record. Besides leading the standings in its seven-team Mountain Division, Idaho also has the best over-all record in the 28-club ECHL.

“We have a lot of good players,” Headrick said. “And we have a good amount of experience.”

The Steelheads’ roster also includes two individuals that had been drafted by Dallas in the NHL Entry Draft.

Also, though he was undrafted, Idaho goaltender Adam Scheel inked a pro deal with the Stars following a stellar three-year stint at the University of North Dakota.

Headrick believes the Steelheads are capable of having a lengthy post-season, possibly capping it off with a league championship.

“We have a pretty deep team as long as everybody stays healthy,” he said.

And though he would certainly welcome the chance to be called up to the AHL, Headrick won’t complain if he remains with the Steelheads to help the franchise capture some hardware.

“It’s not too often after minor hockey that you get to win a championship like this,” he said.

Though he was never drafted by an NHL club, Headrick has not completely abandoned the hope of one day playing in the world’s premier league.

There was a thought on whether to head to Europe for his first full season of pro hockey. But Headrick opted to stay on this continent, believing if an organization ran into numerous injury problems he would have a better chance to be summoned to a higher level.

“That’s why I wanted to stay in North America,” he said.

And now that he’s had a taste of pro hockey life, Headrick wants to continue earning a paycheque for playing the sport he loves for as long as possible.