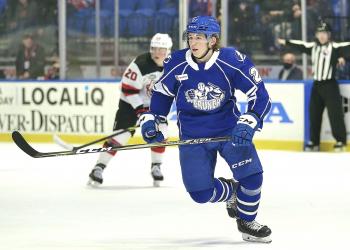 Owen Headrick, a member of Garden River First Nation, played his first game in the American Hockey League this past Saturday. Photo courtesy of the Syracuse Crunch

“I decided to focus on my hockey right now. I can always go back and finish (the Master’s degree) at some point if I want.” — Owen Headrick, a member of Garden River First Nation
By Sam Laskaris
Local Journalism Initiative Reporter
Windspeaker.com

Owen Headrick was hoping to conclude his university hockey career with a national championship.

Headrick, a member of Garden River First Nation near Sault Ste. Marie, Ont., had been serving as the captain of the University of Prince Edward Island (UPEI) Panthers this season.

He had hoped to lead the Panthers to a Canadian university crown in the spring.

But Headrick, a 24-year-old defenceman, left the Panthers this past week in order to sign a pro contract with the Syracuse Crunch of the American Hockey League (AHL).

Headrick said some other AHL franchises were also keen to sign him to a pro deal.

“I thought Syracuse was the right fit for me,” he said. “It’s a great organization and they have a really good pedigree.”

Headrick left the Charlottetown-based Panthers last Thursday to drive to the United States.

He inked his 25-game professional tryout contract with the New York-based Crunch last Friday. And then on Saturday he made his AHL debut, suiting up for the Crunch during its 6-3 road loss against a state rival, the Utica Comets.

Because he was generating some pro interest, Headrick said he considered turning his attention to pro hockey last month.

“I thought of leaving at Christmas time,” he said. “But I wanted to go back to the island and wait a few weeks.”

But the pandemic continued to create uncertainties and the Panthers had no clear indication of when they might be allowed to return to action.

“That was the biggest one,” Headrick said of the factors that contributed to the decision leave school midway through his fifth and final year of university playing eligibility.

Headrick said his schooling is now being put on hold. He had graduated with a Bachelor of Arts degree from UPEI this past April.

He returned to the school in September to begin classes in the Master of Education program. He is eight courses shy of finishing that degree.

“I decided to focus on my hockey right now,” he said. “I can always go back and finish (the Master’s degree) at some point if I want.”

After suiting up for the Crunch on Saturday, Headrick had to wait until Monday morning before he received some feedback from a coach on how he fared in his AHL debut.

Headrick said he had a chat with Syracuse assistant coach Gilles Bouchard at the team’s practice on Monday. Bouchard is in charge of the Crunch blueliners.

Headrick was utilized sparingly in the Saturday contest, though he did see some ice time in all three periods.

“He said it went well for my first game,” Headrick said of the assessment. “He could tell I was nervous and he said he put me in the right situations.”

Because of his offensive abilities, Headrick has been a key performer on the power play for various teams he has suited up for.

But for his Crunch debut, Headrick only saw action while clubs were playing 5-on-5.

Headrick is now hoping to impress the Syracuse brass so he can sign a regular AHL contract. The Crunch still has 21 regular season games remaining in the season after Headrick’s current tryout deal expires in mid-March.

For Headrick, this isn’t the first time in his career he has left a club in the university ranks in mid-season.

He had played two seasons for the Sault Ste. Marie Thunderbirds of the Northern Ontario Junior Hockey League before joining the Michigan-based Lake Superior State Lakers, an NCAA Division 1 squad, starting with the 2015-16 season.

But after spending one and a half seasons with the Lakers, Headrick decided his career would be best furthered by joining the Pennsylvania-based Erie Otters of the Ontario Hockey League (OHL).

The move paid off initially as Headrick and his Erie teammates captured the OHL title in 2017.

Headrick also spent the following season with the Otters. And then at the end of the 2017-18 OHL season, he got his first taste of pro hockey as he signed on with the ECHL’s Wheeling Nailers.

Headrick appeared in four games with the Nailers that spring.

But instead of pursuing a pro career after that, Headrick decided to return to university hockey, this time in Canada.

He had an immediate impact with the Panthers during the 2018-19 season, becoming a team leader by scoring 22 points, including five goals, in 28 matches.

Headrick continued to impress the following year, averaging more than a point per outing. He had 32 points (13 goals, 19 assists) in 30 contests.

For his efforts, Headrick was not only chosen as the Panthers’ MVP but he was also selected as UPEI’s male athlete of the year.