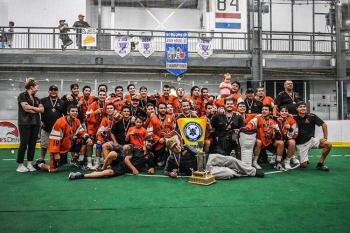 “I really feel our defence and our goaltending has been our strength all year. I think that will continue to be the case at the Founders Cup.” — Rebels’ captain Daylen Hill
By Sam Laskaris
Windspeaker.com Contributor

Earlier this decade the Six Nations Rebels were a powerhouse at the national level, winning four consecutive Founders Cup tournaments from 2011 to 2014.

The Rebels, a Junior B box lacrosse squad, however, have not competed at the Canadian championships since.

But they will be in Winnipeg this week vying to win the last Founders Cup of the decade.

The Rebels earned a berth into the seven-team national tournament, which begins Tuesday and continues until Sunday, by capturing the Ontario Lacrosse Association (OLA) title.

The Rebels needed a fifth and deciding game to defeat the Akwesasne Indians 3-2 in their best-of-final OLA championship series. Six Nations downed Akwesasne 12-9 in Game 5 held this past Wednesday.

“Winning the Ontarios was nice,” said Rebels’ captain Daylen Hill. “But I’m really looking forward to winning the Founders Cup. To me it would be a disappointment if we don’t win it.”

Hill, who will turn 21 this Saturday, is in his fifth season with the Rebels. He joined the Six Nations franchise the year after its last national title.

So he’d obviously like to conclude his junior career with a Canadian crown.

“It would be great,” he said. “It would be what I’ve been working for since I was a rookie.”

The Rebels were expected to fly to Winnipeg on Monday morning. Team officials were hoping to be able to schedule a practice for later today.

The Six Nations side will then kick off its tournament with an early game on Tuesday, squaring off against Quebec’s North Shore Kodiaks. The opening faceoff is scheduled for 11:15 a.m. EST.

The Rebels are entering the nationals without much knowledge about any of their opponents.

“As long as we play our game, we should be alright,” said Hill, who is in his second year serving as the Rebels’ captain. “I really feel our defence and our goaltending has been our strength all year. I think that will continue to be the case at the Founders Cup.”

Hill said his club has known for quite some time that it was capable of winning the Ontario championship this season.

During their season opener, back on April 12, the Rebels trounced the 2018 OLA champion Elora Mohawks 21-6.

“That put into our heads that we could win the West (Conference of the OLA),” said Hill.

He anticipated Six Nations would either have to face Akwesasne or the perennially tough Clarington-based Green Gaels in the league final.

Despite posting an impressive 19-1 regular season mark, the Green Gaels were upset in their opening-round playoff series.

Akwesasne gave the Rebels a pretty good run in the league final.

“Akwesasne was a great team,” said Six Nations’ head coach Dean Hill (no relation to Daylen). “The series could have gone either way.”

Dean Hill, a former professional player who spent 10 seasons toiling in the National Lacrosse League, was in his first season as the Rebels’ coach.

He had spent the previous four years serving as an assistant coach with the Six Nations Arrows, a Junior A squad.

Dean Hill was a member of the Arrows when they captured their national title, the Minto Cup, in 2015 and ’17.

And he’s not surprised the Rebels have advanced to their Canadian championship during his first year behind their bench.

“That was the goal of ours at the beginning of the year,” he said. “Right from the start I thought we had the guys in place to do it.”

The Rebels, however, did tinker with their roster at various points during the season. Besides bringing up some local players from the Six Nations’ intermediate squad, the Rebels also made a significant deal, acquiring Gregory Elijah-Brown, from the London Blue Devils at the trade deadline.

Elijah-Brown was a key contributor down the stretch for Six Nations and also in the playoffs, where he earned 17 points, including nine goals, in 12 matches.

All squads at the Founders Cup will have a hectic schedule, playing five round-robin contests in five days.

The two clubs with the best records following round-robin action will advance to Sunday’s gold-medal game.

There will also be a bronze-medal battle and a match to determine fifth and sixth place on Sunday.