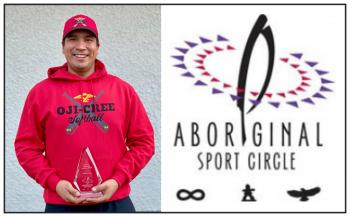 Patrick Leask is the 2021 male recipient of the National Indigenous Coaching Awards presented by the Aboriginal Sport Circle.

“Without this program, I never would have won this award. So, I’m putting it right back into the program.” — Patrick Leask on the $1,500 prize that comes with his national award
By Sam Laskaris
Local Journalism Initiative Reporter
Windspeaker.com

Patrick Leask has earned some recognition for the work he’s been putting in on ball diamonds.

Leask, a member of Sapotaweyak Cree Nation in Manitoba, has been selected as the 2021 male recipient of the National Indigenous Coaching Awards, presented by the Aboriginal Sport Circle, the national governing body for Indigenous sports in Canada.

Leask started Oji-Cree Softball this past February. The goal is to introduce the softball development program to as many children as possible, both Indigenous and non-Indigenous, in Manitoba.

Though his clinics were open to both girls and boys, Leask said one of the main reasons he started the program is that boys in the province have plenty of baseball options but limited softball choices. Softball features underhand pitching, using a larger ball than baseball. Girls, however, have numerous softball programs that they are able to join.

“In Manitoba there’s no opportunity (for boys) to play a league game or have practices,” he said.

Leask ran a dozen softball clinics throughout the province this past year. The clinics were for those at the under-6 to under-17 levels.

“We had 52 participants at one of the camps,” Leask said.

That camp was held in Leask’s First Nation.

Leask now lives in Brandon. He also held a pair of camps in his current hometown.

“Sport Manitoba helped me out financially to have the camps I had in Brandon,” he said.

All of the camps/clinics that Leask runs through Oji-Cree Softball are free of charge to children.

Expenses to operate the clinic are covered by the First Nation where it’s being offered.

“Every community that I go to they help out,” he said. “That’s how I promote that it is free for the kids.”

Leask was nominated for his national award by Cadin Dupasquier, the Indigenous community sports consultant for the Manitoba Aboriginal Sports and Recreation Council.

Leask said he had known for several weeks that Dupasquier had put his name forward as a nominee.

“I found out last week that I received it,” he said. “I was kind of shocked.”

Leask said he was surprised to receive such a prestigious award since this was the first year of his softball program.

Besides receiving a trophy, the national Indigenous coaching award comes with a $1,500 cash prize.

But Leask does not plan to keep the money for personal use.

“It’s going to be used towards my program,” he said. “Without this program, I never would have won this award. So, I’m putting it right back into the program.”

Besides running a dozen camps in various locations in 2021, Leask also fielded a boys’ under-16 team this year.

“We had to find teams to play against,” he said.

The squad ended up participating in 16 games, including several against teams that varying First Nations quickly put together. Though scores were kept in those matches, Leask did not pay much attention to them.

“It was mostly just to get the kids involved,” he said.

Leask also has some big plans for Oji-Cree Softball in 2022. He will continue to run camps throughout the province.

And he’s also planning to operate a few different teams. The hope is to operate boys’ travel squads at the under-15 and under-17 levels. He’s also eager to run a boys’ under-17 recreational club.

Leask will hold tryouts for those clubs in the new year. Both Indigenous and non-Indigenous players will be eligible to try to earn spots on the teams.

“I’m probably going to start in January,” he said, adding winter training sessions will be staged indoors. “And then in the spring we’ll get outdoors.”

During his first year of operating Oji-Cree Softball, Leask said he noticed there were a large number of Indigenous youth players who have plenty of potential in the sport.

“Since I’ve started this I’ve seen a lot of talent coming out,” he said.

Leask said he has not only witnessed it himself but various sports administrators from a number of First Nations have told him how keen players from their communities are about softball.

“These kids are out on the diamonds after school and in the summer just throwing the ball around for hours,” he said.

Leask has launched a Facebook page for his softball program, which can be viewed here: https://www.facebook.com/ojicreesoftball