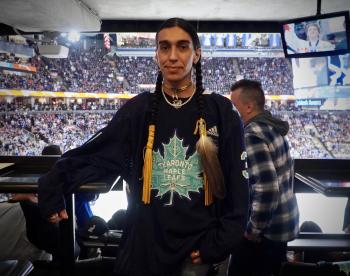 “The Maple Leafs are very popular. Everybody knows them. The last time they won a Stanley Cup they had George Armstrong, an Ojibwe man, as their captain. Maybe it’s time for another Ojibwe captain to come into the ranks.” — Kevin Eshkawkogan, ITO’s president and CEO.
By Sam Laskaris
Local Journalism Initiative Reporter
Windspeaker.com

Tyler Tabobondung Rushnell was on Cloud 9 during the weekend.

The 23-year-old artist from Wasauksing First Nation in central Ontario was provided with a box seat inside a guest suite as he watched his new favourite National Hockey League squad, the Toronto Maple Leafs, down the visiting Detroit Red Wings 4-1 at Scotiabank Arena.

Rushnell had even more reason than most diehard Leafs’ fans to celebrate. That’s because he designed the warm-up jerseys the Maple Leafs wore Saturday, Jan. 7, which was designated as the club’s Indigenous Celebration game.

“It means the world to me,” Rushnell said of the fact members of one of the world’s best-known hockey franchises wore sweaters that he designed. “It’s a dream come true. It’s so surreal. It’s such an amazing feeling.”

Rushnell said former NHLer Mark Fraser, who is currently the Leafs’ manager of culture and inclusion, reached out to him via his Instagram account this past September.

“I was really stoked at first,” Rushnell said. “I didn’t believe it at first so I had to check. From there we started talking and I had to send a few designs and get the one approved that they liked.”

Rushnell said it took him less than a week to finalize the jersey design the Leafs’ brass approved. It included a Tkaronto Maple Leafs’ logo and a shoulder patch of a thunderbird.

“I took a lot of inspiration from the leaf from my culture, the Ojibwe people,” Rushnell said. “You can see it a lot in my art on my Instagram.”

He has more than 15,000 followers on Instagram. Rushnell, who lives in Trenton, Ont., has spent the past half-dozen years working full-time as an artist.
He sells the majority of his work via his Instagram account @ty_rushnell

Rushnell agreed this past Saturday marked the highlight of his artistic career so far.

“It’s really an overwhelming feeling seeing my artwork in the Scotiabank Arena,” said Rushnell, who also designed Indigenous Celebration game banners that were displayed throughout the building.

Though he’s always enjoyed hockey, Rushnell admitted he did not grow up a Toronto fan.

Rushnell’s hoping there will be some additional impacts following his moment in the spotlight on the weekend.

“Hopefully some more sales for my artwork and hopefully younger kids to be inspired to create and do what they like and never give up,” he said.

“The Maple Leafs are very popular,” said Kevin Eshkawkogan, ITO’s president and CEO. “Everybody knows them. The last time they won a Stanley Cup they had George Armstrong, an Ojibwe man, as their captain. Maybe it’s time for another Ojibwe captain to come into the ranks.”

“To be part of the Leafs’ event like this is fantastic,” he said. “It’s something that needs to be done and more sports teams can do. Indigenous people love their sports and they’re sports fans of many teams, but especially they enjoy being part of Leafs Nation.”

Eshkawkogan said he would like to see the Maple Leafs and others do even more.

“One night a year is not usually enough,” he said. “This should be an everyday thing. Truth and reconciliation need to happen in every day of the year through all facets and everything that we do. As the original inhabitants of these lands, we’ve got lots to share with people and we’re willing to do it. We’re always welcoming people and never turning people away. Let’s share this land together.”

“To have the whole organization involved is amazing,” Eshkawkogan said. “More organizations are getting on board. We’re trying to do our small part with Indigenous Tourism Ontario to support the cause and help with reconciliation through education, and interact with tourism experiences. Sport tourism is a big thing for us. We’re trying to get more involved with sport in any way that we can.”

Eshkawkogan, a member of M’Chigeeng First Nation on Manitoulin Island in Ontario, added he was pleased to see Marian Jacko recently elected to Hockey Canada’s board of directors.

Jacko is a member of Wiikwemkoong Unceded Territory, also located on Manitoulin Island.

“To have a female Anishinaabe woman on the Hockey Canada board of directors, who is as intelligent as she is and with the experience that she has got, they’ve got a real asset in her joining that organization,” he said. “She’s going to do some great things for that organization and she’s going to help hockey evolve to a better place, a place that we can all be very proud of.”

“I think Maple Leaf Sports & Entertainment is finally getting on board to spreading the word that reconciliation does need to happen,” Peltier said. “And what better format and venue to do it at where you’re in the heart of Toronto and downtown Ontario that many people say is the heartbeat of Canada. So, this is where it needs to start.”