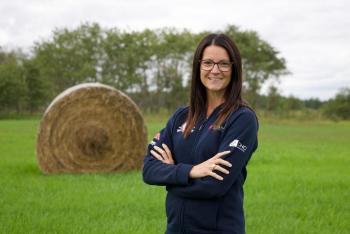 Kerri Einarson has been selected as the female recipient of the Tom Longboat Award.

“It was an absolute honour when they approached me and told me I was nominated.” — curler Kerri Einarson
By Sam Laskaris
Local Journalism Initiative Reporter
Windspeaker.com

After a few months of keeping it a secret, it’s become public knowledge that 2021 has been even more successful for Métis curler Kerri Einarson than was originally known.

It was announced this past Thursday that Einarson, who won a pair of national curling titles earlier this year, has been selected as the female recipient of the Tom Longboat Award.

Conner Roulette, a member of Misipawistik Cree Nation in Manitoba, who helped Canada win the gold medal at the world under-18 hockey championships, was named the male winner of the Tom Longboat Award.

The annual national awards, first presented in 1951, recognize the top Indigenous athletes in the country.

The Aboriginal Sport Circle (ASC), the national governing body for Indigenous athletics in Canada, has managed and presented the award since 1999.

“It’s definitely been a pretty amazing year,” said Einarson, who is from Camp Morton, Man.

For starters, she won her second consecutive Canadian women’s curling title by skipping a rink to victory at the Scotties Tournament of Hearts held this past February in Calgary.

A month later Einarson teamed up with Brad Gushue of Newfoundland to win her first Canadian mixed doubles championship. That event was also held in Calgary.

Einarson said ASC officials contacted her in the spring and told her they would be nominating her for a Tom Longboat Award. But she was still required to fill out some paperwork, detailing her accomplishments.

“It was an absolute honour when they approached me and told me I was nominated,” said Einarson, whose father Jeff Flett is Métis.

About a month after she was informed she would be a nominee, Einarson was told she would indeed be selected as this year’s female recipient.

But she was not allowed to spread the news widely until the ASC announcement this past week.

“I (only) told my immediate family about it,” she said.

Besides her parents, Einarson’s husband and their eight-year-old twin daughters have known about her award for a few months.

“To be honoured with this award is something special,” Einarson said. “And I’m very grateful for that.”

Einarson admitted she was not aware of the Tom Longboat Award before this year. But she said she was quite impressed with the list of previous recipients, especially Jordin Tootoo, the 2002 male recipient.

Though he was born in Manitoba, Tootoo grew up in Rankin Inlet, Nunavut and was the first Inuk to play in the National Hockey League (NHL).

Tootoo, who retired in 2018, appeared in 765 NHL contests, suiting up for the Nashville Predators, Detroit Red Wings, New Jersey Devils and Chicago Blackhawks.

Einarson, who is 33, said it was only recently that she became of aware of Tom Longboat, the legendary Onondaga runner who the national Indigenous awards are named after.

Longboat, who was born in the Six Nations community of Ohsweken in Ontario, won the 1907 Boston Marathon and represented Canada at the Summer Olympics the following year.

Einarson also said it was only last year that she herself received her Métis card.

The Manitoba Metis Federation (MMF) is a sponsor of her women’s curling team.

“I’m working with the Métis federation and learning more of my background since my grandparents died at an early age,” Einarson said, adding her father is also assisting with her quest to learn more about her ancestry.

Einarson said she has heard of Roulette but has not seen him play.

Roulette, 18, spent the past two seasons with the Seattle Thunderbirds of the Western Hockey League.

He was drafted in the fourth round, 111th over-all, by the Dallas Stars in this year’s NHL Entry Draft but is expected to return to the Thunderbirds for some more grooming this season.

ASC president Rob Newman praised both of this year’s recipients of the national awards.

“It is an honour for the Aboriginal Sport Circle to celebrate the achievements of these outstanding athletes through the Tom Longboat Awards,” Newman said. “Conner and Kerri are recognized within their sport and are inspirational role models for Indigenous athletes across the country.”

Both athletes have already been presented with their awards. And they have pre-recorded acceptance speeches. Those will be available for public viewing in October. During the 2021 Canada’s Sport Hall of Fame induction ceremony, which will be livestreamed Oct. 3, Einarson and Roulette will be recognized for their Longboat wins.