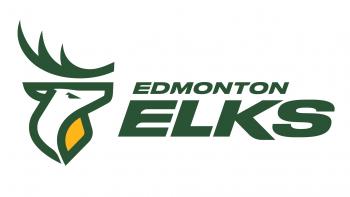 “We are looking forward to preserving our heritage and combining that with the opportunities to usher in a new name and new brand.” — Elks’ president and CEO Chris Presson
By Sam Laskaris
Local Journalism Initiative Reporter
Windspeaker.com

The Edmonton Elks were officially introduced on Tuesday. The renaming of the squad comes after years of calls to change the club’s “Eskimos” moniker, which had been in use since the squad joined the CFL in 1949. The team though had used the name since the late 1800s when it participated in the Alberta Rugby Football Union.

Natan Obed, the president of the Inuit Tapiriit Kanatami, a national organization that represents Inuit, had been among those asking for a change stating the old name was derogatory. The club officially dropped the name last July.

For the last 11 months, while club representatives worked on their rebranding efforts, the franchise was simply called the Edmonton Football Team or the EE Football Team. The plan all along was to maintain its original logo of a pair of golden E’s with a green background.

“Rebranding a team is hard,” said Elks’ president and CEO Chris Presson in a statement issued by the franchise. “Rebranding a team with 100 years of history is even more challenging and we worked hard to meld that history with something new and meaningful.”

The Elks’ team statement said the new name reflects the speed, strength and resilience of the Green and Gold and Northern Alberta. The franchise has captured the Grey Cup, the CFL championship, 14 times since joining the league.

Seven finalists were selected from those submissions.

Presson admitted allowing fans to voice their thoughts on the new name resulted in time-consuming work.

“Listening to everyone through engagement slowed the process but taking the time to listen allowed us to be rigorous and thoughtful in our pursuit of excellence,” he said. “The name was ultimately chosen by the fans. Elks finished first or second amongst all segments who participated.”

Respondents to the name-the-team survey were broken down into various demographic categories.

Actually, Elk was one of the seven names that had been originally shortlisted in the rebranding efforts. Other names being considered were Elkhounds, Evergreens, Eagles, Elements, Evergolds and Eclipse.

Elks instead of Elk started being contemplated afterwards.

And when team officials decided that would be the name they were leaning towards, Presson said they contacted representatives from the Oxford English Dictionary as well as a linguistics expert at the University of Alberta to see if Elks was indeed the correct plural use.

“It is proper. Especially in a team name it is more than acceptable,” he said. “And it is considered a proper noun. We chose it for a lot of reasons. We liked how it sounded. Frankly it’s more inclusive than the word elk.”

Though the franchise will maintain its original logo, it was announced yesterday that it will also have a secondary logo, one with antlers in the shape of a football.

Presson said the club’s players will have this new logo on their football helmets. It remains to be seen how the club’s two logos now will be utilized in other marketing efforts.

“We are looking forward to preserving our heritage and combining that with the opportunities to usher in a new name and new brand,” he said, adding he’s pleased the organization was able to maintain some of its history despite the name change.

“The entire process has been exciting,” he said. “It has allowed us to keep our iconic green and gold colours as well as the double E, while exploring new opportunities with our new primary logo, secondary logo and workmark. This merging of the old and the new allows us a continuation of our great history and tradition.”

Presson said the organization will soon form a committee so that the entire Elks’ staff can learn more about the Indigenous population.

It has yet to be determined when the Elks will actually hit the field. The entire 2020 CFL season was cancelled because of the COVID-19 pandemic.

The nine-team league, which also includes another Alberta franchise, the Calgary Stampeders, traditionally begins its regular season in June and culminates with the Grey Cup championship in November.

Because of the ongoing pandemic, the league’s 2021 tentative start has been pushed back until August.