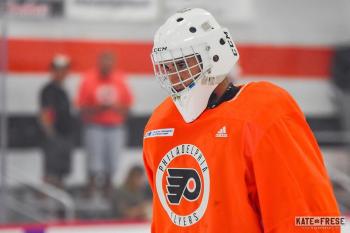 Roddy Ross is a member of the Canoe Lake Cree First Nation in Saskatchewan.

“The plan is to be in the NHL, but I’m not too sure how long it will take to get there.” — Roddy Ross
By Sam Laskaris
Windspeaker.com Contributor
SASKATOON

Though he grew up in Saskatchewan, Ross was a Washington Capitals’ fan. And he also rooted for the Montreal Canadiens, but that was primarily because his favourite player was Indigenous goaltender Carey Price.

Ross, a member of the Canoe Lake Cree First Nation in Saskatchewan, is now aiming for an NHL career himself.

And the chances of that happening increased dramatically as he was selected by the Philadelphia Flyers in the sixth round, 169th over-all, at the NHL Entry Draft held recently in Vancouver.

Ross is believed to be the only player with Indigenous ancestry selected in this year’s draft.

“I think that’s huge, especially with the support I have from my (First Nation) back home,” he said. “It’s really nice to have that.”

Ross did not travel to British Columbia to attend the draft in person. Instead, he watched the proceedings on television in his First Nation with various family members.

Hearing his name called was an unforgettable moment.

“It was a feeling I haven’t felt before,” said Ross, who turned 19 on July 4. “It was one of good emotions. I was so shocked it happened though.”

Ross has certainly been making a name for himself in 2019.

He started the 2018-19 campaign with the Camrose Kodiaks, members of the Alberta Junior Hockey League.

But on Jan. 1 it was announced he had signed a contract with the Seattle Thunderbirds in the higher calibre Western Hockey League (WHL).

Though he was a newcomer to the WHL, Ross shone during the second half of the season with the Thunderbirds. He posted an impressive 16-5-1-2 record and a 2.76 goals-against average.

“I wasn’t totally surprised,” Ross said of his performances with the Seattle squad. “That was the plan to go there and play well.”

Ross’ efforts with the Thunderbirds started garnering him attention from pro scouts. And he entered the NHL draft ranked as the 17th best North American goaltender available.

But he said he wasn’t keeping track of how many of the other netminders ranked ahead of him were being selected.

In fact, sensing he would in all likelihood be a late-round pick if he was indeed chosen at all, Ross didn’t even watch the entire draft.

The opening round was held on a Friday night. And then the second through seventh rounds were staged on Saturday.

Though he did start watching the draft proceedings when they resumed Saturday, Ross did take a break.

“I think I went out golfing that morning,” said Ross, who moved from his First Nation after the draft to Saskatoon so he could spend the remainder of the summer training with other WHL players.

But he returned in time from his draft day golf outing to hear the Flyers make him their sixth-round selection.

Shortly after that there was a phone call from a Flyers’ employee telling him to pack his bags and head to the U.S.

That’s because the very next day he had to head south of the border and prepare for the Flyers’ five-day development camp.

This camp featured 41 players, including six of the seven players Philadelphia selected in this year’s NHL Entry Draft. Flyers’ draftees from previous years were also at the camp, which was held in Voorhees, N.J., located about 25 kilometres from Philadelphia.

Ross was one of four goaltenders at the camp.

“I think I did pretty well,” Ross said, adding he did not previously know the three other netminders who attended the camp. “Some of those guys have been going to that camp for a couple of years.”

During the camp Ross and other prospects were introduced to various members of the Flyers’ organization.

But he said his favourite part happened off the ice. Camp invitees participated in a team bonding session by competing in a beach volleyball competition.

“I think the best part was beach day,” Ross said. “We had a lot of fun with that.”

Ross is expected to also receive an invite to the Flyers’ rookie camp, which will be held prior to the 2019-20 season. And he might also be on the list of the invitees of Philadelphia’s main training camp.

Ross, however, is expecting to be returned to Seattle for some more grooming. Besides playing another year with the Thunderbirds Ross could also conceivably return to the WHL as an overager during the 2020-21 season.

“I could play two (more) years in Seattle,” he said. “But we’ll see what happens.”

Ross though knows where he would eventually like to end up.