Demitri Harris wears many hats for pro-ball franchise in Vancouver 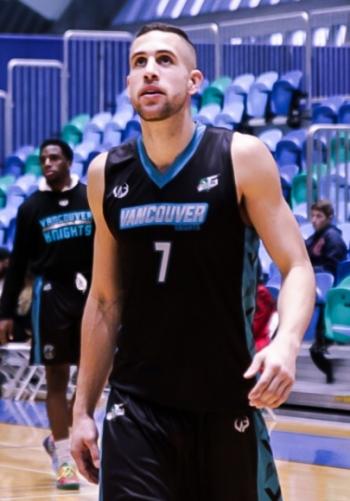 Demitri Harris still has fond memories of attending games and cheering on his hometown Vancouver Grizzlies. The National Basketball Association (NBA) franchise relocated to Memphis, however, when Harris was 11.

But professional basketball has returned to Vancouver now. And Harris, whose father Frank is Ojibwe, and has Wayandott and Chippawa ancestry, has several key roles with the Vancouver Knights. The Knights are one of eight franchises competing in the inaugural season of North American Premier Basketball (NAPB).

Regular season action in the league began on Dec. 31 and will continue until April 28.Harris, who is 6-foot-6, is one of the Knights’ star players. So far this season he’s been utilized as a shooting guard, power forward and small forward.

When he’s not starring on the court, Harris, one of just two Canadians on the Vancouver roster, is venturing out into the community to spread the word about the Knights’ existence.

“It’s pretty much a perfect fit for me,” Harris said. “I flourish in community relations. I love going to schools and out to groups to meet people.”

Though he’s playing pro basketball, Harris does not have a multi-million dollar contract like many of those toiling in the NBA. Salaries in the NAPB range from $1,500 to $5,000 a player per month.

Harris is unwilling to disclose how much he is making.

“My mother told me not to tell people that I’m rich,” he joked.

But since he is working for the Knights on and off the court, Harris said he is on the higher-end of the team’s salary scale.

Besides being Canadian – Toronto’s Jamal Mullings is the only other Canadian-born athlete on the Knights’ roster – there’s a good reason why the organization is counting on Harris to spread news of the team.

“I definitely have a little more of a network here,” said Harris, who has also coached various basketball programs in the city.

Vancouver is the only Canadian franchise in the eight-team NAPB. The circuit also includes two clubs based in the state of New York, the Albany Patroons and the Rochester Razorsharks.And the other entrants are Missouri’s Kansas City Tornados, Kentucky Thoroughbreds, Nevada Desert Dogs, Ohio Cardinals and the Washington-based Yakima SunKings.

Besides going to numerous NBA games when Vancouver had a franchise, Harris also recalls participating in a couple of Grizzlies’ youth camps.

“That inspired me to pursue a basketball career,” he said.

After his youth hoops career was over, Harris went on to play two seasons for St. Mary’s University in Halifax. But post-secondary schooling wasn’t the right fit for him. So he left school behind and ended up playing some semi-pro basketball, including stints with the Vancouver Balloholics and another Vancouver-based squad dubbed SB Battle.

Harris then moved up to the pro ranks. During the 2016-17 season he was a member for the majority of the season with the Island Storm, a squad based in Charlottetown, P.E.I., that competes in the National Basketball League of Canada, or NBL Canada as it is more commonly known.

Harris, who had limited playing time with the Storm, was released by the club prior to the playoffs.With the Knights now, Harris is one of the club’s starters. Early on this season he’s been averaging about 15 points and nine rebounds per game.

And he’s not too concerned the Knights, who are sporting a 4-6 record after their first 10 contests, managed to attract between just 100 to 300 fans to their first few home games. Harris is confident the franchise will soon be attracting considerably more fans.

“Basketball is a huge sport in Vancouver,” he said. “It’s just getting it out there of who we are and what we do.”Harris believes the NAPB will grow and become a successful venture.

“Every new business has its bumps and hiccups,” he said. “But I see in a few years this being a reputable league.”

Harris also believes the Knights will not be the only Canadian franchise in the league for long. He thinks there are numerous other hot basketball markets the circuit is capable of expanding too.

Already a franchise has been granted to Bellevue, Washington for the league’s second season. And Harris believes there are even several British Columbia cities that would support a club. He thinks the clubs could operate successfully out of Kamloops, Salmon Arm, Prince George and Prince Rupert.

Harris is not the only player in the NAPB this season with Indigenous ties. Joel Yellow Owl, a former collegiate star with the Oregon Tech Hustlin’ Owls, is toiling for the Yakima franchise. Yellow Owl has Blackfeet and Yakama ancestry.