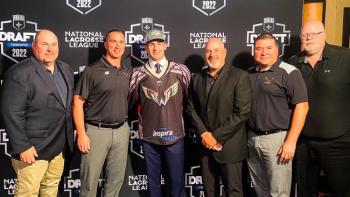 Deacan Knott, a member of Curve Lake First Nation, with the Philadelphia Wings' brass after he was selected in the National Lacrosse League Entry Draft.

“I know I’ll be going to (Philadelphia’s) training camp and I know I’m going to work as hard as I can while I’m there.” — goaltender Deacan Knott
By Sam Laskaris
Local Journalism Initiative Reporter
Windspeaker.com

It’s unlikely that Deacan Knott will pay off with some immediate dividends for the Philadelphia Wings.

But the National Lacrosse League (NLL) franchise has some high hopes for the 19-year-old member from Curve Lake First Nation in Ontario.

The Wings selected Knott, a goaltender, in the second round, 38th over-all, in the NLL Entry Draft held this past Saturday, Sept. 10 in Toronto.

“We’re excited for the future,” Paul Day, who is the head coach and general manager of the Wings, said of Knott. “And we think there’s a lot of good things to come for him.”

Knott was expected to be one of the 104 players selected in the six-round draft. But had it not been for an eagle-eyed Day, he might have sat around on draft day wondering what went wrong and why nobody had selected him, he explained.

Knott said he had declared himself eligible for the draft two months ago by filling out a form on the NLL website. He received an email confirmation his form had been received so he was preparing to attend Saturday’s draft to see which club would choose him.

But while searching the list of draft-eligible players last week, Day noticed that Knott’s name was not included. So, he called Knott to see what was up.

Knott resubmitted his desire-to-be drafted form to the NLL and this time made sure his name was added to the list.

Day then called Knott last Friday to tell him the Wings were interested in drafting him the following day. Philadelphia drafted two other players before they selected Knott late in the second round.

“I’m super, super happy that they did,” Knott said.

Day actually already knew quite a bit about Knott.

That’s because Day is also the general manager of the Peterborough Lakers, members of the Major Series Lacrosse. Knott toils for Peterborough’s Jr. A squad, also named the Lakers.

“I’ve known Paul for a little bit,” Knott said. “His cottage is near my house. We’ll probably be golfing sometime soon.”

Though he was toiling in the junior ranks, Knott was called up to the senior Lakers earlier this year. He served as a backup to Mike Poulin in the Lakers’ regular season opener.

Knott then went on to have a solid season with the junior Lakers. He appeared in 14 regular season outings, winning eight of those matches, and compiling a 9.53 goals against-average.

Knott and his teammates were then defeated by Toronto Beaches in four games in their best-of-five Ontario Junior Lacrosse League quarter-final series.

Knott’s season, however, was not quite over just yet. That’s because he went on represent Canada and help them win a gold medal at the International Indoor Junior Lacrosse world championships in Winnipeg last month.

Knott was named as the top goaltender at the six-team tournament.

It’s unlikely that Knott will earn a spot on the Wings’ roster for this coming NLL season, expected to commence in December. That’s because the Philadelphia squad has two other established league veterans, Zach Higgins and Angus Goodleaf, who are expected to handle the bulk of the Wings’ goaltending duties.

Knott will attend Philadelphia’s main training camp prior to the start of the season.

“He’ll likely end up on our practice roster,” Day said.

By being the Wings’ third-string goalie, Day said there’s also a good possibility that Knott might end up dressing for an NLL game this coming season.

“With COVID and other things going on, I think last year in eight out of our 18 games we used different goalies,” Day said.

Day added he’d prefer Knott receive his share of playing time this coming season. Most likely that will happen in the Arena Lacrosse League (ALL), a circuit in which individuals pay to play but is affiliated with the pro NLL.

Knott was a member of the Oshawa Outlaws this past winter in the ALL’s Ontario-based East Division.

“Last year helped me grow my game, even playing just a few games there,” said Knott, who dressed for six matches with the Outlaws.

Knott, who turns 20 on Sept. 20, said he’ll be content to be on the Wings’ practice roster while also in all likelihood continuing to hone his skills in the ALL with the Outlaws.

“I know I’ll be going to (Philadelphia’s) training camp and I know I’m going to work as hard as I can while I’m there,” he added.