Costs announced for 2030 Indigenous-led Olympic and Paralympic bid in B.C. 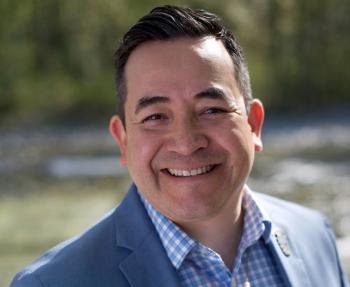 Sxwíxwtn, a spokesperson for the Squamish Nation.

“I hope that the financial estimates are reassuring that it is not only feasible to host these Games, but it is beneficial to all of our communities.” —Wayne Sparrow, chief of Musqueam Indian Band
By Sam Laskaris
Local Journalism Initiative Reporter
Windspeaker.com

At a news conference held on Friday, July 8 it was announced that all organizational and operating costs for both the 2030 Olympics and Paralympics, led by First Nations in British Columbia, would be covered by private dollars. Costs are expected to be between $2.5 billion and $2.8 billion.

And it has been revealed that the publicly-funded estimates for both Games is between $1 billion and $1.2 billion.

The private funding estimate is virtually the same that it cost to run the 2010 Winter Olympics and Paralympics that were primarily staged in Vancouver.

The public funding estimate, however, is significantly down from the $1.9 billion in public money that was required for the 2010 Games.

Representatives from four First Nations – Squamish, Lil’wat, Musqueam and Tsleil-Waututh – have joined forces with officials from the Canadian Olympic Committee (COC) and Canadian Paralympic Committee (CPC) to spearhead bids for the proposed Games.

The group revealed details of the hosting concept last month. At the time it was announced that financial details for the bid would be forthcoming.

That information was made public this past Friday.

Sxwíxwtn, a spokesperson for the Squamish Nation, is pleased additional bid information has now been shared.

“We welcome the thoughtful work that has been done by all partners so far to support this vision,” he said. “The hosting concept focuses on sustainability while also making investments in new rental housing and sporting venues to create a legacy for Indigenous and non-Indigenous people that will remain long after the Games end.”

To keep publicly-funded costs down, organizers will rely heavily on using venues that were utilized during the 2010 Winter Olympic and Paralympic Games staged in Vancouver. Games’ officials have identified a dozen venues they would like to utilize in 2030.

A total of $669 million was spent to build facilities for the 2010 Games. Upgrading these venues for 2030 is expected to cost between $299 million to $375 million, so more or less half the costs spent two decades earlier.

Also, if the Games are indeed awarded to B.C., more than 1,000 housing units, which would initially be part of the athletes’ village, would be constructed, creating some desired housing stock and affordable units in the region.

“It’s a real mix of the housing needs of the community,” said Mary Conibear, the impact and legacy lead for the 2030 Games’ feasibility team.

Conibear said estimates for public funding required is down from costs in 2010 in large part because advancements in technology have significantly reduced the proposed security and safety expenses.

Conibear said about 2,000 members of the military were required to guard access to some outdoor venues back in 2010.

Several Indigenous leaders praised the efforts of those involved with the bid and the effects it could have.

“The 2030 Games has the potential to have lasting impacts and benefits for the host Nations, broader Indigenous peoples and the larger society by building a stronger social fabric moving forward in reconciliation and the power of sport,” said Dennis Thomas-Whonoak, who is the technical team lead for Tsleil-Waututh Nation. “We are paddling to a brighter future and welcome the opportunity to showcase the good work that has taken place so far and the potential investment into our collective futures.”

Dean Nelson, chief of Lil’Wat Nation, is thrilled with his First Nation’s contributions towards the bid.

“We take great pride in this opportunity to be one of the four host Nations for an Indigenous-led 2030 Olympic and Paralympic Games,” Nelson said. “Having our Indigenous voice and presence in the forefront of a high-profile event occurring on our traditional lands is of utmost importance. It is an opportunity for us to share our history and culture. An Indigenous-led Games will be a true representation of our origins, where we are now, and what we envision for the future.”

Wayne Sparrow, the chief of Musqueam Indian Band, is hoping Friday’s financial announcement eases the minds of many.

“We know the public is eager to hear what the cost of the 2030 Games will be,” Sparrow said. “And I hope that the financial estimates are reassuring that it is not only feasible to host these Games, but it is beneficial to all of our communities.”

Tricia Smith, the president of the Canadian Olympic Committee, said “These Games present an incredible opportunity, and this is a responsible approach to investing for the future,” she said. “The operational costs will be covered privately, while public investment will be focused on building needed housing, providing security efficiently and ensuring the necessary rejuvenation of existing infrastructure.”

Gail Hamamoto, the vice-president of the Canadian Paralympic Committee, also likes what she has heard so far from bid organizers.

“The feasibility team has done excellent work in creating a responsible and resourceful financial plan for a potential Games in 2030,” she said. “An Indigenous-led 2030 Games offers an incredible opportunity for a sustainable, economically conscious, and fully inclusive Olympic and Paralympic Games with lasting legacies for communities in British Columbia and the entire sport system in Canada.”