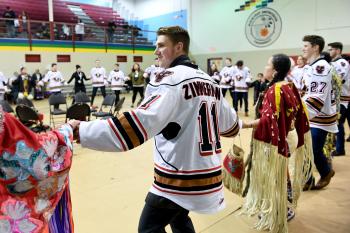 The Calgary Hitmen, one of 22 teams that compete in the WHL, will expand their connection to the Siksika Nation in Alberta by hosting a game titled Every Child Matters on Feb. 1.

That match, which will be held on a Saturday afternoon, will be against the Red Deer Rebels and staged at the Hitmen rink, the Scotiabank Saddledome, which is also the home of the National Hockey League’s Calgary Flames.

The contest, which will be dedicated to Indigenous youth empowerment through sport, is being presented in partnership with the Siksika Health Services as well as the First Nations Health Consortium.

The Siksika Nation is hoping the Hitmen will provide the youth some inspiration—again.

This past January, the Hitmen staged one of their practices in Siksika Nation, located about an hour’s drive southeast of Calgary.

January’s event also featured a Q and A session involving members of the Hitmen brass and coaches from Siksika’s hockey association.

Rob Kerr, the Hitmen assistant manager of business operations, is hoping the Every Child Matters outing becomes an annual event on the team’s schedule.

“I don’t want to look at this as being just a one-off or a theme night,” he said.

Tyler White, the CEO of Siksika Health Services, would also like to see Every Child Matters turn into a yearly game on the Hitmen calendar.

“We didn’t want to be one and done,” White said of wanting an ongoing relationship with the WHL squad and not just cutting off ties after the Hitmen practice held earlier this year. “We wanted to continue our positive messaging.”

The Hitmen currently have three other yearly matches. This includes a Teddy Bear Toss when fans throw a stuffed toy onto the ice after the Calgary club scores its first goal of a game. Toys collected at that match are distributed to local agencies.

The Hitmen also have an annual Be Brave match, an anti-bullying affair, and also this fall started a Bret The Hitman Hart Night, in support of the Calgary Prostrate Cancer Centre. Hart, a former pro wrestler, is a founding owner of the Hitmen franchise.

White said the Every Child Matters game is not affiliated with the annual Orange Shirt Day, which has the same motto.

“We respect that movement and we’ve reached out to them for their support,” he said.

White said both Hitmen and Siksika officials believe a lot of good can come from the Every Child Matters game.

“Hockey is taking a bit out of beating right now,” White said, alluding to the numerous incidents of players speaking out about the inappropriate actions of their former coaches. “We see this as a positive experience for everybody involved.”

White is glad his First Nation is continuing its relationship with the Hitmen.

“At that initial practice we had in January, a lot of the youth were talking about what’s next,” he said.

Both Kerr and White are also thrilled the Feb. 1 game will be televised nationally on Sportsnet. It will also be broadcast on Windspeaker Radio at www.cfweradio.ca and http://www.cjwe.ca

At this point not many details have been announced about the activities surrounding the match. But the Siksika Nation will be looking to showcase its culture.

To this end there are expected to be Indigenous dancers and drummers showcasing their skills inside the Saddledome. Organizers are also trying to contact various Indigenous role models, including former pro hockey players, to be part of the festivities.

Kerr believes today’s youth, and not just Indigenous ones, do not have as many people to look up to as previous generations did.

“I don’t think it’s an Indigenous issue,” he said. “I think it’s a societal issue. Now we’re just trying to give them a chance to see some positive role models.”

Siksika Health Services has purchased 2,000 tickets for the Every Child Matters game. Kerr said the plan is to give away the tickets for free to members of the Siksika Nation. Siksika, one of the largest First Nations in Canada, has about 3,500 members living at home and about the same amount of members living away from the First Nation.

Kerr is confident a large number of Siksika members will be interested in attending the contest in Calgary.

The Hitmen roster this season includes one Indigenous player, second-year forward Riley Fiddler-Schultz, who is the nephew of Vern Fiddler (Metis), who played 14 seasons in the National Hockey League before retiring in 2017.

Like his nephew, Fiddler is also in the WHL this season. He’s an assistant coach with the British Columbia-based Kelowna Rockets.