Arrows bolt Ontario Lacrosse Association to be first members of new league, but some displeased by the move 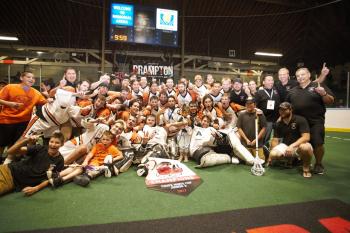 Six Nations Arrows team photo is from 2017, the last time they won the Minto Cup championship.

“The sky is the limit in terms of the expansion and the development that can happen in the future.” — Arrows’ president Lewis Staats
By Sam Laskaris
Local Journalism Initiative Reporter
Windspeaker.com

The Six Nations Arrows, perennial contenders in Ontario’s Junior A lacrosse league, have announced they are breaking ranks with their circuit and heading into uncharted territory.

In a Zoom call on Monday with team players and media members, Arrows’ general manager Jake Henhawk revealed the Six Nations organization is no longer part of the Ontario Lacrosse Association.

Instead, the Arrows plan to compete in the newly formed Tewaaraton Lacrosse League (TLL), which was officially announced on Tuesday.

Six Nations is the first club to publicly announce plans to compete in the inaugural season of the TLL, which is hoping to kick off with an Ontario-based Junior A circuit this June.

Henhawk said the TLL is planning to include an affiliated junior league in coming years, as well as divisions for Midget, Bantam and Peewee players.

Henhawk said the Arrows are waiting for other Junior A franchises to make constitutional changes to their boards before they can join the TLL.

The new league will deviate from OLA regulations and will adopt all rules currently employed by the professional National Lacrosse League (NLL).

“This is something we’ve been discussing for the past number of years,” Henhawk said. “It’s no disrespect to the Ontario Lacrosse Association but they just can’t offer our players today and more importantly in the future what we want for our players and that’s the best chance possible to play in the National Lacrosse League.”

The Arrows’ organization has been around since 1974. The franchise, originally called the Six Nations Braves, played one season in the OLA’s Junior C ranks before making the jump to the Junior B level.

The organization was renamed Arrows in 1980 but didn’t make the move up to the Junior A league until 1990.

Since then the Arrows won the OLA championship nine times and also went on to capture the Minto Cup, the national Junior A crown, five times, most recently in 2017.

The TLL has some lofty goals.

Henhawk said though it will commence as an Ontario-based league, a goal is to have a national championship as early as this year but more than likely starting in 2022.

Henhawk added the TLL plans to expand and include clubs from both Alberta and British Columbia as soon as possible.

“If I was a betting man, Alberta would be in yesterday and we’ll have a lot of consideration from a lot of teams in B.C. as well,” Henhawk said.

He added the plan is to have TLL teams from Ontario, Alberta and B.C. playing each other during the regular season and not just at a national tournament.

Henhawk said it has yet to be determined what sort of budgets TLL teams would require in order to be playing squads from different provinces in regular season matches.

“We’re going to be speaking to some airlines about potential partnerships as well to help alleviate those costs,” Henhawk said. “If we’re going out there or if they’re coming here, they’re going to be coming here for a week or two at a time to play numerous games.”

Henhawk said discussions will be taking place with officials from box lacrosse organizations in the United States.

“We’re pretty excited about taking this step and going to another level with this,” said Arrows’ president Lewis Staats.

Staats is confident many others will follow the Arrows and join the TLL.

“The sky is the limit in terms of the expansion and the development that can happen in the future,” he said.

Because of the COVID-19 pandemic, box lacrosse franchises in Canada had their entire 2020 campaigns cancelled.

It remains to be seen where the pandemic is headed this year but Henhawk is confident lacrosse will be making its return.

Henhawk said the TLL will be unlike the OLA, which has its box lacrosse games primarily from late spring to August.

The TLL is planning to stage various camps and clinics and have different showcases throughout the fall and winter as well. Henhawk said tournaments would potentially be held throughout Canada and the United States during the months of October, November and December.

Not all those from Six Nations, however, are in favour of the Arrows leaving the OLA.

Cody Jamieson, an Arrows’ graduate who is now playing pro with the Halifax Thunderbirds and is one of the NLL’s most respected players, tweeted his displeasure on Tuesday.

“This news comes as a slap in the face to not only myself, but the alumni and community that has embraced the Arrows for decades,” Jamieson said on Twitter. “Ontario has been home to the best lacrosse talent for years, and our small community has stood against the likes of Orangeville, Whitby, Peterborough.”

Jamieson also said he does not support the Arrows leaving the OLA to join the TLL.

“I will do whatever I can to find out more about it,” he said. “Our dreams were to win a Minto Cup. I wanted to win another as a coach for my community. This is horses**t.”

Tyson Bomberry, who won the Minto Cup three times with the Arrows and is now a member of the NLL’s San Diego Seals, is also not in favour of the move.

“Playing for the Arrows was never about preparing for the NLL,” he tweeted. “It was about winning the Minto for our community, with my childhood friends and teammates. All of us dreamed about the chance to be able to win one Minto. Sucks to see that kids won’t have that option with the Arrows.”