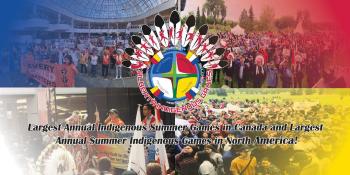 “We heard about this opportunity of an adult division and started recruiting people. It was like living out our youth dreams.” —Teala Ward of Enoch Cree Nation
By Sam Laskaris
Local Journalism Initiative Reporter
Windspeaker.com

A record of about 4,500 athletes will be participating in this year’s Alberta Indigenous Games (AIG).

That’s a significant increase from the 2,700 athletes that competed at the games last year.

The 2022 event, which will primarily be held in Edmonton, will begin on Thursday, Aug. 11, with the games’ opening ceremonies scheduled for 1 p.m. (MT). Those will be held at the Ice Palace at the West Edmonton Mall.

Competitions will then start on Friday and continue until Aug. 18.

A total of 15 sports will be contested. All will be held in Edmonton, except the archery competitions, which will be held in Sherwood Park, located about a 20-minute drive east.

Jacob Hendy, the CEO of the AIG, isn’t surprised to see the popularity of the games, which started in 2011 with about 300 competitors.

“It’s been growing and every year we get more communities coming,” he said. “They love it.”

The games are now billed not only as the largest annual summer Indigenous games in Canada but in North America as well.

In the early years, the AIG were staged every two years. It became an annual event when the games were held in back-to-back years in 2017 and ’18.

The AIG were cancelled in 2020 because of the COVID-19 pandemic but returned with a bang last year. The 2021 event attracted about 600 more participants than the games had prior to their last year before the pandemic.

Hendy said many are seeing the benefits and values of having youth from their communities take part.

“This year a lot of leaders and chiefs and councils are paying for everybody from their community to come,” he said.

For example, Chief Conroy Sewepagaham believes it’s vital for youth from his Little Red River Cree Nation to be a part of the games. The First Nation is located about a nine-hour drive north of Edmonton.

Sewepagaham said his First Nation will cover the transportation and hotel costs, as well as all meal expenses for those participating athletes from his community.

“I’d rather see our youth playing sports on courts, rather than ending up in the other ‘courts’,”

The most popular sport, in terms of participation, will be volleyball.

And the games are no longer restricted to youth. That’s because organizers have added adult basketball categories for both women and men ages 22 to 30.

“It’s a new wrinkle this year,” Hendy said. “This is like a test run.”

Hendy said games’ officials will decide whether to add adult groupings for other sports in future years.

Teala Ward of Enoch Cree Nation will be one of the adult basketball players at the games this year.

“I heard about the games growing up, but I never really had the chance to compete,” Ward said. “We heard about this opportunity of an adult division and started recruiting people. It was like living out our youth dreams.”

Ward said it’s important for children to see adults competing in the games.

“Now that we’re adults and have kids, they too can be part of this dream while watching us competing creating great memories,” she said.

Besides competing in individual or team sports, participants are also aiming to win points towards their community total.

A total of six community divisions are offered, depending on the size of each and how many athletes they are represented by at the games.

“Whoever gets the most points in each division gets a trophy and a banner,” Hendy said.

And that has inspired many athletes to suit up for their own community teams when possible.

“Instead of having all-star teams, people now want to play for their community,” he said.