Travel with the spirit of building nation-to-nation relationships 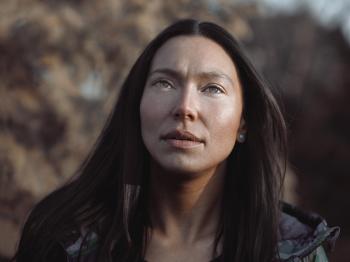 With a similar colonial history, Australia and Canada have a lot in common. Our Indigenous communities were targeted with the same genocidal systems. Our people were removed from the land, our cultures were dismantled, our people were disenfranchised, and our babies were taken.
By Sarain Fox
Partner of The TreadRight Foundation
Ambassador to the Manitobah Mukluks Storyboot School

I just returned from a two-week-long trip to Australia. The TreadRight Foundation, in partnership with the KARI Foundation, invited me to Sydney to help them launch a cross-cultural sustainability program.

The goal of the project is to help keep Aboriginal cultures alive in urban environments and to share that culture with visitors.

As an Anishinaabekwe visiting Aboriginal territory in another country, I was immediately struck by the similarities of our protocols and worldviews. The first thing the youth leaders from KARI did was welcome me with a proper “welcome to country” (the traditional way people are welcomed between neighbouring territories). The process involved contextualizing the land, the people, the animals and plants around us and then water was blown on my head for safe travels. I sat for a smoking ceremony, similar to smudging, and shared a song.

I didn’t hesitate to accept the invitation for this trip because I’ve seen the type of work that the TreadRight Foundation, a not-for-profit organization created as a joint initiative between The Travel Corporation’s family of brands, is doing first-hand to make travel matter by safeguarding three key pillars: people, wildlife and planet.

It’s their ‘People’ pillar, and the various projects under that banner that directly work with and affect Indigenous communities around the world, that I’ve had the honour of witnessing in real life. One such project that’s near and dear to my heart is hosted right at home, in downtown Toronto, where we have built a similar program in partnership with Indigenous-owned footwear brand Manitobah Mukluks and the Bata Shoe Museum called the Manitobah Mukluks Storyboot School.

The idea behind the school is to keep the traditional art of mukluk making alive and to share that cultural knowledge with the world. Most visitors to Canada typically don’t interact with Indigenous people, even though there is a huge desire to. This program offers an Indigenous-led, authentic way to connect with the local cultures. I went to Australia, excited to share the success of this program and to learn more about the work they wanted to do in their communities.

With a similar colonial history, Australia and Canada have a lot in common. Our Indigenous communities were targeted with the same genocidal systems. Our people were removed from the land, our cultures were dismantled, our people were disenfranchised, and our babies were taken.

It’s no surprise that our communities now experience similar rates of suicide, poverty and a lack of access to cultural knowledge. The KARI Foundation is determined to build cultural pride from the ground up. They are a community organization that works with vulnerable people by providing essential services intertwined with cultural programming.

Similar to what is happening here at home, they are also contributing towards cultural resilience in Australia. By engaging with and utilizing the power of Indigenous arts and tradition, we are filling a cultural void that has long been left vacant by government. The rematriation of Indigenous knowledge, whether it’s from my own Anishinaabe culture or that of the Gadigal people of Sydney, is leading our communities back to their cultures, arts and languages. This partnership will allow for community-directed programing that also connects non-Aboriginal travellers to unique and authentic experiences.

It serves as the perfect model of “making travel matter” by offering travellers a chance to learn about Indigenous world views while keeping traditional arts alive. Bead by bead, dot by dot Indigenous people around the world are being inspired to reclaim who they are and share it with the world.

I was inspired to see Aboriginal youth in Australia bring song, dance, art and stories to the community – it reminded me of what we are witnessing in Canada – empowered to share their culture with visitors. In my view, that is precisely what travel and interacting with local communities is all about. When you connect human to human, you allow for true 'nation-to-nation' building.

Most importantly, the project will support Aboriginal communities in Sydney by offering them an opportunity for economic self-determination as the grant provided by The TreadRight Foundation will provide employment for KARI staff and artisans.

It’s amazing to see this program take off in Australia – rolling out first with Contiki, the youth adventure travel brand, on their East Coast Australian adventures that visit Sydney – knowing it was modelled after the Manitobah Mukluks Storyboot School in Toronto, following its continued popularity among Indigenous and settler students alike.

With a commitment to encouraging the cultures, traditions and arts of the communities they visit, the TreadRight Foundation is really walking-the-walk by partnering with Indigenous businesses and organizations to build authentic travel experiences. I hope this inspires a new generation of travellers to do the same when they travel abroad; to learn about the cultures that have existed there for thousands of years and connect with them in a real way. It’s time we truly #MakeTravelMatter.