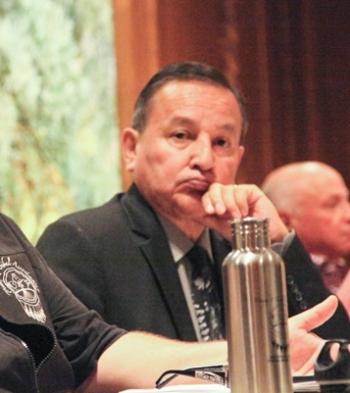 August 9th marks International Indigenous Peoples Day, the anniversary of the first meeting of the UN Working Group on Indigenous Populations in 1982.

The Union of BC Indian Chiefs celebrates the achievements and fortitude of Indigenous peoples worldwide. Indigenous peoples continue to lead the global fight for the protection of our lands, territories, and the environment for future generations.

Grand Chief Stewart Phillip, President of the UBCIC, stated, “A decade is too long to wait for real action on the implementation of the Declaration. If these are the internationally recognized minimum standards to ensure our human rights as Indigenous peoples, why are we seeing only empty promises from Prime Minister Justin Trudeau?”

Kukpi7 Judy Wilson, Secretary-Treasurer of the UBCIC, commented, “Next week I will be in Geneva at the United Nations, presenting to the Committee on the Elimination of Racial Discrimination. This is Canada’s report card to the world, and we Indigenous peoples won’t let them get away with the rhetoric we continue to hear at home.”

Chief Bob Chamberlin, Vice-President of the UBCIC, remarked, “We have an opportunity in Canada to be the world leader in human rights that we purport to be. Respecting Indigenous peoples’ rights, domestically and internationally, is a moral and legal imperative.”