Opinion: Historic terrorism by the government is still practiced in Canada 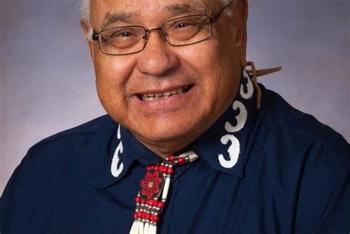 The RCMP use their violent authority, their powers of arrest to manhandle our Elders and our women. That is blatant disrespect.

As a member of the Traditional Government for the Mi’kmaq Nation for the district of Epekwitk (Prince Edward Island) I fully support the Heredity Chiefs in British Columbia and their members who are fighting to maintain that Indigenous law is the rule of law in their land.

It is important for all Canadians to understand why we Mi’kmaq, a people looking out on our Atlantic shores, care so much about what is happening on the other side of the continent within sight of the Pacific.

It is because we share a common experience. Our highest courts have recognized indigenous law. On Dec. 11, 1997, the Supreme Court of Canada in Delgamuukw v. British Columbia set a precedent for how treaty rights are understood in Canadian courts, affirming the recognition of oral testimony from Indigenous people, a cornerstone of our traditional ways.

Yet, the RCMP use their violent authority, their powers of arrest to manhandle our Elders and our women. That is blatant disrespect. We have deep respect for our Elders and our Indigenous women because they carry, give birth to life and care for our children.

Tense terrorist actions against our people by the RCMP clearly shows us that the historic terrorism by the government of Canada and the RCMP is still practiced in this country. It is sad indeed to see our Elders, women and other people arrested for protesting the destruction of their environment, our Sacred Mother Earth and her precious water, fish, berries, plants and animals. We depend on these for healthy food for now and for future generations of people, whether Indigenous or non-Indigenous.

Here on our beautiful P.E.I., Mi’kmaq ancestors never surrendered any territory to the British Crown or the Crown in right of Canada. This means that under the provisions of the Royal Proclamation of 1763 we still own all of what is now called Prince Edward Island.

The Royal Proclamation also stated “but that, if at any Time any of the said Indians should be inclined to dispose of the said Lands, the same shall be purchased only for Us, in our Name, at some public Meeting or Assembly of the said Indians, to be held for the purpose by the Governor or Commander in Chief of our Colony…”

They put this in the Royal Proclamation because there was so much fraud on the part of the colonial powers. This caused much friction between the British and the Mi’Kmaq. It also guarantees that one or two Mi’Kmaq people can’t make a deal with the government to sell any land. The sellers and the government must take any sale to the Assembly of Mi’Kmaq.

The 1763 Royal Proclamation forbid British governors from granting the right to survey or settle any lands which had not already been sold to the Crown, or might be sold by treaty in the future. British subjects later settled throughout our lands in violation of what we considered treaty right to keep them and their resources.

By comparison, most of British Columbia was settled—and continues to be settled—without any treaties. British Columbia First Nations maintain that they have never given up any of their Aboriginal land rights. On Dec. 11, 1997, the Supreme Court of Canada agreed with the British Columbia Hereditary Chiefs that they had the power over their traditional lands and that their laws prevailed on the Delgamuukw decision.