Opinion: Cornwallis gone, General Jeffrey Amherst should be next 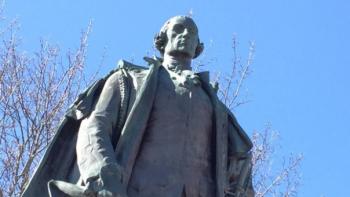 I’m elated that Halifax City Council has voted to remove the statue of British Colonial Governor, General Cornwallis, from that park in Halifax and put it into storage until they can decide what to do with it.

Please allow me to suggest that they send the statue to England given that Governor Cornwallis was guilty of numerous atrocities against Indigenous Peoples including Search and Destroy orders to wipe out the Mi’kmaq People by putting bounties on the scalps of the Mi’kmaq.

We’re very thankful for Mi’kmaq Elder and historian, Dr. Daniel Paul, whose years of research and effort have resulted in the removal of this offensive statue. I’m also pleased that the Mi’kmaq Chiefs of Nova Scotia have insisted that the statue be removed in support of the efforts of Dr. Daniel Paul and the many grassroots Mi’kmaq People who worked on this very important issue for many years.

It’s obvious that the federal, provincial and some municipal governments in Atlantic Canada mistakenly believe that the British Military conquered the Mi’kmaq People. However, we, the Mi’kmaq, were never conquered nor did we surrender our territory in Epekwitk (PEI) or the rest of the Atlantic Region to the British.

As a result of inaccurate, colonial, racist, Euro-centric attitudes that are rooted in a belief that we were conquered, Mi’kmaq place names that were thousands and thousands of years old were replaced. In addition, the installation of statues of British Generals and Governors was offensive to the Mi’kmaq People because those British generals’ main intent was to exterminate the Mi’kmaq People.

General Jeffrey Amherst also committed terrible atrocities against the Indigenous peoples of what is now Canada and the United States of America. General Amherst’s main intention was to exterminate all the Indigenous People of North America, including Canada.

The following are some excerpts from General Amherst’s handwritten letters, now available at the USA Library of Congress in Washington DC:

Colonel Henry Bouquet to General Amherst, dated 13 July 1763, [262k] suggests in a postscript the distribution of blankets to "inocculate the Indians";

Amherst to Bouquet, dated 16 July 1763, [128k] approves this plan in a postscript and suggests as well "to try every other method that can serve to Extirpate this Execrable Race." These letters also discuss the use of dogs to hunt the Indians, the so-called "Spaniard's Method," which Amherst approves in principle, but says he cannot implement because there are not enough dogs. In a letter dated 26 July 1763, Bouquet acknowledges Amherst's approval [125k] and writes, "all your Directions will be observed."

Given the sensitivities that are also associated with General Amherst’s efforts to exterminate the Mi’kmaq, I trust that the Federal Government’s Minister Responsible for Parks Canada, the Hon. Catherine McKenna, will remove General Amherst’s name from the Parks Canada Site at Rocky Point Prince Edward Island in the spirit of national reconciliation that seems to be animating our friends in Nova Scotia.

Mi’kmaq Grand Council for the District of Epekwitk (PEI)