Opinion: Chiefs refuse to give their endorsement to sacred languages legislation 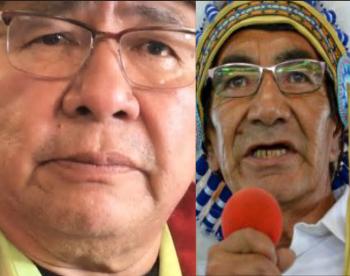 "We are the rights holders who are not giving our consent to Bill C-91." — Okimaw Henry Lewis from Onion Lake Cree Nation.

Our language is a sacred gift of our Creator. Our Nations entered into Treaty with the Crown in right of Great Britain and Ireland using our languages. After Treaty making, the state of Canada spent over a hundred years through the residential school system and other assimilative polices trying to stamp out our languages.

Despite the stoppage of the residential school system, Canada continues to control our education system and our languages. Now, they want to legislate our languages, putting them in a box for the rest of time. A box controlled by the state of Canada in complete violation of our Treaties.

Our languages are alive, they are sacred and we will not give Canada any control of our languages through their colonial legal framework.

"Wicekaskosiw Sakahikan has spent our own monies for an immersion school to teach our nehiyaw language to the future generations of children,” said Okimaw Henry Lewis from Onion Lake Cree Nation.

“We had no support or technical help from the state of Canada. We know that without financial support, these empty boxes mean nothing."

Our Nations cannot support the creation of legislation on our languages. It is a violation of the Treaties.

"When the Crown entered into treaty with our ancestors, they were assured that we could continue to live as we had always lived – this included speaking our languages," said Xakiji (Chief) Lee Crowchild, Tsuut'ina Nation.

Onion Lake, along with three other Nations (Ermineskin, O'Chiese and Tsuu t'ina) filed an urgent action with the United Nations Committee on the Elimination of Racial Discrimination (CERD) in July 2018 on the process that Canada was undertaking in relation to its aggressive legislative agenda.

The four Nations requested international assistance because Canada is using organizations who are not rights holders to manufacture consent.

In 14 December 2018, CERD sent a letter to Canada via their mission in Geneva, expressing their concerns that the right of free, prior and informed consent of our Nations was not recognized in the creation of the legislation.

Canada has been asked to submit a response by 8 April 2019.

What is Canada's response going to be? More of the colonizers' trick and slights of hand using organization to give them cover. This is not an acceptable process to the UN as we had outlined the whole process of manufacturing consent to show Canada gives the appearance that Indigenous Nations agree with their unilaterally created agenda.

This bill is a continuation of the residential school process. We will provide CERD with our own report on 8 of April 2019.

Then, CERD can compare the reports and make their own decisions about how Canada is upholding international standards through the Convention on the Elimination of All forms of Racial Discrimination.

We are the rights holders who are not giving our consent to the bill. We are the ones who are upholding our sacred gifts, while Canada continues on the colonizers path.