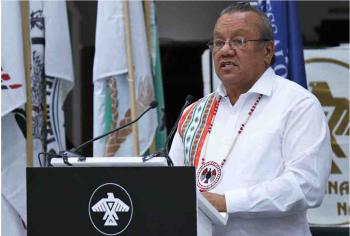 On Friday June 17, 2022, the Assembly of First Nations (AFN) Executive Committee and national Board of Directors voted to suspend National Chief RoseAnne Archibald, effective immediately. The decision was made in response to statements made by National Chief Archibald at the Chiefs of Ontario Annual Chiefs Assembly and in public statements she released last week.

The Chiefs of Ontario (COO) supports the mandate and the integrity of the AFN, as an organization. COO will continue to work with the AFN to ensure that it can promote and protect the interests of First Nations across Canada and in Ontario.

The National Chief appeared at the Chiefs of Ontario Annual Chiefs Assembly on Wednesday, June 15 and made comments that contained inaccuracies and appear to have breached AFN employees’ right to privacy and confidentiality. In her subsequent statement, released on Thursday and Friday, she claimed that the Ontario Chiefs-in-Assembly had passed a resolution requiring the AFN to install an oversight body over the AFN’s Executive Committee. No such resolution was passed: Resolution 22/27A, passed by the Ontario Chiefs-in-Assembly, supported the continuation of the mandate of the AFN’s Restructuring Committee. That resolution did not call for the creation of a body to oversee the AFN’s Executive Committee.

“The AFN is a vital and effective organization. National Chief Archibald has made some very serious allegations about the AFN and its employees and we have yet to see any evidence supporting her claims.

In her statements over the past few days, National Chief Archibald called our national organization corrupt, and disclosed confidential information about employees. She called for the dissolution of the AFN’s operations, whose 200 employees work hard to fulfill the directions set out by the National Chiefs Assembly. It should be noted that AFN’s annual, regular audits have not indicated any impropriety. I have great confidence in the integrity and responsibility of the AFN. That said, if a forensic audit is necessary in order to address the National Chief’s allegations, then perhaps that is what should occur. Transparency is a key part of integrity and accountability.

It is very regrettable that in her statements, the National Chief has attacked and undermined the very same organization she was elected to lead and to which she has a fiduciary obligation. The investigation underway into the complaints against her will continue. Until the results of that independent investigation are complete, the AFN must be able to continue its vital work and protect the privacy and well-being of its employees.

The AFN’s decision to suspend National Chief Archibald was necessary in order for it to ensure it could fulfill those obligations. The Chiefs of Ontario will continue to support the AFN as it does this work.”