‘I’m angry, I’m hurt’ from a wound that cannot heal 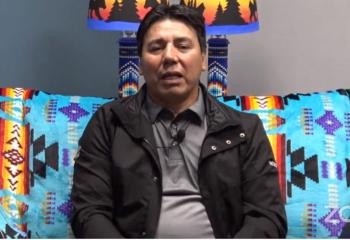 Reading statements about residential schools, and particularly about the discovery of the 215 children's bodies discovered at the former Kamloops Indian Residential School, may trigger strong emotions. If you are having difficulties in dealing with these thoughts and feelings and are in need of support, call the Indian Residential School Survivors Society emergency crisis line at 1-866-925-4419. Help is available.

This video was sent to us from Grand Chief Arthur Noskey. (Note that the statement in English begin at 4:10 on the video.) It is focused on the Grand Chief’s thought and feelings about the discovery of the remains of 215 children found in an unmarked mass grave on the grounds of the former Kamloops Indian Residential School in British Columbia.

Noskey says the news of the discovery “provokes anger in me as a leader. I’m angry, I’m hurt… It’s as if this wound cannot heal.” It’s a hurt that’s always there and being agitated.

He said he feels for the Elders and the residential school survivors who are facing another trauma, and said he hopes they can take the time to talk with the people around them to express their own hurt and their feelings.

“With that comes healing,” said Noskey in an often emotional address.

He reminded viewers that there is upwards of 6,000 children who are not yet accounted for across the country; “that never made it home after the residential school process.”

Noskey is calling on the federal and provincial governments to come to the table to discuss how we look for those who are missing.

He said the churches need to “fess up” to the atrocities of the past.

He said his Uncle Felix used to tell him about the babies that students could hear crying in the night, sometimes for two or three nights, then ‘all of a sudden babies don’t cry anymore.’

Felix said that no one took them away from the school, because students knew of the comings and goings from the schools. He would say, ‘They’re probably in there somewhere still.’

Noskey said it’s time to provoke the governments to do a search of every former residential school and insist it “is done adequately and to our comfort that it’s done.”

He said his consolation is that he knows that the children who died in residential schools are in the “presence of God”.

“I know we’re resilient. We’ll go through this together.” What’s needed is to unite under the “purpose of who we are as a people,” said Noskey, and inform the world of this so it never happens again.