Effect of mercury contamination on skin and spirituality in Grassy Narrows: The remediation plan 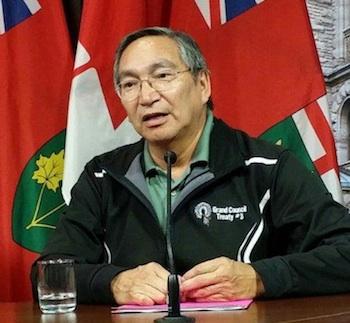 The Government of Ontario has pledged $85 million to support a comprehensive remediation plan that aims to locate all sites of contamination in Grassy Narrows. The then provincial minister of Environment and Climate Change, Glen Murray, spoke about the commitment in a 2017 interview.

“If you ask me when would I like to have done this? Fifty years ago.”, said Murray. “I have never seen a case of such gross neglect.”

Grassy Narrows is a community of 951 reserve residents situated on the Wabigoon-English River system. Grassy Narrows Chief Simon Fobister describes the river as the “lifeblood of [his] people”.

Unfortunately, from 1962 to 1970, more than 9,000 kg of mercury were dumped into the river by the paper mill industry located upstream in Dryden, Ont. The contamination devastated the Asubpeeschoseewagong First Nation, who thrived off hunting, fishing, and culturing rice in the river.

The locals have suffered immensely from speech difficulties, tremors, memory problems, and nerve loss in the hands and face as a result of three generations of mercury poisoning. Chief Fobister has two grandchildren who are severely affected by mercury poisoning. One has difficulty with coordination and balance, while the other has trouble with memory and concentration.

“They are never going to grow up to be normal”

“They have to go to appointments in Winnipeg with a neurologist about every month. There is no help.”

Fobister receives $250 a month; however, he claims that the payment “doesn’t even meet my nutritional needs...I suffer every day.”

The inorganic salts of mercury are corrosive to the skin. The presence of mercury in water has been associated with an increased incidence of itchy skin, skin rashes, or skin irritation. As a result, there have been many water advisories in the Grassy Narrows community that promote minimal bathing.

Not taking regular baths can worsen skin infections, eczema, psoriasis, and other skin conditions. Many investigations have hypothesized that the skin problems can be related to reactions to chemicals in mercury; however, most of the information available today, especially specific to the Grassy Narrows’ community, is largely anecdotal.

Susan, a woman in Grassy Narrows First Nation, explains her experience of dealing with the skin rashes on her 18-months-old daughter’s legs.

"She likes to take a bath, but [the water] irritates her skin."

Debora is a resident of Grassy Narrows who shares a very similar experience about her nine-year-old son. She attributes contaminated tap water to be the cause of her son’s skin rash.

“I sponge him with bottled water from the jugs, clean him that way. My son has scarring now from where the rash broke out. It’s not inflamed now, but he will have an inflammation once in a while. It won’t go away totally, because of the water.”

When mercury contaminates the water supply, it bioaccumulates, meaning that it collects in the human body from the consuming of contaminated fish and even contaminated breast milk. This bioaccumulation explains why, even after three generations, Japanese researchers found that 90 per cent of Grassy Narrows residents still experience signs of mercury poisoning.

However, the frequency of these ceremonies has lessened, and therefore their sense of identity has been affected.

The project will be led by John Rudd, a federal researcher who has extensive experience with the Grassy Narrows community since 1980 and had a record of mercury cleanups in the U.S. The legislation further includes the establishment of a panel containing two seats for Grassy Narrows and Wabaseemoong and two members to represent the interests of Ontario to steer the project.

The province has already spent $5.2 million to sample the extent of contamination and contribute to the pre-cleanup work. The preliminary work will establish sources of contamination, which have been hypothesized to either be from disposal sites or the chlor-alkali cells under the floors of the paper plants.

Efforts to begin cleanup started in early 2018. A few approaches have been proposed, including the dilution of inorganic mercury by adding clean sediments and injecting nitrate into lakes to prevent bacteria from converting mercury to toxic methyl mercury. Rudd estimates that it will take five years for mercury levels to drop after the clean-up process begins.

One of Dr. Rudd’s colleagues, Dr. Da Silva believes that the youth of Grassy Narrows will also benefit from being exposed to the science of the river system. They will be empowered by being able to participate in the remediation process.

Despite wide recognition that the source of contamination is industrial, taxpayers will be responsible for funding the clean-up. In 1979, the Ontario government struck a deal with the paper industry indemnifying them of environmental liability for “enabling the modernization” of Dryden. However, they do contribute an unspecified amount to the $17 million compensation package to residents of Grassy Narrows affected by mercury contamination.

Chief Fobister is optimistic that the set-up of this provincial trust fund will ensure that the promise of clean water will be fulfilled no matter who is in power. The clean-up will be an important step towards minimizing skin conditions and restoring spirituality in the community.

However, Fobister wants to remain vigilant until the people of Grassy Narrows “have the dignified support and care that they sorely need”.