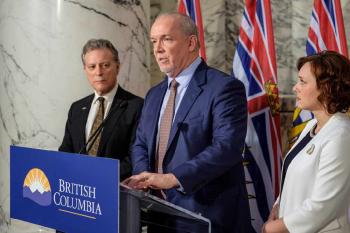 The British Columbia government will complete construction of the Site C hydroelectric dam, saying that to do otherwise would put British Columbians on the hook for a $4-billion bill, with nothing in return. Premier John Horgan said the previous Liberal government had pushed the project to the point of no return.

“It’s clear that Site C should never have been started. But to cancel it would add billions to the Province’s debt – putting at risk our ability to deliver housing, child care, schools and hospitals for families across B.C. And that’s a price we’re not willing to pay,” said Horgan.

Assembly of First Nations National Chief Perry Bellegarde tweeted BC government’s #SiteC decision disappointing and completely contrary to #reconciliation - We stand with #Treaty8 as they continue the fight to stop this project.

Horgan responded to the critics with this statement: “When it comes to reconciliation and working with Indigenous leadership, look there has been over 150 years of disappointment in BC. I’m not the first person to stand before you and disappoint Indigenous people.”

B.C. Regional Chief Terry Teegee said in a press statement “I am disappointed that in spite of their stated commitment to fully implement the UN Declaration on the Rights of Indigenous Peoples they have chosen to proceed with the destruction of the Peace River and the abrogation of Treaty 8 rights.”

He said the NDP government failed its first test to all Indigenous Peoples.

West Moberly First Nation and Prophet River First Nation have announced their intention to obtain a court injunction to halt construction of the project and to comence a civil action for Treaty infringement.

“It was John Horgan’s NDP that demanded a Site C inquiry by the BC  Commission, and the results they received from it were clear: no need for the power, better alternatives once we do, and no advantage to ratepayers to proceed.” With those findings, the only responsible choice was to immediately stop destroying the Peach River valley,” said Chief Roland Willson.

Grand Chief Stewart Phillip is quoted saying the NDP government has inflicted irreparable harm on the NDP brand and is hanging by a thread. Stay Tuned, the Site C fight continues.

He recalled a “stunt”, when John Horgan stood beside a sign saying Site C Sucks. Says NDP will pay the price in the next election.

President of the Nuu-chah-nulth Tribal Council Judith Sayers tweeted she had no faith in the NDP government to reconcile with First Nations.