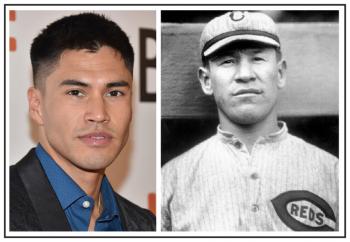 “As Native Americans it is crucial that we tell our own stories. Thorpe's is a vital one, and 'Bright Path' will break barriers.” —Mohegan chairman Kevin Brown
By Deb Steel

Originally published by Windspeaker.com May 8, 2018

In 1912, the multi-discipline, two-time gold-medal Olympic champion from Sac and Fox Nation represented the United States “while his citizenship went unrecognized during a period of cultural genocide against Native Americans,” reads the Hollywood Reporter, which announced the project. Thorpe went on to play Major League Baseball, professional football and founded the organization that became the NFL.

Sterlin Harjo, a member of the Seminole Nation with Muskogee heritage, wrote the original screenplay. He has criticized big Hollywood for its portrayal of Indigenous peoples. "It's not up to Hollywood to change Native representation in the media,” he says on his website. “They have failed at it for decades. It's up to us…”

Jolie says “I have had the privilege of spending time with Bill Thorpe, and will be listening to and guided by the Tribes and the Thorpe family in the making of this film.”

Financing for the film will come in part from the Tuolumne Band of Mewuk Indians, the Mohegan Tribe, the Yocha Dehe Wintun Nation, the Tonto Apache Tribe and the Bear River Band of the Rohnerville Rancheria.

“Our father’s accomplishments in life are a great source of pride to us,” said Bill Thorpe.  Burt Lancaster starred as Thorpe in a previous film called Jim Thorpe: All American. That was six decades ago.

“Our family has heard of dozens of attempts to bring this story to modern audiences, but we have never shared the vision of a movie until the authentic portrayal in Bright Path,” said Bill. The lead actor Sensmeier is Tlingit, Koyukon-Athabascan descent.

“As Native Americans it is crucial that we tell our own stories,” said Mohegan chairman Kevin Brown. “Thorpe's is a vital one, and Bright Path will break barriers.”

Jim Thorpe’s traditional name was Wo-Tha-Huck, which means "Bright Path". He was born on May 22, 1887. And he shone as a natural athlete on the path he walked throughout his life.

In the 1912 Olympic Games in Stockholm, Sweden, Thorpe entered the five-event Pentathlon track and field contest and the 10-event decathlon. Sport writers called him an "upstart" who came out of Oklahoma—“Indian Territory”.

Thorpe would set a long-standing record in the decathlon scoring 8,412.955 out a possible 10,000 points to finish 700 points ahead of his nearest rival.

King Gustav of Sweden placed a laurel wreath atop Thorpe's head, and hung the gold medal around his neck. The King took Thorpe's hand and proclaimed: “Sir, you are the greatest athlete in the world.”

Six months later, however, scandal hit. Thorpe was accused of being paid for playing baseball and branded a professional athlete. He was stripped of his amateur status, his name erased from the Olympic record and his medals and trophies taken away.

(After some 70 years, Thorpe’s amateur achievements would be restored. The Olympic Committee voted to give Thorpe's medals to his family and clear his name.)

Thorpe went on to professional sports, batting .358 for the New York Giants. He played for the Boston Red Sox, and the Cincinnati Reds. He once hit three home runs in one game.

Then he entered another phase in his sporting life, playing football with the Canton Bulldogs of Canton, Ohio, home to the National Football League Hall of Fame. In college, Thorpe had been an All American in 1911 and 1912 at a small Indian school called Carlisle.

In 1919 Thorpe was elected first president of the American Football Association later to become the National Football League.

Thorpe was married three times and had eight children. He settled in the California town of Lomita, and died there in 1953 at the age of 66.

In 2002, breakfast cereal maker General Mills decided to honor the great athlete’s memory with his picture on the box of Wheaties, The Breakfast of Champions.

"My dad had a bowl of cereal almost every day for breakfast and, of course, we had Wheaties," said Thorpe's 80-year-old daughter Grace.

"He was very modest and humble when it came to all of the attention. But he would be very honored to be recognized by The Breakfast of Champions," she said.

The announcement was made in the Pennsylvania town named after Thorpe. And it was made at Jim Thorpe High School. Afterwards a parade was held to celebrate the occasion. Among those who marched in the parade were a number of children who had written letters to Wheaties' officials asking them to honor Thorpe.

"Jim Thorpe is the archetypal Wheaties champion and it is easy to see why his story is so inspiring to school-age children in America," said Brian Immel, Wheaties' marketing manager at the time. "Wheaties is honored to have a role in keeping the legend of Jim Thorpe alive.

"Jim Thorpe is a hero among school children and this Wheaties box is dedicated to every child in America who, like Jim Thorpe, is inspired to pursue a dream."

Anna McKibben also played a part in getting Thorpe’s picture on the box.

When she was crowned Miss Indian USA in 1998, McKibben said she was inspired by Thorpe's story. And she wanted to offer some payback by campaigning to have Thorpe on Wheaties' box. She wrote to every American Indian newspaper, to tribal headquarters and to Native Web sites in 35 states. The response was tremendous.