A study on First Nations skateboarders and the state of exception 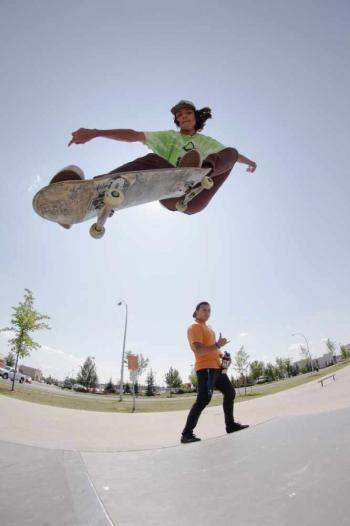 I have been skateboarding for 20 years, and for the past several years I have had the privilege of coaching and mentoring First Nations skateboarders.

Skateboarding takes hours and hours of practice to learn basic maneuvers; it is a sport that requires continual repetition and progression. I have seen First Nations skateboarders become some of the best in Alberta; their passion and physical strength to battle through difficult tricks and their courage to push their limits sets them apart.

As a result, I believe that First Nations skateboarders can overcome any obstacle. Yet at times these obstacles appear to be insurmountable; there are no role models and few resources — just a board and a backpack.

First Nations skateboarders are a part of the subculture of skateboarders that historically has been looked down upon and viewed as rebellious towards society. That is changing, though; more and more skateboard parks are popping up across Canada, and skateboarding is making its debut at the 2020 Olympics in Tokyo, Japan.

Society is slowly coming around to see skateboarding in a more positive light, and it will likely become a valued international sport. Unfortunately, First Nations skateboarders are not receiving the help they need to succeed; often their parents are unable to drive them to skateparks or buy them new boards. This leads to constant breaks from training and leads them to find other sources of entertainment, which many times become detrimental to their mental and physical health.

They need financial and verbal support: talent may not be enough for them to succeed. They also need more educational support. The lack of expectation to work hard in school and get their diploma has led many to think that skateboarding is all that they have.

One thinks of the Nazi prison camps in which the Jewish people were tortured: they were physically and legally placed outside the juridical order and outside of society. In the camp, the state of exception becomes the permanent reality. This state of exception is only possible because the camp is both physically and juridically outside of society.

The camp becomes a permanent spatial arrangement that is found outside the normal state of law.  This means that “the normal law is suspended” and the only thing that stops atrocities from occurring is the civil and ethical sense of the sovereign. Since the spatial arrangement is outside, the sovereign tends to be less accountable for its actions.

In Canada, many First Nation skateboarders live on reserves; these reserves are actual separate spatial arrangements. The reserve is a physical piece of territory that is outside of the city and away from society. Many great skateboarders end up on the reserve and little is seen of them again. There is no way to observe what happens there, because it is outside. What makes the First Nations skateboarders a “camp” is the reality that they have been placed “outside”: this results in their needs being ignored.

It should not be normal in Canada for under-aged students to consistently fail to attain an education: the government is certainly aware of the rates of educational success and poverty among First Nations skateboarders, yet little is changing.

I estimate that 60 per cent or more of the First Nation skateboarders I have worked with will not advance to the next grade; often they can barely read in middle school. If these kids were Caucasian, would they have the same lack of support? Would the rate of educational success be acceptable if they were Caucasian? Of course not, but the First Nations skateboarders are an Agamben-like camp. Nobody cares about what happens to people in a camp: they are out of sight, out of mind.

Giorgio Agamben uses the term “state of exception” in comparison to prison camps in the First and Second World Wars. Those camps were places where the state of exception became the normal rule of life. Basic human rights were stripped away from the people in order to protect national security.

The state of exception which would be a temporary loss of state law became a permanent place outside of the normal state of law. In regard to First Nations skateboarders, have they lost their rights to basic education for the sake of national security? Is the government afraid of them becoming too educated? It should not be the normal that 50 per cent will not attend post-secondary education.

I have witnessed several First Nations skateboarders that were either a year behind in their studies or in the process of dropping out of school completely. This is a tragedy. Having seen tragedy after tragedy with First Nations skateboarders, one begins to think that this must be a state of exception. How could such a disastrous system be the norm?  Perhaps it’s just a temporary state of exception, but if it remains, appalling events will occur.

Prominent First Nations skateboarder Judas Bugler has said, “I try to go to school, but mostly I don’t have a way.” How is it possible that a Canadian youth is not able to get to school? Because a hidden matrix still exists: Agamben speaks of a “hidden matrix” as a place in the law of the state where the state decides to go into a state of emergency or permanent crisis. The state is then able to take away the rights of its people and do as it pleases.

Although there is no state of emergency for First Nations skateboarders, the hidden matrix here is that the state has a secret place within itself. A matrix where the truth is concealed (we’re not really gonna help them). A place like that has to be hidden in a nation that speaks so often of equal rights. Transportation to school is a basic right; in actuality, the state is ignoring the basic rights the First Nation skateboarder needs to attain education. This type of ignorance comes from a hidden matrix; if it were not hidden, there would be an uproar.

Agamben has said that “the camp is the most absolute bio political space’’; since in the camp the sovereign power does not think about the well-being of the people; rather, the primary focus is to put life in order. In the context of First Nations skateboarders, the sovereign does not care about the well-being of the people. How can they? Among First Nation communities the rates of suicide and suicide attempts are four to five times that of the general population.

If the government is aware of this, how are they truly caring for the wellbeing of the First Nations skateboarders? How is the state exercising its power to help these people? The state is not putting life in order; if the suicide rates were this high among all peoples, this would be labelled an epidemic. People are dying here. This is not just lack of educational support; the people are so despaired by their conditions they are killing themselves. Is there any hope that the First Nations skateboarders can get out of the camp?

Skateboarding is the way out. It teaches people to dream and aspire for something they cannot see. The skateboarder often gets vision for a new trick that is beyond their current abilities, but with hard work and practice they are able to make the trick. This ability to visualize progression and to attain it is not a one-time event but a continual process for the skateboarder.

First Nations skateboarders have learned this discipline from skateboarding, and this discipline is transferable to all areas of life. If they are given the right tools to succeed, anything becomes possible. As Mark wrote in his gospel “All things are possible for one who believes” (Mark 9:23, English Standard Version). The First Nation skateboarder has learned to believe, and that is the way out of the camp. A person willing to believe and work hard to see something happen is able to do anything.

In my experience of coaching skateboarders, the most important quality is the ability to fight. If skateboarders cannot fight, they will never succeed in doing the difficult tricks. Not all skateboarders have this ability; but the First Nations skateboarders tend to embody it, as though they were born for this battle.

Skateboarding is certainly a battle. Some tricks can take up to 90 attempts; only those with fierce mental and physical strength can succeed. It takes a warrior to be a great skateboarder. Giorgio Agamben uses the term “homo sacer’’ at times to refer to the sacred. I believe this idea of sacred is what enables the First Nations skateboarder to fight and succeed.

First Nations have a long history of being warriors and hunters; when I see them skateboarding, I see something sacred at work. I do not see them as youth playing with a wooden toy; I see them as warriors fighting an epic battle—through blood, sweat, and tears they attain victory. At last, the sacred gifts possessed for generations come to life in First Nations skateboarders.