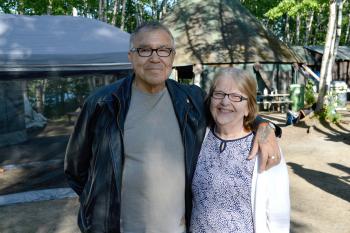 Influential Northern Elder Ann Batisse has passed. She was well known throughout Canada for her work in developing many Indigenous organizations in the north. She is pictured with her husband Elder Mario, an Indigenous leader and organizer.

“I’ve always believed that we have to keep working and dedicating ourselves to creating new projects for the betterment of our community, our families and our members. There is nothing worse than inaction and doing nothing." —Elder Ann Batisse
By Xavier Kataquapit

Elder Anna May Batisse (Nichols) passed away on Friday March 20 at the age of 70 after fighting a long illness. She was surrounded by her husband Elder Mario Batisse and loving family at the Keepers of the Circle in Kirkland Lake.

Keepers of the Circle, an Indigenous family care organization, was partly founded through the work of Ann Batisse, her husband Mario and their extended group of advocates, family and friends.

Elder Ann Batisse, whose family holds connections to Golden Lake First Nation, had a long career of working with Indigenous organizations for the betterment of individuals, families and communities as a whole.

Ann Batisse, who was originally from Smith Falls, Ont., attended her post secondary education at Royal Roads University in Victoria, B.C. where she achieved a Masters of Arts in Leadership. She then started her career path with the Dene Nation in Yellowknife where she had the opportunity to work with Indigenous leaders, including Stephen Kakfwi and Bill Erasmus.

“I always remembered how the people of the Dene Nation took me in when I started and treated me like family. Their kindness and openness gave me the inspiration to continue that lesson and do the same for others in passing it on,” Ann said during an interview in November 2019.

After 13 years in the far north, she moved back to Ontario and took a position with the newly-created Nishnawbe-Aski Nation (NAN) organization in the late 1980s to work on an initiative for child care services for First Nations in northeastern Ontario. She worked with the northern chiefs and she became a key person who led the development of what would become Kunuwanimano Child and Family Services, which was incorporated in May 1989.

The development of Kunuwanimano also brought together the communities of northeastern Ontario in the eastern district of the NAN territory, which were not organized as a group at the time. The collective work of some of the chiefs of Kunuwanimano went on to create the founding of Wabun Tribal Council which occurred in October 1989.

She helped to establish several economic development projects including the construction of a dedicated community complex for Matachewan First Nation. The complex was opened by the membership in October 1997 in her honour as the ‘Ann Batisse Community Centre’.

“I’ve always believed that we have to keep working and dedicating ourselves to creating new projects for the betterment of our community, our families and our members. There is nothing worse than inaction and doing nothing. It is one of the lessons that I learned from so many mentors and a practice that I do my best to teach others,” said Ann in an interview before her passing.

She also led the development of multi-million-dollar training programs, such as the Matachewan Aboriginal Access to Mining Jobs Training Strategy (MAATS) and the Aboriginal Women in Mining Program, which went on to secure employment in the mining industry for Indigenous men and women.

In 1997, Ann Batisse, with the support of her husband, started the development of the Temiskaming Native Women’s Support Group (TNWSG) as a way to develop an organization to advocate, support and empower Indigenous women.

“When we started the women’s group 22 years ago, we worked with many young people who showed potential to work for us. I’ve watched many of them over the years enter into our support circle first to seek help and then grow to become mentors themselves and become capable of assisting others. I’ve always believed in helping our future generations to become part of the solution to helping our people and it feels so good to see it all happening today,” said Ann.

The TNWSG has grown from a small office in Kirkland Lake to owning, controlling and renovating their own multi-use office building with additional offices in New Liskeard.

Ann Batisse had gone on to take the women’s group platform to create programs to assist First Nation women and, by extension, their families in community projects, child care programs, health and medical programs, job training programs and employment projects through partnerships with industrial and mining companies. These programs include Keepers of the Circle, Mino M’shki-ki Indigenous Health Team and Aboriginal Women In Mining.

“The women’s group has created a safe space for our First Nation women and a sisterhood of support that they can rely on for help in many ways. It is our way of dealing with and preventing the tragedies that befall Indigenous women who are historically marginalized by society,” said Ann.