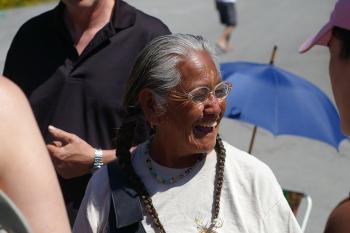 “Harriet served nine of her 14-day (jail sentence) and then she caught pneumonia. When she was hospitalized, doctors discovered she also had lung cancer. She came home on a Saturday, but by the next weekend she was dead.” —fellow activist Betty Krawczyk
By Dianne Meili
Archives, 2012 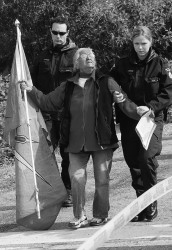 Years have passed since environmental activist Harriet Nahanee died, but her friend and fellow protester Betty Krawczyk, still gets e-mails sent to her praising the Elder’s courage.

In January 2007, Nahanee, 71, was sentenced by Judge Brenda J. Brown to two weeks in jail for criminal contempt of court for her part in the Sea-to-Sky Highway expansion protest at Eagleridge Bluffs near Vancouver.

Despite a written plea from Krawczyk, who was also arrested and served her 10-month sentence, that “Mrs. Nahanee is not well (and) has asthma and is suffering the after effects of a recent bout of flu that has left her very weak” the Elder was incarcerated in the Surrey Pretrial Centre.

“That facility is very cold,” explained Krawczyk, who is non-Native, in a telephone interview. “They keep the air conditioners cranked up and there’s not enough blankets.

“Harriet served nine of her 14-day (jail sentence) and then she caught pneumonia. When she was hospitalized, doctors discovered she also had lung cancer. She came home on a Saturday, but by the next weekend she was dead.”

Krawczyk, who bonded closely with Nahanee during the protest, said Nahanee had angered Judge Brown because she wanted to read the Royal Proclamation of 1763 in court. The decree defines Canada’s special relationship with Aboriginal people and sets out the basis in law for Aboriginal land ownership and other rights.

“The judge wouldn’t let her read it. She wouldn’t let me read it. When Harriet stood up with the document the judge got up from her desk and left the courtroom.”

Nahanee had refused to apologize to the court for her behaviour because she felt she had done nothing wrong in protesting the road development and this, along with the fact she was hard of hearing, exacerbated her relationship with the judge.

The night before Nahanee’s death on Feb. 24, 2007, about 100 people stood in a prayer vigil with candles outside St. Paul’s Hospital in Vancouver. They sang a “Women’s Warrior Song” to give her strength and verbally condemned the harsh and punitive jailing of the Elder for standing up for her Aboriginal rights. Having undergone a CAT scan that day, Nahanee was fragile, but told Krawczyk she insisted the fight for justice be carried on.

Krawczyk, originally from Louisiana, could understand Nahanee’s concern about the wetlands that were going to be bulldozed to make way for a highway in preparation for the 2010 Olympics. The new development would route Whistler-bound traffic around the bottleneck of vehicles waiting to access the ferry at Horseshoe Bay.

“As a grandmother like her, I related to Harriet right away,” Krawczyk said. “I hadn’t met her before the Eagleridge Bluffs protest, but I’d heard she pushed to get justice for First Nations women who’d been murdered or gone missing from Vancouver’s East Side.”

Nahanee had once hunted deer on the Eagleridge Bluffs with her first husband, and she felt the need to protect the wetlands for generations to come. She also told Krawczyk about the red-legged frogs who lived in the area and who stood to be wiped out by the disruption.

“When I asked her why especially the frogs, she said they only live in wetlands and they signify life because that is where we all came from – the wetlands. So the red-legged frogs also signify life to humans. In the Pacheedaht belief, when the last red-legged frog dies, all of humanity will also die.”

Nahanee, known as Tseybayotl, was born on Dec. 7, 1935. She was born as part of the Pacheedaht people, part of the Nuu-chah-nulth Nation of Vancouver Island, and was from the “Chief over all Chiefs” Queesto family. A holder of traditional knowledge, she married into the Squamish Nation “and was a pariah during the highway expansion protest because she was going against the Squamish band council,” said Krawczyk.

As a five-year-old, Nahanee was taken from her home in 1940 by the RCMP, placed on a gunboat and taken first to live at the residential school at Ahousaht and then the Alberni Indian Residential School.

“Their idea (in schooling us) was to civilize us and make us Christians and, actually, it was a process to take us away from the land,” she once said, noting her pristine childhood home had been clearcut-logged, mined and over-fished since she grew up there.

A 1995 Vancouver Sun newspaper article documents Nahanee’s statement about a murder she witnessed at the Alberni school. She was at the bottom of a set of stairs when she heard a female student crying and looking for her mother. The child was running up and down the stairs, and the school administrator chastised a supervisor at the top of them for letting her do so.

“I heard him kick her and she fell down the stairs. I went to look. Her eyes were open and she wasn’t moving. They didn’t even come down the stairs,” she is quoted as saying. Later, she was told by fellow students the body had been sent back to the child’s parents.

“It was for the children of the Squamish Reserve that Harriet did what she did on the Eagleridge Bluffs,” said Krawczak. “She is still influencing people today. I get e-mails from Mohawks in Montreal who say they are inspired by her courage,” she added, referring to readers who respond to her social justice writings.