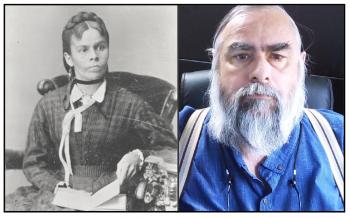 Nahnebahwequay, also known as Nahnee, has been designated a person of national historic significance, and Darin Wybenga, the Mississaugas of the Credit First Nation, who nominated Nahnee for the honour.

“Her many accomplishments are all the more remarkable given that she was an Indigenous woman who challenged colonial land policies as well as conceptions of women during her era.” — Minister Jonathan Wilkinson
By Sam Laskaris
Local Journalism Initiative Reporter
Windspeaker.com

A 19th century First Nations advocate is being recognized by the federal government more than 150 years after she died.

Nahnebahwequay, who was a member of the Mississaugas of the Credit First Nation located near Brantford, Ont., advocated against colonial policies that forced Indigenous people from their lands.

Nahnebahwequay, who was also known as Nahnee, even travelled to England in 1860 to plead her case over a land dispute to Queen Victoria, concerns that fell on deaf ears.

Though few Canadians are aware of Nahnebahwequay’s accomplishments, that is about to change soon.

That’s because on Wednesday, July 21, Jonathan Wilkinson, the minister of Environment and Climate Change, announced that Nahnebahwequay has been designated as a person of national historic significance.

“Nahnebahwequay was a lifelong champion of Indigenous land rights at a time when Indigenous peoples were forcibly removed and dispossessed from their lands,” Wilkinson said. “Her many accomplishments are all the more remarkable given that she was an Indigenous woman who challenged colonial land policies as well as conceptions of women during her era.”

“Nahnebahwequay means 'Upright Woman' in the Ojibwe language,” Wilkinson said. “On behalf of the Government of Canada, it is my honour to commemorate the national historic significance of this Mississauga advocate who so embodied her name and dignified her cause.”

Her designation comes via the National Program of Historical Commemoration.

Darin Wybenga, the Mississaugas of the Credit First Nation’s traditional knowledge and land use coordinator, nominated Nahnebahwequay for the prestigious accolade on behalf of his First Nation.

“It’s a very simple process,” Wybenga said of the nomination application he sent in. “You just write a letter to the Historic Sites and Monuments Board of Canada and they do the research for you. You just give them a name and they will do the research.”

Wybenga, a former teacher who retired five years ago and then started working for his First Nation, said he is a bit surprised Nahnebahwequay was not honoured previously.

“As far as I know, she was never nominated before,” he said. “If you Google her name there is a lot of information available about her. I guess people just didn’t see fit to nominate her before.”

Wybenga said he mailed off his nomination application before the COVID-19 pandemic started. But it was only a couple of weeks ago that he received a letter indicating that the federal government would indeed be giving Nahnebahwequay a national designation.

“I was elated,” Wybenga said. “And I thought this is just great.”

Wybenga explained why he felt it was necessary to nominate her.

“I was impressed by the dignity and the resolve of Nahnee as she worked to resolve her grievances and that of her people,” he said. “Largely unknown or forgotten by the people of our First Nation, she emerges from our past as an exemplary person. She teaches lessons about perseverance, resilience, and integrity as she confronts the government of the day; she challenges stereotypes regarding women and First Nations that people held in the past and that are existent to this day.”

The Historic Sites and Monuments Board of Canada was created in 1919. The board advises the Minister of Environment and Climate Change, who is also responsible for Parks Canada, regarding the designation of people, places and events of national historic significance.

Since the board’s inception slightly over a century ago, more than 2,200 designations have been made across the country.

Wybenga said a plaque will be created to recognize Nahnebahwequay’s achievement.

“We want to discuss with the board where it will go,” Wybenga said, adding he’d be in favour of the plaque being placed somewhere along the Credit River. “We want to get a place that is fitting.”

Wybenga believes deciding the ideal location for the spot and planning a ceremony to unveil it could take some time.

“I think it’s going to take at least a year,” he said. “That will give us a little bit of time to decide how to celebrate this.”

Wybenga also said he believes Nahnebahwequay certainly deserves the honour being bestowed upon her.

“In the history of our First Nation, she is the most prominent Indigenous female to come down to us from the past,” he said. “It is not until the late 20th century and the early 21st century that female leaders surface prominently in the governance of our First Nation.”

“Hopefully, the example of Nahnee and her commitment to justice will inspire others, from within our First Nation and elsewhere, to work on behalf of Indigenous rights.” Wybenga said.