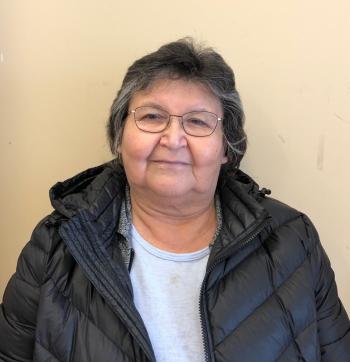 Celia will be greatly missed by everyone who knew her, as she was a “people’s Chief”.

The family announces with sorrow her sudden passing at Geraldton District Hospital on Saturday May 9, 2020 at the age of 67 years.

Celia was predeceased by: her late husband Gabriel Echum, her father Cornelius McKay, her sister Eva Ostaman, and her brother Marlon (“Roland”) McKay. Celia was also predeceased by her sister-in-law Alvina Echum-Abernot, and by her brother-in-law George Abernot. After the passing of George in 2005 and Alvina in 2011, Celia took on their children as her own: Cheryl Imbeault (Edmonton), George Echum (Longlac), Clarine Echum (Longlac), and Ron Echum (Thunder Bay), as well as their children (her grandchildren).

Celia will be sadly missed by not only her children, but also by her grandchildren, and her great-grandchildren. Celia also had numerous nieces and nephews, far too many to list here.

Celia will be greatly missed by everyone who knew her, as she was a “people’s Chief” just as her husband Gabriel was. She sacrificed her life for the betterment of the people and of the community that she served. She was an intelligent, strategic, and powerful leader for the Ginoogaming First Nation people. Like her husband Gabriel, as a Chief, Celia put the peoples’ needs ahead of her own personal needs. In taking care of everyone as best she could, Celia possessed a drive to assist others that is rare, that most of us do not have.

Celia was born in Kitchenuhmaykoosib Inninuwug First Nation (a.k.a. “Big Trout”), and as a child she attended the Cecilia Jeffrey Residential School in Kenora. She would tell stories of how she witnessed abuse that the other children were facing. In her later years, Celia spoke of running away from the residential school at times, so that she could endure the pain of punishment with her fellow students, so they would not have to face suffering alone.

Celia later arrived at Geraldton High School, 33 km west of Longlac, in the 1960’s in search of Ontario Secondary School educational attainment. It was during those years, at the age 14-15, when she met the love of her life: Gabriel Echum of Ginoogaming First Nation, who she would later marry in 1970 after she completed her secondary school studies. Gabriel would become Ginoogaming First Nation Chief in 1973, and this commenced their family’s political life of dedication to the Ginoogaming First Nation people, which would continue on for the following five decades.

After the birth of her first four sons in 1970-1975, Celia attended Laurentian University via distance education to attain her Community Health Representative (CHR) certification. She excelled at this role in her assistance to the Ginoogaming First Nation community members. She built strong relationships with the local people.

While living in Ginoogaming First Nation with her husband Gabriel and their five sons (Troy Echum born later on, in 1982), Celia cultivated very close relationships with local community Elders, and especially Gabriel’s father David Echum (“Omie”) who passed on in 2001 at the age of 91 and his wife Elizabeth Echum (“Zebate”) who passed on a few years before David. Celia had excellent family relationships with all Ginoogaming First Nation Elders, throughout all of her decades of leadership in the First Nation. She often assembled her Elders in meetings, to receive direction and guidance from them, and she always made sure that they enjoyed platforms from which to speak. Gabriel’s uncle Louis Dore (“Ogie”) is another Elder who assisted Celia’s family, as he lived with them in their family home and helped to take care of Celia and Gabriel’s children.

In addition to her grassroots role in the Ginoogaming First Nation community throughout the past several decades, Celia worked tirelessly to advance the needs not only of the Ginoogaming First Nation people, but all Indigenous peoples, through her networking and communications with various boards and associations. Her service was so vast that it is impossible to list here.

Just a few of her extraordinary contributions include her leadership and guidance on: the Assembly of First Nations (AFN) Women’s Council, the Anishnawbek Police Services (APS) Board of Directors, the Dilico Ojibway Child & Family Services Board of Directors, the Nishnawbe-Aski Legal Services Board of Directors, the Nishnawbe Aski Nation Chiefs political organization, the Chiefs of Ontario political territorial organization, and the Matawa First Nations Chiefs’ Council. She served as the KKETS (Kiikenomaga Kikenjigewen Employment & Training Services) co-founder (she also helped to come up with the name of that corporation which was launched in 2011). Celia worked tirelessly in her advocacy, as many can attest to across Ontario, and even across Canada.

Celia had a vested interest in utilizing economic development to advance the needs of her people. The recent Greenstone Gold Mine (GGM) Long Term Relationship Agreement Negotiations (which concluded with the LTRA signing in November 2019), and the 1993 Long Lake Forest Products Partnership Agreement Negotiation Team are two areas where her advisory capacity was instrumental. She was committed to economic, social, human, and community development for her people throughout her lifetime. Celia was a Minodahmun Development Corporation co-founder (a regional corporation to pursue business opportunities for the Greenstone Gold Mines LTRA, that she developed along with Chief Dorothy Towedo of Aroland First Nation, and Chief Theresa Nelson of Animbiigoo Zaagi’igaan Anishinaabek), a Ginoogam Development Corporation co-founder (a forest industry agreement to supply wood fibre to the Longlac Lumber Inc facility, signed in 2015 worked on in the following years with Chief Veronica Waboose of Long Lake #58 First Nation and Chief Dorothy Towedo of Aroland First Nation), and a Nee-daa-kii-Me-Naan Inc co-founder (a forest management corporation established in 2012 with six other area Chiefs). Celia was relentless in her desire to advance her peoples’ interests.

Notably, as a chief, Celia was the first leader in this region to advance Geraldton area gold mining development through a partnership agreement with Premier Gold Mines in 2009. As noted, she was passionate about First Nation people being self-sufficient through community economic development to service the needs of the people, but also advocated for environmental responsibility and stewardship. She was involved in negotiations for the “Ring of Fire” mining development with the Matawa First Nations Chiefs and leadership and Ontario through a Unity Declaration (2011) that led to the Matawa First Nations Regional Framework Agreement, in 2014-2019. Celia was also co-founder of the Minawshyn Development Corporation (a regional economic development vehicle for Matawa First Nations), as well as serving Ginoogaming First Nation as the Rocky Shore Development Corporation community representative (as shareholder) from 2015-2020.

Locally, Celia was involved in leading a team that established the 1995 Ginoogaming First Nation Gaming License and Ginoo-Gaming Activities, which created a charitable organization to help disadvantaged community members. She also helped to lobby for the construction of the Nimiki Migizi Secondary School (1999-2000) and was instrumental in leading the process to secure funding for a community-led Ginoogaming First Nation Economic Development Strategic Plan (2015).

One example of the leadership that Celia provided, that had great significance, was the curriculum development for the Aboriginal Workforce & Maintenance Development Program (AWDMP) which operated in Ginoogaming First Nation from 1996 to 2001, and then again in the 2000’s to the present. The programming broke barriers to employment for many First Nations people in this region, as the Long Lake Forest Products sawmill and planer operation at that time employed over 289 employees attending from dozens and dozens of First Nation communities.

Celia adopted new ways to engage the Ginoogaming membership by launching a newsletter during her first term (2007), entitled “Community First,” which was a vehicle she utilized as a Chief to reach many of her Ginoogaming First Nation members both on- and off-reserve. Celia succeeded in becoming elected as Chief from 2007 to the present day, being continually re-elected in seven victories each and every 2-year term, leading the community for a total of 13 consecutive years to the present. This has never before been accomplished in Ginoogaming First Nation history.

Celia and her husband Gabriel, both before his passing and after, enjoyed a close relationship with Ginoogaming First Nation community member Adolph Rasevych, whose wife Judy was a first cousin of Gabriel’s, who grew up with him on their traditional family lands use and trapline area in Arms (50 km southwest of Longlac, near Caramat). The three of them (Celia, Gabriel, and Adolph) were a trio known to many as leadership “dynasty,” who met constantly and regularly from 1993 onwards, to devise strategies which could advance the socio-economic position of Ginoogaming First Nation community towards prosperity. They did have a special and unique bond. The three serviced the immediate needs of the community people on a continuous basis with much success. One can imagine that the three are together now, leading a meeting of other passed Elders and leaders, in a Ginoogaming First Nation band meeting, watching the Ginoogaming First Nation developments from above.

Celia always pushed for traditional Anishnawbek spirituality and ceremonies such powwow, traditional hunting and fishing and gathering at Wiisnnewii Zaahgaygin Healing Camp outside the community. She was a spiritual person who also practiced Christian beliefs, and she accepted the different forms of spirituality as she saw them all unified in their commitment to being devout to a Creator, God, or Kitchi-Manitou.

Finally, Celia was inspired by the youth and the future generations. She constantly advocated for better education systems on-reserve, as well as post-secondary funding and wrap around supports. Many First Nation youth found her to be a treasured mentor, as she gave them the opportunities to step up and lead projects for the community. Celia believed in the younger generation, as well as the older generation.

Celia and her husband Gabriel were Ginoogaming First Nation Chiefs for 21 of the past 27 years (since 1993), working on improving governance and the financial stability and management systems for the First Nation. Celia represented “unity” of the people and working together with other First Nations towards common goals and objectives. She remained unfazed by political pressure, and was resilient in her work and moving many local and regional milestones that will live on for time to come. Words cannot capture the impact that she had on so many people with her genuine smile, priceless words, and comforting aura. She will be missed so very much, by so very many people.

Burial will take place in the Longlac Cemetary to follow, with only 6 pallbearers and 10 persons due to COVID-19 restrictions.

As a result of COVID-19 restrictions, obviously the hundreds of people who would be in attendance at a service for Celia cannot do so.

However, the Ginoogaming First Nation community will be holding a funeral procession which will start at Chief Echum’s home, immediately following the service on Wednesday. There will be a “Travel Song” traditional Anishnawbek drumming and singing, as the procession proceeds around the residential streets of Ginoogaming First Nation. All residents may stand on their front yards, and the procession will be shared on the Internet via Facebook Live.