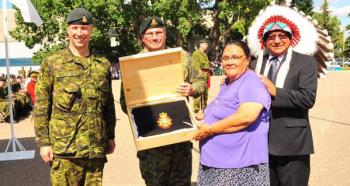 She was “taller than the Queen.”
By Dianne Meili
Originally published in 2012 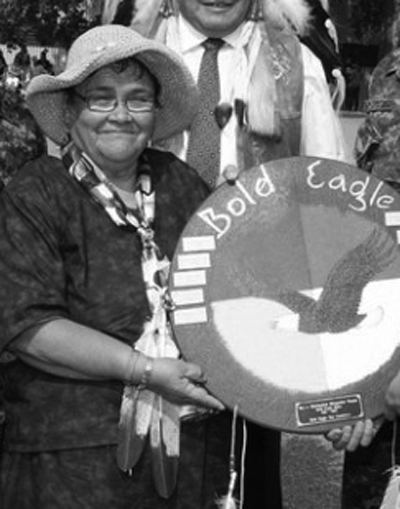 By late afternoon it might normally be difficult to engage 32 brains in a Grade 5 classroom, but while Alma Kytwayhat shared Indigenous ways of knowing with students, minds remained alert and the questions came fast and furiously.

The Saskatchewan Cree Elder served as a “kehtayak” (knowledgeable person) for the Greater Saskatoon Catholic School. She could easily fascinate her audience with discussions of plants and traditional healing remedies, the uses of the buffalo, and how she could predict the weather by observing the phases of the moon and the behaviors of different kinds of animals.

“As an Elder, she knew her stuff,” said Major Nolan Kemp. He worked with Alma in another of the many roles she assumed with various provincial and national institutions. She was kohkom (grandmother) for Bold Eagle, an Army Reserve Basic Military Qualification course of the Armed Forces.

As coordinator of the summer youth program, Kemp worked with Alma for three years.

“She helped mentor, develop and guide the program,” he said. Her involvement with Bold Eagle stretched back well before his time, and he recalled fondly that she liked to say she was the proud grandmother who provided inspiration and guidance to more than 1,000 participants over the years.

“I had a good opportunity to get to know her,” Kemp added. “She was like a member of my family.”

He described the easy rapport Alma established with recruits during the first week of traditional culture camp. Her words of encouragement and inspiration served to build a strong sense of teamwork early on in the program, “and that carried many youth through the five weeks of basic training that followed.

“She had a way with young people that endeared them to her,” Kemp observed. She spoke about traditional customs, spirituality, and was involved in the weekly sweatlodge ceremonies offered to recruits. Also available to them in individualized “Elder hours”, she listened to their personal issues and concerns and motivated them through the challenges they faced.

“She was definitely ‘the rock’ of the program,” Kemp said. She initially joined as Elder-in-Residence with her husband Simon, who passed away in 2008, but kept on with the program until last year.

There, she started her family, initiated the daycare facility and worked as a Community Health Representative.

Over the years, Alma conducted workshops in traditional cultural practices, focusing on women’s health and healing. As she learned more about spirituality from attending ceremonies and learning from other teachers, her reputation as a “knowledge keeper” grew.

Her work with the Office of the Treaty Commissioner’s Speaker’s Bureau was especially important to her, as she endeavored to “help teach more than 7,000 Saskatchewan schoolteachers about the history and meaning of Treaty,” said Federation of Saskatchewan Indian Nations (FSIN) Vice Chief Morley Watson.

“She also did so much work with non-First Nation people, teaching them about Cree language, culture and traditions,” he added.

Alma helped deliver comprehensive mandatory Treaty education programming in the classroom, and was interviewed during the compilation of information sheets about the role of First Nations women in Treaty negotiations.

“It was just as much the women’s responsibility to be involved in the Treaty negotiations as were the men,” she said. She explained that once the First Nations men and women made their decisions and negotiations took place, the women attended and “they sat where the chiefs and councilors sat to give them support and encouragement.”

Even though the women may not have spoken directly to the negotiators, they were still valued for the strength they provided the leaders by their presence. The older women, in particular, were there to “make the negotiations stronger, to give strength, encouragement, compassion and kindness to the men,” she added.

“As a result of the power and sacredness that a woman holds, it is only natural to realize that women were just as involved in Treaty negotiations as the leaders.”

Alma’s family wrote in her funeral notice that she loved to laugh and joked that she was “taller than the Queen.” She traveled nationally and internationally, but loved her role as a mother and grandmother. She enjoyed being out in nature and every late summer and fall she could be found gathering herbs and filling her berry basket.

Over the years, Alma received the Lifetime Achievement Award, Women of the Dawn First Nation Award, Citizen of the Year – Indian Government Category, FSIN Circle of Honour, and is listed on the Honour Wall of the Smithsonian National Museum of the American Indian in Washington, DC.

She was also the recipient of the Canada 125 Commemorative Medal and the Saskatchewan Centennial Medal.