With a world in crisis, Native sniper trained for D-Day invasion 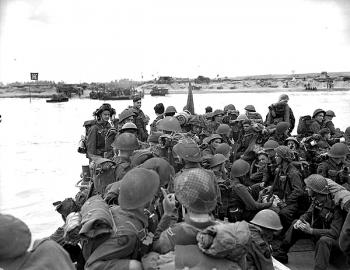 "A lot of us were hit in the landing craft—direct hits. I was on the first wave. My rifle was waterproof, the scope and everything. I took it out and went to work. You had to be scared, facing death. I don't think anybody can say that they weren't scared."
As told to Bruce Sinclair from our files (1993)

Joseph McGillivary enlisted in the army in 1942 at the age of 18. From The Pas, Man., he was sent to Winnipeg for training until April 1942 when he went overseas to Sussex, England for two more years of advanced training.

When he joined the army in Winnipeg, he was originally with a regiment of the Princess Pat Canadian light infantry. But when he arrived in England he was transferred to the Royal Winnipeg Rifles and began training as a sniper.

"On the firing range I was always a good shot. As an Indian I was qualified because I was a good shot already...not only shooting, map-reading, how to communicate, night marches.

"They'd have us blind-folded at times, take us out at night to try and find our way back in the morning. Sometimes there was a night march, too. You had to go by the stars, but I was well qualified for that because the old people were never lost in the bush. They taught me quite a bit about that."

McGillivary was being readied for an important event: The invasion of Normandy, D-Day, June 6, 1944. While training as a sniper, he was with a group of four white men and four Indians. He remembers the voyage from Portsmouth, England as very rough and choppy, until the time came for all hell to break loose.

"A lot of us were hit in the landing craft—direct hits. I was on the first wave. My rifle was waterproof, the scope and everything. I took it out and went to work. You had to be scared, facing death. I don't think anybody can say that they weren't scared."

Thousands died on the beaches of Normandy that day. Juno Beach was the code name for the landing place of McGillivary's regiment. He remembers his buddies drowning at the landing site because they were too short to carry the 112 kilograms of gear while in the water.

When D-Day was over, only the Indian snipers were left from the original eight in the Battalion.

McGillivary didn't sleep for nine nights after landing at Normandy. There was just no relief. He finally collapsed in his foxhole. When he woke up, he kept fighting until he was wounded.

"I was in the front and we were passing through the Polish armored division lines, giving them infantry support. They were stopped there on this ridge and the artillery was quite busy on the other end. That's when I got hit.

"I got facial wounds, some in the arm, shrapnel. At the same time, behind our lines the American Air Force was bombing on our lines. There was a lot of wounded, some killed by that bombing. They (Americans) had surrounded the German 6th Army there and thought that they were bombing the Germans."

McGillivary was sent to a hospital in Bayeux, France, where he stayed for a month before rejoining his battalion at the front in Belgium and Holland. From 1,200 men in the battalion, there were now 300.

While on patrol in Holland, he encountered the enemy again. This time it was eye-to-eye. He single-handedly captured Major-General Kurt Meyers, Commander of the 12th SS Division of the German army. Meyers was responsible for many of the Canadian casualties at Normandy and was the subject of a massive manhunt

"We were on patrol, house-cleaning, and he was sitting there. I recognized him right away from his pictures because we were hunting him. I told him, I said ‘let's go'. He shook his head and said, 'Nein, nein'. He didn't want to get captured by an Indian. I guess that was the point. My bayonet was fixed and I said, 'C'mon' and jabbed him a little bit and he came. He was one of the toughest they had in the 12th SS."

Kurt Meyers was taken to Canada and sentenced to 21 years at the Kingston Penitentiary in Ontario. He was later released and died in Germany at age 56. McGillvary was never recognized in any official way for the capture of the SS officer.

The Second World War ended for McGillivary at Aurich, Germany. He was back at home in Cumberland House, Sask. when the atomic bomb fell in Japan on Aug. 8, 1945. Later he served in the Korean War from 1950 until 1952.

When he returned home to Saskatchewan he discovered he had been struck from the list of Treaty Indians, formerly the Pine Bluff Band. According to the policy of Indian Affairs, any Indian that left the reserve for more than two years lost their status. He later regained his Indian Status with the passing of Bill C-31.

Today, McGillivary is back in the bush tending his trapline and using the same stars to guide him through the forest that he looked at while night-marching as a sniper in a strange and unknown land.

McGillivary retired at 71 after losing his wife Mary Jane in 1990. He talks of his war experiences with pride, just as he wears his 11 medals with pride.

He kept in touch with a friend he met during wartime in Nijmegen, Holland in the winter of 1944, but as time passed, those letters stopped coming.

"I'm very grateful to tell my story; it was a very good experience to serve in the army for two years," McGillivary said. "We have quite a few veterans here in Cumberland House but I'm the only one to serve twice."