Tom Longboat: Athlete whose travels were far and fast 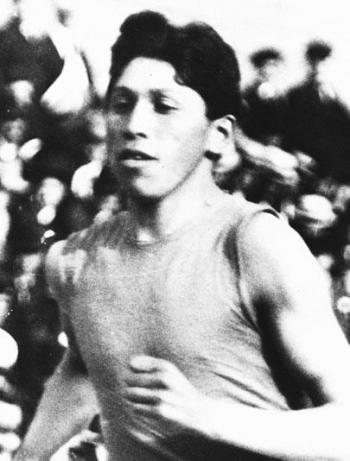 In 1998, as one century was about to end and another begin, Maclean's magazine ran a list of the 100 most important Canadians in history, dividing them into 10 categories, with 10 names in each category. In the Stars category, reserved for the best in what the country had had to offer, the number one spot went to Tom Longboat.

And in the list of the top 10 Canadians in history overall, Longboat came in ninth spot, sharing the list with the likes of William Lyon Mackenzie King, Glenn Gould, Nellie McClung and K.C. Irving.

But just who was Tom Longboat, and why did Maclean's deem him to be such an important person in the history of our country?

Thomas Charles Longboat was born on the Six Nations reserve on June 4, 1887, a member of the Onondaga Nation. His Iroquois name was Cogwagee, which means Everything.

The family lived on a small farm, and everyone had to help with the plowing, harvesting and caring for the animals. When his father died when Longboat was only five, the children had to pitch in even more to help their mother.

While chores kept him busy growing up, Longboat always found time for fun, sometimes sneaking away from his work to play lacrosse. He was a good lacrosse player, partly because of his speed. That speed also came in handy when his mother would send his older brother out to find him and bring him back home, and the two would spend hours chasing each other all over the reserve and into the neighboring countryside.

In the spring of 1905, 17-year-old Tom Longboat entered his first competitive race, the annual Victoria Day five-mile race in Caledonia. He didn't win the race, coming in second, but the experience had whetted his appetite and he decided to begin training to improve his strength and endurance.

Part of his training involved running to neighboring towns, but members of his family wouldn't believe him when he told them how far and fast his travels had taken him. That was until Longboat beat his brother to Hamilton, with Longboat on foot and the brother driving a horse and buggy and getting a half-hour head start.

The training regimen paid off for Longboat when the Victoria Day race came back around. From the very beginning he took the lead and maintained it through all five miles, finishing more than 400 yards ahead of the nearest competitor.

Longboat's next race would be the Hamilton Herald Around the Bay race along a 19-mile course. When he lined up at the starting line with the 26 other competitors, no one there had ever heard of him, and he was given 100 to 1 odds at winning by those taking bets on the race's outcome. But by the time the race was over, everyone had taken note of the newcomer, who finished the route in just over one hour, 49 minutes, almost three minutes ahead of the second place finisher.

The results were the same in Longboat's next two races, the 15-mile Ward Marathon in Toronto, and a 10-mile race on Christmas Day in Hamilton.

In 1907, Longboat set his sites on an event that was, and still remains, the premiere running event of the world—the Boston Marathon. Longboat was one of seven Canadians entered in the race, with 104 runners in total competing. He won the race handily in a record time of 2.24:24, beating the previous record by five minutes.

With the Boston Marathon under his belt, Longboat's next big challenge would be the Olympic Games, to be held in London, England the following year. Leading up to the Olympics, he recorded win after win after win, beating a relay team in a five-mile race, winning the Ward Marathon again, and setting a new Canadian three-mile record of 15:09.6.

The day of the Olympic race was hot, and the runners faced a route longer than many of them had ever run before—26.2 miles—lengthened so the royal family could watch the start of the race from Windsor castle. Longboat was running in second place when, nearing the 20-mile mark he collapsed and had to leave the race. The route took a similar toll on many of the other participants, with fewer than half finishing, and many of those finishing having to be carried off in stretchers.

Following his experience in London, Longboat ran in two lackluster races back at home in Ontario, and some began to talk as if his running career was over. But it didn't take long for Longboat to convince them otherwise. He finished off the year by setting a new national record, and claiming his third consecutive Ward Marathon win, finishing eight minutes ahead of the second place runner.

Then, on Dec. 15, he left his amateur career behind and turned pro.

His first professional race was against Dorando Pietri, an Italian runner who had crossed the finish line first in the Olympic marathon, but who hadn't won a medal because officials had helped him across. Pietri had already won a rematch against the Olympic gold winner John Hayes, and Longboat had been invited to challenge the winner.

The race took place in New York's Madison Square Garden and, despite the fact that Longboat was unaccustomed to running on an indoor track, he won the race when, with just six laps to go, Pietri collapsed and had to be removed from the track on a stretcher. A few weeks later the two runners met in a rematch in Buffalo, and although this time Pietri left the track under his own steam, the end result was the same.

Longboat's next race would be Jan. 26 in Madison Square Garden, a match up against Alfie Shrubb, an English runner who as an amateur had dominated that country's running events. The lead up to the race became a media circus, with daily accounts of the runners' preparations for the big day.

The first half of the race belonged to Shrubb, who at one point was eight laps ahead of Longboat. Then, about 15 miles into the race, Longboat began to pick up speed. Twenty miles in, he'd reduced the lead to six laps. At the 23-mile mark, Shrubb's lead was down to two laps.

Longboat made up the difference at the 24-mile mark and as he passed his competitor, Shrubb walked off the track, leaving Longboat to finish alone to earn the title Professional Champion of the World.

When war was declared in August 1914, Longboat joined up. He continued to run, both in competitions and exhibition matches set up for the forces, and in his role as a dispatch runner, taking messages between posts when communications were down.

When he returned home after the war, things had changed. Professional racing was no longer the draw it once had been and, although he still competed in a few races, Longboat soon had to turn his attentions to making a living through other means.

An elementary school in Toronto bears his name. His name and image grace a limited edition stamp issued by Canada Post to honor famous Canadians of the past century. And each year, the Tom Longboat Awards are given out to the top Aboriginal amateur athletes in the country, showing that almost 100 years after he ran his first race, the name of Tom Longboat continues to inspire.