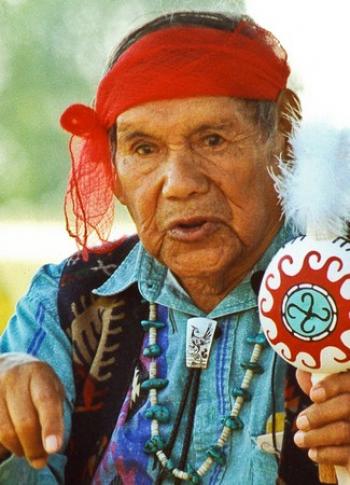 If people ignore the spirituality that surrounds everything, which helps them correct themselves when they err towards each other, and if they use inventions destructively, then nature will turn against them with extreme weather, volcanoes and big winds.

Originally fleeing to the desolate, rocky mesas of northern Arizona to live peacefully, the Hopi Nation, to which the late Thomas Banyacya belonged, was inscrutable and still, for the most part, wholly faithful to its religious traditions.

But, with the approach of 2012, a year some prophecy observers said would bring with it a transition, possibly even the "end time," the Hopi were in the global spotlight. It was a familiar place, occupied by the Hopi in the 1980s at the dawn of the spiritual new age.

Many seekers were ready to listen to Banyacya after the Harmonic Convergence in 1987, which correlated with the Mayan Calendar, signalling a global awakening to love and unity. It was expected "sacred information" and guidance would flow through Banyacya about the state of earth and the necessity of transformation if mankind was to survive.

Banyacya had always held knowledge, which at first was shared limitedly through oral communication until 1948. That’s when his Elders saw pictures of mushroom clouds made by atomic bombs. The image reminded them so much of the "gourd of ashes" foretold in their prophecies that they decided to reach out to the outside world.

Banyacya was named one of the last four messengers by Hopi Elders to warn the world of impending doom. According to a 900-year-old religious tradition, the Great Spirit Maasau'u, Guardian of the Earth, assigned the Hopi the duty of preserving the natural balance of the world. The deity also entrusted the Hopi with a series of ominous prophecies warning of specific threats and providing guidance on how to avoid them.

Banyacya was an obvious choice to become a Hopi spokesperson because his allegiance to his culture surfaced early. As a youth he was sent to the Sherman Indian School in Riverside, Calif., where he became angry at having to use the English name of Jenkins. Even though his father accepted the name, Banyacya later insisted on using his Hopi name.

When he attended college in Oklahoma, he helped establish the first Indian lodge where students could sing and perform traditional ceremonies.

While many Hopi were accepting the ways of the white man, Banyacya tried to remain true to ancient values. He spent seven years in jail rather than fight in the Second World War because, as he so often explained, the word "Hopi" means "peaceful" or "virtuous" ones.

For almost 50 years he warned that an endless striving for material wealth would destroy the balance of the world. He accepted some modern conveniences, but he spoke out strongly against uranium mining and other industries that harmed the earth.

Banyacya was likely the only Hopi to reach celebrity status, a stark contrast to his mostly reserved and secretive nation. He travelled widely to deliver his spiritual message to save the planet from greed and materialism, even attending several foreign conferences. No small feat since he refused to obtain an American passport. He is credited with reviving interest among American Indians in their Native cultures.

In accordance with the prophecies, which foretold a Hopi would take the message of peace "to the Great House of Mica on the Eastern shore where the nations come together to solve world problems without war," Banyacya focused on gaining an audience at the United Nations.

Three times he was refused the chance to speak, but he persevered because the Elders told him he would have to "knock on the door four times." Finally, on his fourth attempt, in 1992, he made a brief speech in the General Assembly hall on a day when most delegates were away on recess.

Still, he sprinkled sacred cornmeal on the podium and delivered his message of simple living in accordance with nature.

Banyacya was an incredibly well-intentioned and dedicated messenger. He encouraged nations to come together in harmony, prayer and meditation to clean up the mess; only then, would mankind resist bringing a third world war upon itself.

If people ignore the spirituality that surrounds everything, which helps them correct themselves when they err towards each other, and if they use inventions destructively, then nature will turn against them with extreme weather, volcanoes and big winds, he claimed.

Though Banyacya, who passed away at 89 in 1999, may have failed to bring about the change in people he had hoped for during his lifetime, today his message seems more poignant than ever.