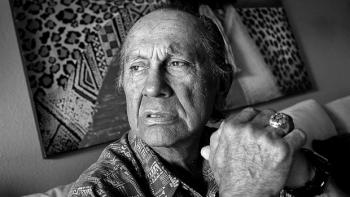 Russell Means met Dennis Banks, who was developing the American Indian Movement. By 1970, Means became the movement’s national director, and over the next decade, according to the New York Times, his deeds would make him America’s best known Indian since Sitting Bull and Crazy Horse.

Braving the damp cold of a late autumn rainstorm, Winnipeg’s Harrison Friesen was one of many across North America who held vigil for AIM activist Russell Means after he passed away on Oct. 21, 2012.

“I was proud of everyone who came out to show respect for a great leader and warrior of our time,” Friesen said in a telephone interview after the ceremony. “It was pelting rain but we kept a good fire going, and we helped send off his spirit with honour songs and dances.

“He inspires us and reminds us of who we are. I hope we can carry on with what he started.”

Friesen, who leads a Native rights movement in Canada and is a trainer in non-violent, direct action activism, recalled seeing Means – best known for his early leadership of the American Indian Movement – on television during the Oka Crisis in 1991.

“Just hearing his words gave me strength. He definitely was an early influence in my life,” said Friesen, who recalls Means said what needed to be said, and wasn’t afraid to do so.

“I look up to all those guys – other AIM members like John Trudell and Leonard Peltier, too. In fact, when I was a youth, it was an AIM member who took me into ceremony and gave me my first eagle feather.”

As the leader of AIM, Means led its 1973 armed occupation of the South Dakota town of Wounded Knee. It was the site of the 1890 massacre of some 350 Lakota in the last major conflict of the American Indian wars.

In what became a 71-day siege that involved gun battles with federal officers and the deaths of two FBI agents, Means, his fellow AIM leader Dennis Banks (who passed away from cancer on Oct. 29, 2017) and others demanded government recognition of historic treaties and protested corrupt tribal governance.

Means first gained national attention in 1970 when he directed protestors to seize the Mayflower II ship replica at Plymouth, Mass. on Thanksgiving Day. According to the New York Times, the confrontation between Indians and costumed “pilgrims” attracted network television coverage and made Means an overnight hero to dissident Native Americans and sympathetic whites.

Later, he organized a prayer vigil on top of Mount Rushmore in South Dakota, above the huge sculpted heads of past American presidents, to dramatize Lakota claims to their homeland in the Black Hills

With his long braids and rugged good looks, Means cultivated a militant warrior image. He, and other AIM members, presented tough exteriors; necessary due to the “dark violence of police brutality and voiceless despair of Indian people” that the movement grew out of, claimed AIM member Birgil Kills Straight in a poem he wrote in 1973.

Means and other AIM members were often violent, and became linked to the 1975 killing of fellow AIM member Annie Mae Aquash.

Authorities believe three AIM members shot and killed her on the Pine Ridge Reservation on the orders of someone in AIM’s leadership. They believed she was an FBI informant. Two activists—Arlo Looking Cloud and John Graham—were both eventually convicted of murder. The third has never been charged.

Means was born on the Pine Ridge reservation on Nov. 10, 1939. He was the oldest of four boys and moved with his family to the San Francisco Bay area when he was three. His father, Harold Feather Means, worked in wartime shipyards as a welder and auto mechanic.

In public school the young Means was taunted for being Native American and earned poor grades, but managed to graduate in 1958. He enrolled in four different colleges, fought alcoholism, and worked as a printer, janitor and even a dance instructor before taking a job in 1969 with the Rosebud Sioux tribal council in South Dakota.

Months later he became the founding director of an urban Native American centre in Cleveland and met Dennis Banks, who was developing the American Indian Movement. By 1970, Means was the movement’s national director, and over the next decade, according to the New York Times, his deeds would make him America’s best known Indian since Sitting Bull and Crazy Horse.

Aside from conflict hounding him as AIM front man, Means also fought personal legal battles. In 1976 he was acquitted in a jury trial in Rapid City, South Dakota, of abetting a barroom murder. Wanted on six warrants in two states, he was convicted of involvement in a 1974 riot during a clash between police and Aboriginal activists outside a Sioux Falls, South Dakota courthouse. He served a year in prison, where another inmate stabbed him.

He also survived three gunshot wounds: one in the abdomen fired during a scuffle with an Indian Affairs police officer, one that grazed his forehead shot by a would-be assassin, and another to the chest fired during another attempt on his life.

In 1987, Means ran for the nomination to run for president. He sought the Libertarian Party nomination but lost his bid. In 2002 he ran for the governorship of New Mexico, but was barred procedurally from the ballot.

Ever the showman, Means began an acting career after retiring from AIM in 1988. He played Chingachgook opposite Daniel Day Lewis in “The Last of the Mohicans” in 1992. Over the next 20 years he appeared in more than 30 films and television productions, including voicing Chief Powhatan in the 1995 animated film “Pocahontas”.

In his autobiography “Where White Men Fear to Tread”, Means admitted to his frailties and evils, but also acknowledged his successes. When AIM was founded there was no pride and self-dignity amongst his people, he said, but now “there is activism in virtually every American Indian community and there is Native American curriculum in schools.”

Means was 72 when he died of esophageal cancer. It had spread to his tongue, lymph nodes and lungs and doctors told him in the summer of 2011 that it was inoperable. He had already resolved to shun mainstream medical treatments in favour of herbal and other traditional medicines.

He had nine children and adopted many others following Lakota tradition.