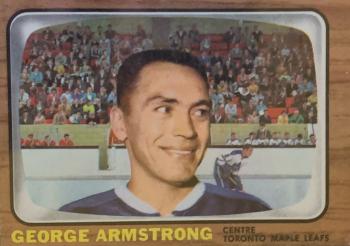 "A proud yet humble man, he loved being a Maple Leaf but never sought the spotlight even though no player played more games for Toronto or captained the team longer.” —Toronto Maple Leafs President Brendan Shanahan.
By Adam Laskaris
Local Journalism Initiative Reporter
Windspeaker.com

Reggie Leach’s NHL career didn’t get much of an overlap with George Armstrong’s, the long-time Toronto Maple Leafs captain. Leach played just one season against him in his rookie year of 1970-71 as a member of the Boston Bruins. But the future hockey legend looked up to the then 40-year-old Armstrong.

Armstrong passed away from heart complications this past Sunday at the age of 90. Born to an Ojibway mother and an Irish-Canadian father in Skead, Ont. in 1930, Armstrong was the first Indigenous NHL player to score in the NHL.

Leach, originally from Berens River First Nation near Riverton, Man., carried the torch as one of the NHL’s most notable Indigenous players for his 13 NHL seasons. Drafted 3rd overall by Boston after a very successful career with the Flin Flon Bombers, Leach currently holds the record for the most career NHL goals scored from a player born in Manitoba.

“I was always aware of who George was," Leach said on his early days. "He was one of our First Nations heroes.”

“George led the way for all of us. He was very well respected. It’s a great honour to just have him among us.”

Armstrong won four Stanley Cups as Toronto’s captain, served over 12 years, including their most recent victory in 1967. When Armstrong’s retirement finally occurred in 1971, he was the second-longest serving captain in NHL history after Boston’s Dit Clapper.

He played the entirety of his career in a Leafs’ uniform, a rarity in any era for a franchise with a history of burning bridges with their captains—Darryl Sittler, Mats Sundin, and Dave Keon all notable examples of leaders with less-than-private spats with the organization. Armstrong made seven all-star teams as a centre with Toronto, picking up 788 points in 1,188 games.

“He must’ve been a great leader if he was captain that long,” Leach said. “I think it’s a great honour.”

Leach says he didn’t always have the longest conversations with the naturally quiet Armstrong. However, he was grateful for the chats they did have, particularly in relation to Leach’s eventual sobriety after battling alcohol abuse during and following his career.

“He was always really proud of how I turned my life around and continued to help out youth hockey,” Leach said. The pair continued to chat whenever they’d run into each other around arenas, with Armstrong continuing his post-hockey career as a scout and Leach working in a variety of coaching and mentorship roles across Canada’s Indigenous communities.

In addition to his many accomplishments on the ice, which includes winning the 1975 Stanley Cup with the Philadelphia Flyers and the Conn Smythe Trophy for most valuable player in the ’76 playoffs, Leach is also a recipient of both the Order of Manitoba and Order of Canada.

But, he’s yet to find himself enshrined in the Hockey Hall of Fame as Armstrong was in 1975, though Leach remains in discussions for the honour each year.

While Leach spent his whole career in a vastly expanding NHL, the majority of Armstrong’s career was spent in the Original Six era with just a half-dozen NHL teams. Leach compared this year’s NHL regular season—a 56-game, divisional-only setup against six or seven other opponents—as the closest thing modern players will get to the NHL Armstrong played and thrived in.

Prior to their game Tuesday against the Calgary Flames —the first since Armstrong’s passing on Jan. 24—the Leafs honoured their former captain with a fitting tribute video, as well as with a jersey patch.

The Leafs’ online tribute to Armstrong says “George first signed with the organization in 1946 and was a member of the Maple Leafs family for 75 years. He distinguished himself as a player, captain, coach, assistant general manager, scout, community ambassador and alumnus.”

Skating his entire 21-year NHL career with the Maple Leafs, he was named one of the One Hundred Greatest Maple Leafs of all-time, had his number retired by the club, and is a member of Legends Row.

"A proud yet humble man, he loved being a Maple Leaf but never sought the spotlight even though no player played more games for Toronto or captained the team longer,” said Leafs President Brendan Shanahan.

After the passing of Armstrong, and Fred Sasakamoose and Jim Neilson both in November 2020, Leach has realized the reality of his unique life. There’s not too many older Indigenous players still alive today.

“I think [George’s passing] makes me the oldest,” Leach said.