Joseph Brant: History portrays Brant as both hero and villain 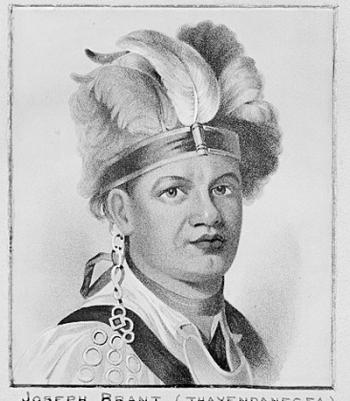 There is no shortage of memorials and tributes to the life of Joseph Brant. The Ontario city of Brantford and county of Brant bear his name.

Tyendinaga Mohawk Territory, located just east of Belleville, Ont., takes its name from Brant’s Mohawk name, Thayendaneagea, as does the nearby Township of Tyendinaga.

In Brantford, a monument featuring a large statue of Brant stands in Victoria Park. Brant is one of the inductees in Brantford’s Walk of Fame. A public school in the city also bears his name, as does a hospital in Burlington.

In 2006, a likeness of Brant was unveiled as part of The Valiants Memorial, a monument to 14 valiant men and women who had served Canada during war over the last four centuries. And the Royal Canadian Mint issued a silver dollar coin stamped with Brant’s likeness. But while to many Brant is seen as a heroic figure, others hold a less flattering opinion of the man.

Thayendaneagea was born in 1742 in what is now Ohio. His parents were Mohawk, and their home was Canajoharie, located in the Mohawk Valley in what today is New York State, but they often travelled into the territory of the Wyandot people to hunt, and that is where their son was born.

Translated into English, Thayendaneagea means “Two sticks bound together for strength.” There was nothing particularly auspicious about his birth, but soon circumstances would arise that would open doors for this future leader and change the course of his life.

Thayendaneagea was still only a boy when his father died. When his mother Margaret remarried, it was to another Mohawk man, Brant Canagaraduncka. Her children, Thayendaneagea and his sister, Konwatsiatsiaienni, took on the name of their stepfather, and became known as Joseph and Molly Brant.

Their new stepfather was a respected leader among the Mohawk people, but he also had influential friends among the British. Chief among them was William Johnson, who would serve as British superintendent of Indian Affairs from 1755 to 1774. When Molly moved into Johnson’s home and became his wife, Brant came along too, as Johnson took the boy under his wing.

It was under Johnson’s tutelage that Brant had his first experience with war. At the age of 13, he fought in the Seven Years War, which saw British forces defeat the French in a battle for control of North America. For Brant, it would be a taste of things still to come.

When he was 18, he was sent off to get an education at Moor’s Indian Charity school in Connecticut, where he learned to read and write English and studied western literature and history. By the time he returned from school, tensions had begun to mount between American settlers and the British.

Angered by the high taxes being demanded of them by the Crown, the American colonies were determined to fight to gain their independence. As the fighting began, Brant travelled to England to gain assurances from King George III that England would step in and address the problem of American colonists moving onto Native lands if the Native people chose to side with England in the battle.

When he returned to North America, he met with the leadership of the Six Nations—the Mohawk, Cayuga, Seneca, Oneida, Tuscarora and Onondaga—urging them to take up arms and fight alongside the British forces, saying a British victory would be the only way to protect their lands from further American encroachment.

In the end, the Mohawk and Cayuga agreed to fight for England, while the Oneida and Tuscarora chose to side with the American colonists. Some Onondaga and Seneca chose to fight for England, some for the colonies. The inability of the Six Nations to agree on a unified course of action brought an end to the Great Peace, a sacred pledge that had been in place for hundreds of years that the Six Nations of the Iroquois Confederacy would not go to battle against each other.

Many place the blame for the death of the Great Peace squarely on the shoulders of  Brant.

Brant was made a captain in the British army, and was appointed as a Six Nations war chief by the Crown. He fought in many battles, including the infamous Cherry Valley Massacre battle in eastern New York on Nov. 11, 1778  during which more than 30 civilians, including women and children, were killed.

In retaliation for Cherry Valley and other similar incidents, the American forces launched a campaign aimed at crushing the loyalist forces and the Iroquois nations that had sided with the British. The Americans won a decisive victory at Newtown in August of 1779, then sealed the fate of the four Native nations, destroying dozens of Iroquois villages throughout their traditional territory.

The Native forces continued to fight, even though they’d already been forced to abandon the lands they’d been fighting for.

In the end, the American colonists won the war, and their independence. But when it came time to sign the peace treaty officially ending the hostilities, neither the Americans or the British made any provisions for the Six Nations people, whose lands were ceded to the newly-formed United States of America.

When it became clear that the Six Nations would receive no compensation through the treaty, Sir Frederick Haldimand, the governor of Quebec, was anxious to find some way to placate the former British allies to prevent them from turning against the Crown.

On Oct. 25, 1784, Haldimand officially handed over a strip of land bordering the Grand River in what is now Ontario, transferring it to the possession of the Mohawk nation and whichever other of the Six Nations chose to settle on the land.

Soon problems with the land grant began to arise when Brant decided he could help raise funds to support the Six Nations by selling or leasing portions of Grand River lands.

While the government of the day frowned upon Brant’s parceling up and selling off of the lands, it continued to ratify his land deals for more than a decade before taking action. In the end, a system was set up whereby lands sold or leased by Brant would be surrendered to the Crown, which would then grant them to the party who had bought or leased the land from Brant.

By the time the last portion of land was surrendered to the Crown in 1841, only a small portion of land remained for the Six Nations people to live upon. Some of the land had been sold to make way for the town of Brantford. Some was taken by the Crown. Much of the money the Six Nations were to receive through land sales and leases failed to reach its people, with allegations surfacing that the funds were misappropriated by the Crown and her representatives.

Today, more than 200 years after the original Grand River land was granted to Brant and his followers, the people of Six Nations are still trying to determine exactly how their lands were squandered and where the profits Brant had envisioned ended up.

Brant died on Nov. 24, 1807 in his home on the shores of Lake Ontario, a site which is now home to the Joseph Brant Museum in Burlington.

History paints several different portraits of Joseph Brant. Was he an impressive leader who dedicated his life to the betterment of his people? Was he a man in quest of power and prestige whose lapses in judgment brought hardship upon the members of the Iroquois Confederacy? Or was he both?

However you chose to view him, there is one fact that cannot be denied—the choices made by Thayendaneagea reverberated throughout the Six Nations, and the echoes are still being felt today.