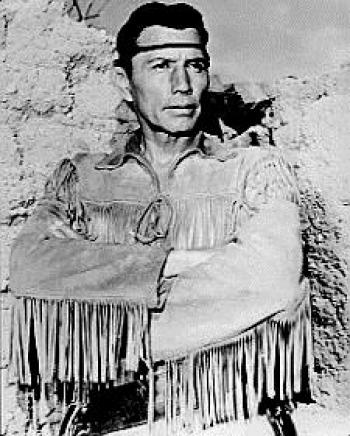 He was born Harold Jay Smith and later changed his name to Jay Silverheels, but to many he will always be remembered as Tonto.

Silverheels was born May 26, 1912 on the Six Nations reserve in Ohsweken, Ont. The Lone Ranger, which told the tale of a mysterious masked man and his faithful Indian companion as they fought to bring peace and justice to the Old West, was a highly successful radio program in the 1930s, '40s and '50s.

When the story made the move to television in 1949, Silverheels was cast as Tonto, the Commanche sidekick of the title character.

Silverheels' character was little more than a cultural stereotype, with Tonto speaking broken English and always subservient to the Lone Ranger. But as the first Native American actor to play a Native American on television, he broke new ground for Native actors, something he would dedicate much time and effort to throughout the rest of his life.

Silverheels played Tonto for the entire run of the television series, from 1949 to 1957. He also appeared in two Lone Ranger movies, The Lone Ranger, released in 1956, and The Lone Ranger and the Lost City of Gold in 1958.

While Silverheels is best known for his portrayal of the masked man's loyal companion, it is far from being his only role. He appeared on a variety of television shows, including a number of westerns—Wanted: Dead or Alive, Rawhide, Wagon Train, Daniel Boon and The Virginian among them—but he also appeared on Cannon, Love, American Style and even the Brady Bunch.

He acted in a number of movies as well, appearing alongside many of the day's greatest Western stars—

It was his appearance in a movie starring two other movie greats that first garnered him some attention. In 1948 he appeared as Tom Osceola in Key Largo, starring Humphrey Bogart and Lauren Bacall.

Silverheels, an accomplished boxer, wrestler and lacrosse player, capitalized on this athletic prowess to break into the movie business, starting as a stuntman and extra.

That athleticism is what opened the doors to the entertainment industry for Silverheels. A member of the Canadian National Lacrosse Team, he arrived in Los Angeles in 1938 while on tour with the team. Comedic actor Joe E. Brown spotted this tall, handsome athletic young man and urged him to try his hand at acting.

He had just begun to get a few jobs in films when the Second World War broke out. He served in the war; then returned to Hollywood. His first real film role came in 1940, playing an Indian scout in the Errol Flynn movie The Sea Hawk.

In many of his earlier films, Silverheels' work is either uncredited or is credited as Harry Smith. Around 1945 he began using the name Silverheels Smith, adopting a nickname he earned because of his skill on the lacrosse field. By the time he appeared in The Prairie in 1947 he had begun using the name Jay Silverheels and many years later legally adopted the name.

In some of his roles he played nameless Indians. In others he played historic figures such as Geronimo and Tecumseh. But few and far between were the roles where he was able to break away from Hollywood's stereotypical view of what an Indian was.

An ironic bit of casting with an Indian actor playing a Mexican character after many years of Native roles going to Mexican, Italian or white actors.

In 1966, Silverheels, wanting to do something to help other Native actors break into the business, started up the Indian Actors' Workshop in Los Angeles, offering training and advice gleaned from his own personal experience.

Through the workshop, by serving as an example and, later in his career when his fame gave him some clout in the business, he fought for more and better roles for Native actors.

Silverheels suffered a series of strokes in 1975 that left him partially paralyzed. He died from a stroke in Woodland Hills, California on March 5, 1980, but his final resting place is back on the Six Nations reserve where his ashes were scattered on the family farm.

Silverheels' contributions to the acting world have been recognized many times over. He has a star on the Hollywood Walk of Fame. He is an inductee in the First Americans in the Arts Hall of Honor and in the Hall of Great Western Performers in the National Cowboy and Western Heritage Museum in Oklahoma.