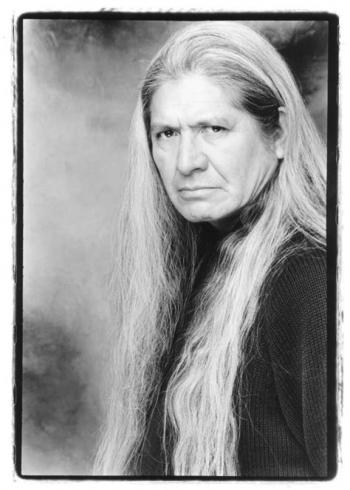 Had he lived, Gordon Tootoosis’ star could only rise higher, but the talented and elegant actor succumbed to pneumonia on July 5, 2011. He was 69.

Tootoosis was best known for his roles as the enigmatic One Stab in the movie “Legends of the Fall” and wicked Albert Golo in the television series “North of 60”.

Recalling images of him galloping across the Plains on a white horse as the famous Cree leader Big Bear in the mini-series “Big Bear”, or in his “Blackstone” television role as Cecil Delaronde, an exemplary Elder who advised a woman in her campaign to end political corruption on their reserve, admirers on social media sites said they enjoyed the breadth of his roles.

Members of Canada’s arts community, including Peter Herrndorf, president and CEO of Canada’s National Arts Centre, expressed condolences to Tootoosis’ family and friends, commenting on how much the actor’s career brought awareness to Aboriginal issues while contributing to the cultural life of Canada. The centre lowered its flags in recognition of his passing.

Roseanne Supernault, a young actor with a recurring role on Blackstone, said she had been sitting with her dad telling him how funny Gordon was when Windspeaker contacted her with the news of his passing.

“He had that incredibly unique Native sense of humor that not all can quite grasp. He was as wise as one could hope for, but more importantly he could make me laugh till I was almost in tears; it only takes mere moments for someone like him to have an affect on your life,” she said.

“I met him on “Blackstone” and thankfully shared the screen with him in “Doomsday Scrolls”. He left so soon, but it would be selfish to have kept him longer. He inspired me so much as an artist and human being and from him I remember the importance of our people’s way and culture.

“We all grew up watching him in film and TV and, in this world, imagery is so vital to how we view other people. So, with that he had the power to shed a beautiful light on Nehiyawak (Aboriginal people), and for that we must be eternally grateful and continue on in our own work on this path he has made easier to walk on,” Supernault shared.

Born on the Poundmaker Cree Nation in Saskatchewan on Oct. 25, 1941, Gordon was one of 13 children. His father was John Tootoosis, who passed away in 1989, an activist who co-founded the Assembly of First Nations (AFN) and founded the Federation of Saskatchewan Indian Nations (FSIN).

John was the grandson of Yellow Mud Blanket, brother of the great Plains Cree leader Poundmaker, who played a critical role in the Northwest Resistance of 1885.

Gordon was a residential school survivor, and used this experience to help youth and young offenders as a social worker. He also served as chief of his community.

His great love was horses, and he became a champion calf roper and team roper. He sang traditional Cree songs and was also a dancer, touring with the Plains Intertribal Dance Troupe in the 1960s and 1970s throughout Canada, Europe and South America.

Gordon married Irene Seseequasis in 1965. She had her Masters in Social Work,. The couple was married for 46 years and had three daughters and two adopted sons. When their youngest children moved out, they raised four grandchildren after their daughter Glynis died of cancer in October 1997.

“My grandchildren are the light of my life,” Gordon was quoted as saying in a 1999 interview in Saskatchewan’s Eagle Feather News.

Gordon’s first acting role was in “Alien Thunder” in 1972 with Donald Sutherland and Chief Dan George. George was Gordan’s mentor and adopted father. Gordon would later dedicate one of his acting awards to Dan George.

Gordon went on to star in more than 40 films over the next 35 years and was awarded the Order of Canada in 2004 for outstanding achievement and dedication to the community and service to the nation.

When asked what it was like to work with Donald Sutherland, Gordon didn’t mince words.

“It was very difficult. Him and Mickey Rooney I can do without,” he once said.

“Legends of the Fall” was his favorite movie to act in, and he described Brad Pitt and Anthony Hopkins as “classy guys who were great to work with. They were very down to earth. It also helped (to be) working with my dear friend Tantoo Cardinal.”

He admitted that his role as Big Bear was one of his toughest because he was playing such a well-known character and “didn’t feel worthy because I have a lot of respect for him, but once I got into it, it was okay.”

His own favorite movies were “Ben Hur” and “The Godfather”. He loved old black and white classics, and watched talk shows while reading scripts, which he received more and more of as he got older.

Gordon encouraged young, aspiring actors to “study the industry and the craft. Start with live theatre and work your way up. No one gets discovered these days.”

He and Tantoo Cardinal co-founded the Saskatchewan Native Theatre Company to work with youth and, as co-chair, Gordon was prepared to take a lead role in the organization’s restructuring before his death.

After being away from the stage for 15 years, Tootoosis took the lead in the play “Gordon Winter”, a fictionalized account of a controversial Aboriginal leader inspired by the late David Ahenakew, who lost credibility after uttering anti-semitic comments.

Ashley Callingbull, Gordon’s niece and second runner-up as Miss Universe Canada 2010 (and who would go on to win the Mrs. Universe competition in 2015), said she had talked about working with him since she was a little girl and was glad to play his granddaughter in the first season of “Blackstone”.

“My uncle Gordon was an extraordinary man,” she said.

“Very humble, loving and spiritual. He’s the type of person who can walk into your life and change it forever.

His words are so powerful and can create change. I am so honored to have worked with him and so happy I got a chance to know him and love him. He is like no one else.”