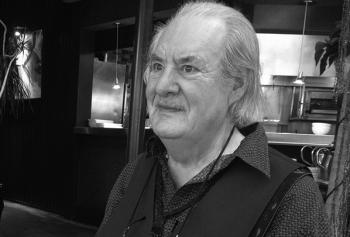 With his great sense of humour, Gene Rheaume twice won the Northwest Territories Liars Club title with his tall tales.
By Dianne Meili
Originally published in 2013

Métis statesman Eugene (Gene) Rheaume grew up on the edge of European and First Nation communities, unable to live in either. He spent a distinguished life trying to level the playing field for Aboriginal people.

When Rheaume’s father moved the family of nine children from Alberta to God’s Lake, Man., where gold was discovered, they were prohibited from living on the mining company’s site because his mother was Métis-Ojibwa.

Neither could they live on the Indian Reserve that bordered the mine because his father was French Canadian.

“So my Dad built a great big log house mid-way between… We lived halfway between the whites and the Indians,” Rheaume told biographer Fred Favel in a 1998 article.

Inheriting the ingenuity and bravado his father demonstrated when it came to problem-solving, Rheaume became a politician and later an advocate who promoted equitable treatment of First Nations, Inuit and Métis in Canada.

He made numerous contributions on behalf of the Congress of Aboriginal Peoples (formerly known as the Native Council of Canada) which he helped form in the 1970s.

When the God’s Lake Mine closed in 1944, the family moved to Flin Flon and Rheaume earned several high school scholarships that he put toward post-secondary studies.

After working for the province as a probation and parole officer, and medical rehabilitation specialist, he joined the department of Northern Affairs in 1958.

“I spent the summer on the Canadian boat, the C.D. Howe,” he told Favel. “It visited all the high Arctic settlements returning Inuit patients from southern hospitals, X-raying the ones in the settlements… and then taking out the ones with TB that required treatment.”

In those days, there were no treatment centres for tuberculosis in the Arctic.

Placed in charge of finding foster care for children left behind, Rheaume was appalled at how they were abandoned.

“The Canadian government ships would go in the North and X-ray people, and if they found them positive they just took them out and left families standing on the beach, sometimes just little kids.”

He was promoted to regional superintendent, but by 1962 he turned his sights toward politics. Family friend Gillian Zubko recalls how she helped Rheaume find his campaign slogan when he visited her father, Mike Zubko, in Aklavik, N.W.T.

“I must have been six when Gene heard me yelp “go, dog, go” from the Dr. Seuss book I was reading at the table. He loved it and used it for his campaign slogan: “go, Gene, go”.

“My Dad ran a charter flight service so he flew Gene around and when they got together, they never stopped joking around and laughing. We kids just loved him and it was an event when he visited.”

Rheaume ran unsuccessfully for a seat in the House of Commons in March 1962, but was elected to represent the opposition Progressive Conservatives in the Northwest Territories one year later when Lester Pearson was the Liberal Prime Minister.

At the age of 31, he went to Ottawa, the first Métis to be elected a member of Parliament since Louis Riel.

He served on nine Parliamentary committees, including fisheries, Indian Affairs, human rights and citizenship; as well as mines, forests and waters.

After being defeated in the 1965 federal election he chose to work as project coordinator for a study on Aboriginal citizens and the law.

A later comeback attempt at federal politics in 1974 would prove unsuccessful.

“He was the invisible hand behind the formation of so many groups, like the Native Council of Canada, who pushed for change. He knew the political ropes… He was good friends with Jean Chretien, the minister of Native Affairs, and he’d been chief of staff for Opposition Leader Robert Stanfield.

“He was a phenomenal wordsmith and speech writer. He was sought after by Aboriginal groups for his skills as a chairperson, and many successful people like Harry Daniels were mentored by him.”

As national chairman, Native Housing Task Force, Canada Mortgage and Housing Commission, he helped initiate programs resulting in the construction and repair of well over 25,000 homes.

With his great sense of humour, Rheaume twice won the Northwest Territories Liars Club title with his tall tales. He often quoted acts from Shakespeare plays and passages from The Bible, displaying a remarkable memory “until the day he died,” said son Ross.

Perhaps borrowing from his days growing up in the bush and on the waters of God’s Lake, and hoping to highlight the role Aboriginal people played in the formation of Canada, Rheaume successfully proposed the idea for Canada’s Centennial Voyageur Canoe Pageant, held during the country’s year-long centennial celebrations.

On May 24, 1967, 10 canoe teams representing eight provinces and two territories began a 5,283 km race from Alberta to Quebec. Paddling and portaging 104 days from Rocky Mountain House to Montreal, the athletes arrived on Sept. 4. The pageant holds the Guinness record, as of March 2012, for longest canoeing race in history.

“He spent a huge amount of time on that canoe race. That was his baby,” said Ross.

“His roots definitely went back to God’s Lake. He always said ‘anything is possible. If I can go from living in a log cabin with a mud floor, along with eight brothers, and end up in the House of Commons, this must be true.’

“He may have been away a lot as a father, but he had a huge impact on me. When I said I wanted to be an artist he brought me books about Leonardo Da Vinci and said ‘this is the guy to emulate.’ He didn’t do things for us kids, but he said if we worked hard and applied ourselves, we could do, and become, anything.”

Rheaume died from complications of cancer surgery on Nov. 1, 2013.