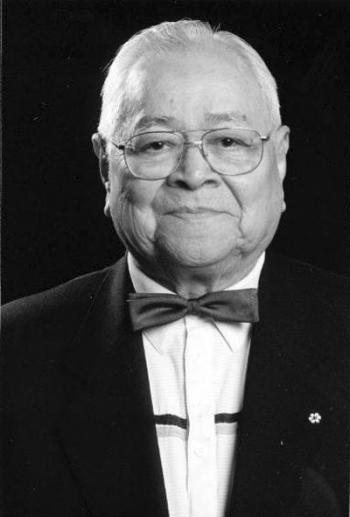 The Nisga’a Nation of northwestern British Columbia is mourning the loss of its chief of chiefs, Dr. Frank Calder, who passed away on Nov. 4, 2006 at the age of 91. Throughout his lifetime Calder was a pioneer in the cause of Aboriginal rights around the world.

According to a story told by the Nisga’a people, Calder was destined from childhood to do great things for his people. As a baby, the story goes, Calder was presented to a gathering of Elders who were discussing the issue of land claims. It was perceived to be an immovable mountain, an obstacle standing in the way of the nation ever progressing toward self-determination.

The story tells of how Chief Nagwa’un declared that this small child would learn the ways of the non-Aboriginal people and, in the course of his lifetime, he would move the mountain.

Throughout his long and distinguished career, Calder blazed many trails, but the 1973 Supreme Court of Canada decision that bears his name is likely the accomplishment for which he will be most remembered.

The landmark Calder decision established that Aboriginal title existed under Canadian law. The decision was particularly important for the Nisga’a and other Aboriginal groups in British Columbia, where a provincial policy had been in place for more than 100 years that stated Aboriginal title did not exist, so no treaties needed to be negotiated with Aboriginal people in compensation for lost land.

For decades, Aboriginal people in B.C. called for treaties to be established, and for decades those calls were summarily ignored by government. Then Frank Calder came along.

Under Calder’s leadership, the Nisga’a argued that they had a legal right to occupy and manage their traditional lands. Over a five-year period, the case would wind its way through the British Columbia Supreme Court and the court of appeal before Calder and the Nisga’a would taste victory, thanks to a Supreme Court of Canada ruling that Aboriginal title to traditional lands existed, regardless of any government policy to the contrary.

The impact of the Calder decision was felt around the world. In Canada, the decision led the federal government to establish a land claim process and paved the way for the eventual negotiation of a land claim settlement for the Nisga’a people, the first modern-day treaty signed in B.C.

Calder was born on Aug. 3, 1915 at Nass Harbour to parents Job and Emily Clark and was raised by Louisa Calder and Chief Na-qua-oon, whose English name was Arthur Calder.

Like so many others, Calder was sent to residential school. The visionary young man could see how his experience at the Anglican Church’s Coqueleetza school at Sardis could be turned into something positive. He went on to graduate from Chilliwack high school, becoming the first Aboriginal person to do so.

He attended the University of British Columbia and again enjoyed the distinction of being the first Aboriginal student to graduate. During his time at UBC, Calder earned a degree in theology and gained an awareness of the lack of recognition of ancestral Aboriginal rights.

In 1949, Calder got involved in politics, running as a Co-operative Commonweath Federation (CCF) candidate in the provincial riding of Atlin. He won the election and served as member of the Legislative Assembly for the riding for close to 30 years, first with the CCF, then with the New Democratic Party and finally with the Social Credit Party.

During his time in provincial politics he became the first Aboriginal person appointed as a minister of the Crown in 1972 and 1973. Throughout it all, he was looking for every opportunity to further the rights of his people.

When he delivered his first speech in the provincial legislature in 1950, he called for a motion to establish a B.C. Bill of Rights, setting the stage for an ongoing campaign to have Aboriginal rights recognized. In 1955, he helped found the Nisga’a Tribal Council and led the organization for more than 20 years.

In November 2003, a special gala was held to honor Calder on the 30th anniversary of the Calder decision. At the event, British Columbia’s Lt.-Gov. Iona Campagnolo, remarked that Calder was one of few people in the world who have changed history.

“Had there not been an Honourable Member for Atlin elected in 1949 in the person of ‘Little Chief’ Frank Calder, and for his presence in the legislature of British Columbia, we would all today, be the poorer,” she said.

“Without Frank Calder and the resulting Calder decision, the 1982 Constitution of Canada would not now include a vital commitment to Indian, Inuit and Métis peoples.”

The walls of the home Calder shared with his wife Tamaki and son Erick were lined with awards and honors. He was enshrined in Canada’s First Nations Hall of Fame in 1967, earned his doctorate of divinity in 1989 and received the National Aboriginal Achievement Award in the lifetime achievement category in 1996.

When the Nisga’a Tribal Council decided to commission the book Nisga’a: People of the Nass River in 1993, Calder was asked to write the introduction. In it, he shared the Nisga’a history of travelling and fishing, and how his people settled along all 380 kilometres of the Nass River and its tributaries.

He described the Nisga’a homeland, 24,000 square kilometres that straddles glacier-fed lakes from the Skeena Mountains to the intersection of the Alaska Panhandle and the B.C. coast.

Salmon and other fish have been a staple of his people, who built a vast trading empire that reached along the coast and far inland. While they still enjoy their traditional activities of fishing, hunting and trapping, Calder noted that today the Nisga'a people are also lawyers, politicians, priests, administrators, teachers, linguists, business people and loggers.

They have survived the devastation of smallpox, influenza and other indignities at the hands of Europeans, and they have survived a cultural genocide. He concluded the powerful and often emotional introduction by pleading with readers to look at the faces of the Nisga’a people.

Calder retired in his mid-80s but spent his remaining days actively involved in community affairs. He last addressed the Nisga’a people on May 3, 2006, at a special assembly. His friend and lawyer Ian Izard said Calder’s sense of humor and clarity of mind remained until he died, and he was wonderful inspiration to all.

Despite the years of struggles, Frank Calder always believed the Nisga’a would win in the end. It took until April 13, 2000 before the Nisga’a Treaty was finally proclaimed law and, after more than five decades, Calder's fight had ended and he could rest. The immovable mountain had been moved at long last.