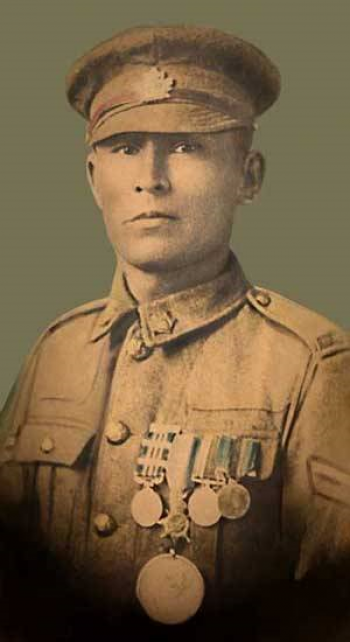 When Great Britain declared war on Germany on Aug. 4, 1914, Canada joined the Brits in the fray. By the time the war ended on Nov. 11, 1918, more than 600,000 Canadians had gone overseas to fight in what at the time was called The Great War, or The War To End All Wars. At least 4,000 of those fighting men were Aboriginal. One of them was Frances Pegahmagabow.

Pegahmagabow was born March 9, 1891 on the Parry Island reserve, now Wasauksing First Nation, near Parry Sound, Ont. When war was declared, Pagahmagabow, who at the time was working for the department of Marine and Fisheries as a marine fireman on the Great Lakes, wasted no time in making his decision to fight as a member of the Canadian Expeditionary Force.

They landed in France in February 1915 and soon Pegahmagabow and the rest of the division were in the thick of it, battling to drive the German forces out of France and Belgium.

Pegahmagabow’s first real taste of war came during the second battle of Ypres, which played out in Belgium in April and May of 1915.

The Canadians, who were being held in reserve during the initial stages of the battle, quickly moved to close the gap in the front line left when French and Algerian troops died or fled after the Germans released 168 tons of chlorine gas. It was the first time they’d used the chemical on the western front.

The Canadians fought through the gas, fashioning makeshift gas masks from handkerchiefs soaked in urine, and held their position, successfully keeping the Germans from breaking through.

Pegahmagabow, nicknamed Peggy by the other members of his battalion, was a skilled marksman, and soon after arriving on the European front his reputation as a sniper began to build. Although no official record of kills by snipers was kept, he has been called the most successful Allied sniper of the war, credited with killing dozens of German soldiers.

He also acted as a scout, a dangerous job that would take him out into no man’s land, the stretch of earth that lie between the German and Allied trenches. Sometimes these trips were undertaken in search of information about the German troupes, sometimes to attack the enemy in trench raids.

During the Battle of the Somme, a long and bloody battle that raged from July to November in 1916 as the Allied forces tried to break through German lines along the Somme River in northern France, Pegahmagabow was wounded, shot in the left leg. The injury could have meant a ticket home, but instead, he rejoined his unit as soon as he was able.

In the fall of 1917, Pegahmagabow and his comrades returned to Ypres, taking part in attempts to capture the village of Passchendaele. The battle for Passchendaele was begun by British Forces in July, but their efforts were hampered both by the fact that the German army was prepared for the attack, and by the heavy rains that fell, turning the land into a muddy swamp.

The Allied forces made small gains in the following months, but seemed no closer to their goal of capturing the village. The Canadian forces joined the battle in late October. In early November, the rain pouring down upon them, the muddy ground they walked on threatening to pull them under, the Canadian troops were able to take possession of the village. About 20,000 Canadian soldiers took part in the battle. The casualty count was 16,000.

Pegahmagabow’s role during the battle of Passchendaele was that of runner, racing back and forth across the battlefield, facing enemy fire, enduring the mud and an obstacle course of shell craters and corpses.

His job was to deliver messages from the front of the battle to the command in the rear, informing them about the location of the Canadian soldiers so artillery bombardments that were thrown at the German forces did not hit the friendly.

In recognition of his bravery in battle, Pegahmagabow earned the Military Medal and two bars. This was equivalent to earning the Military Medal three times. He was one of only 39 members of the Canadian Expeditionary Force to be so honored, making him Canada’s most highly decorated Aboriginal soldier.

The second bar, it is believed, he earned at Amiens in August 1918, a battle led by the Canadians that saw Allied troops drive the German forces back 19 kilometres in one of the most successful engagements of the war.

Pegahmagabow served overseas until April 1919, remaining after the Armistice was signed. He had fought throughout the entire war and survived, an amazing feat when you consider that one in 10 of the Canadian soldiers who went over to Europe to fight didn’t make it home.

With the war behind them, Canada’s soldiers returned home to reclaim their positions in Canadian society, and Pegahmagabow was no different. He married and started a family.

But despite his accomplishments on the battlefield, the war hadn’t changed much about the way Pegahmagabow was treated back home. When he’d fought for King and country he’d been treated as an equal, but once the war was over, he faced the same discrimination and limits to his rights he had before the war. But now he was determined to fight to change things.

He became a strong advocate for Native rights, working at the local and national level. In 1921 he became chief of the Parry Island band, just as his father and grandfather had done before him. He served as chief until 1925. He also served as band councillor from 1933 to 1936.

In 1943 he took part in a demonstration on Parliament Hill, part of a national delegation calling for Native people to be exempt from income tax and conscription. In 1945, Pegahmagabow became supreme chief of the Native Independent Government, one of the country’s early Aboriginal political organizations, serving in the role for two terms.

Pegahmagabow’s exploits during the war are recognized and celebrated in two sections of the Canadian War Museum in Ottawa, making him the only person to be featured in two locations in the museum’s exhibits.
He is one of about a dozen Canadian soldiers featured in the 1914 section of the exhibit dedicated to the South African War and the First World War.
He is also included in the Last Hundred Days section of the exhibit, chronicling the Allied forces’ final push to victory against German troops, a victory that cost 45,000 Canadian lives.