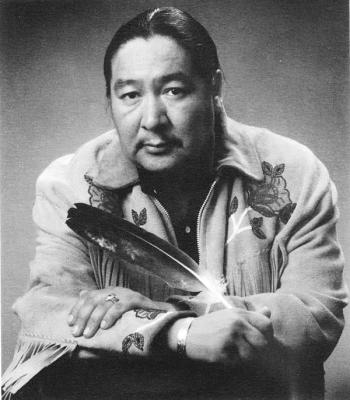 Posters of Elijah Harper holding an eagle feather pasted on walls around the world testify to his influence beyond Canadian borders.

Former Assembly of First Nations leader Phil Fontaine, in a tribute to Elijah, recalled seeing the image in a remote Mexican village during his travels. Jennifer Wood, 10-year executive assistant to the politician who scuttled the Meech Lake Constitutional Accord, said Elijah told her he encountered the poster himself during a trip to Korea.

“He gave people hope that they can stand up and speak, even if it goes against the grain of those in political power,” said Winnipeg youth activist Michael Champagne. He said he skipped work so he could hear Elijah speak at a conference on the legacy of the residential school system.

Darcy Wood, an Aboriginal leader from Manitoba, who had known Elijah since the 1980s, said Elijah was the kind of leader “who gave you his business card and jotted his personal number on the back.

“His contributions went beyond federal politics and Aboriginal issues. They went to a spiritual level and empowered people of various socio-economic backgrounds everywhere.”

The year was 1990 when the soft-spoken former chief of the Ojibwa-Cree Red Sucker Lake Indian Band in Manitoba prevented the accord from being ratified. It was a deal intended to win Quebec’s signature on Canada’s Constitution.

In consultation with other Aboriginal leaders, including Fontaine, he delayed the vote in Manitoba and made it impossible to pass the accord by its deadline, despite pressure by Prime Minister Brian Mulroney. Elijah held fast to his claim the accord ignored Aboriginal rights.

Later in 1990 he was voted The Canadian Press Newsmaker of the Year and also received the Stanley Knowles Humanitarian Award, the same award presented to Nelson Mandela of South Africa.

In 1992, he resigned from the New Democrats and a year later made a successful bid for the federal Liberal seat in the massive northern Manitoba riding of Churchill.

“He was always focused on northern communities,” recalled Darcy. “He maintained that isolated places should have the same quality of life as the rest of Canada.

“In the early ‘90s in the northeast section of Manitoba there were seven communities using diesel generators while high voltage lines above them supplied power to the south. He was instrumental in having electricity brought into those places.”

The CBC movie about Elijah Harper shows band members crowding into his tiny Red Sucker Lake reserve home to watch the CBC network on television. Though the range of the broadcast corporation was expanding, many remote communities were left out, so Elijah erected his own satellite dish in his yard.

“He was also instrumental in the Framework Agreement Initiatives,” Darcy explained, negotiations which saw Manitoba First Nations manage the delivery of education, fire and safety services, and some programs and services at the municipal level.

One of 13 children, Elijah was born on March 3, 1949, to Alan B. and Ethel Harper. He attended residential and public schools, and then studied at the University of Manitoba.

His progression from chief of Red Sucker Lake to becoming the first status Indian elected to the Manitoba legislature came in 1981. He oversaw the Rupertsland constituency for the next 11 years and in 1986 was appointed to cabinet as Minister Without Portfolio for Native Affairs, becoming Minister of Northern Affairs in 1987.

In 1993, Jennifer Wood watched helplessly as her boss battled an illness doctors and traditional healers were at a loss to rectify.

“He was in extreme pain – beyond words,” she said. “His right hip bothered him so much his blood pressure went up and he was vomiting. He was down to 127 lbs and suffering dehydration.”

Friends and relatives rallied around him and called for spiritual support. He attended a church service and, as the prayers escalated, “we heard a loud snap in the room,” Jennifer explained. “After that, he began to heal.”

Elijah moved to the international scene and visited Great Britain, the International Court of Justice at The Hague, the European Parliament in France, South Africa, South America (Brazil and Chile), and numerous places in the United States. In 1992, he attended the launch of the International Decade for Indigenous Peoples at the United Nations in New York, as well as the Declaration of International Indigenous Day in the same city in 1997.

In 1996, he went to the Moral Rearmament (an international peace organization) Jubilee Anniversary in Caux, Switzerland, and later attended meetings on reconciliation in both Australia and New Zealand. He was a strong advocate for both Indigenous and human rights.

As the son of a layman minister, and a traditionalist who withdrew to the land every autumn to recharge, Elijah brought religious leaders together with the conviction that they all served one Creator.

His 1995 Sacred Assembly for promoting Aboriginal justice through spiritual reconciliation and healing between non-Aboriginal and Aboriginal peoples resulted in the government declaring June 21 as National Aboriginal Day.

Elijah’s health issues continued to challenge him, but failed to stop him. As his kidneys deteriorated due to diabetes, he made arrangements for dialysis in hospitals located in the foreign countries he visited.

But finally, after years as an activist, promoting human and Aboriginal rights, and as a registered lobbyist and advisor to various organizations, he suffered a heart attack. He died in the early morning of May 17, 2013 at the age of 64.

His body lay in state on May 20 at the Manitoba Legislature as hundreds lined up to pay their respects, overwhelming daughter Holly Harper. She was quoted on a CBC website saying, “I am feeling the same support (as Elijah received after rejecting the Meech Lake accord) and it is giving me strength really.”

A funeral was held at Winnipeg’s Glory and Peace Church on Main Street before Elijah’s body was taken for official burial on May 23 in his home community of Red Sucker Lake.