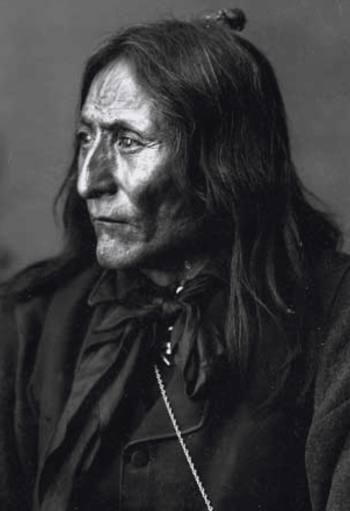 The year was 1830, and in a camp along the banks of the Belly River in what is now southern Alberta, a boy was born. His parents named him Astoxkomi-Shot Close. As he grew older, he was known by many other names, as was the way of his people.

In his youth he took the name Kyiah-st-ah, or Bear Ghost, and still later he took the name of his late father, Istowun-eh'pata, or Packs a Knife, who was killed when Shot Close was only a few years old during a raid on the Crows, bitter enemies of the Blackfoot Nation.

It was in his teens that Shot Close would demonstrate his bravery during a raid against the Crows, and earn the right to a new name-Isapo-muxika, Crow Indian's Big Foot. Interpreters translating the language of Blackfoot into English would shorten his name. They called him Crowfoot.

The boy, who would one day become a legendary leader of the Blackfoot people, wasn't even a member of the tribe until he was five years old. He was born into the Blood tribe, a neighboring group that spoke the same language as the Blackfoot.

The Siksika (Blackfoot), Kainai (Blood) and the Piikani (Peigan) made up the nation called the Blackfeet by white traders. The Blackfeet called themselves Ni-tsi-ta-pi-ksi-the Real People.

It was a few years after the death of Crowfoot's father that a group of strangers road into camp. They were warriors from the Blackfoot tribe returning from a successful raid on the Crows.

Crowfoot's grandfather, Scabby Bull, invited the men to stay and one, Akay-nehka-simi, or Many Names, stayed longer than his companions. He eventually married Crowfoot's mother, Axkyahp-say-pi, Attacked Toward Home.

When it was time for her to go and live among her new husband's people, Attacked Toward Home made a difficult decision. Crowfoot and his grandfather had grown close in the years since the child's father had died, and the two were inseparable. She decided to leave the boy with his grandfather.

What Attacked Toward Home hadn't counted on, however, was her young son's determination and his love for her and his young brother, Mexkim-aotani, Iron Shield. He followed after them on foot.

Hours after he set out, the young boy caught up with his mother, and Attacked Toward Home and Many Names were forced to turn around and return to Scabby Bull's camp, where all agreed the best solution would be to take both the boy and his grandfather with them to live among the Blackfoot people.

The bravery and determination shown by young Crowfoot were qualities that would shape his life. As a young man, he took part in several raids, showing himself not only to be a brave warrior, but also a skilled leader.

Crowfoot became a member of the Biters band. When Three Suns, the chief of the band, died, the members were divided as to who should be his successor.

Some favored the late chief's son, also called Three Suns, while others felt Crowfoot should become chief. In the end, the band split and Crowfoot and his followers formed the Big Pipes band, with Crowfoot becoming their chief.

While the old chiefs had friendly relations with the white traders, Three Suns and many of the other new chiefs hated them. Crowfoot, for his part, viewed them simply as people—some good, some bad—and dealt with them as such.

He was often a voice of reason when relations between the two groups became strained. His gifts as a speaker and his power of persuasion often swayed other leaders to see things his way.

Trading liquor for furs had not been allowed when the company ran the show, but American traders who came to Canada set no such standard. The problems that the liquor trade had caused in the United States swiftly spread to the "British" Indians.

With liquor flowing so freely, quarrels between Indians and whites increased, often with violent results.

Finally, the government was forced to step in. The North-West Mounted Police arrived in 1874 and Crowfoot and the other chiefs were willing to let them build forts on Blackfoot territory, with conditions. The NWMP promised that the police would put an end to the liquor trade and that justice would be meted out equally to both Indians and whites.

With the help of the Mounted Police, the liquor trade was ended, and gone was the violence it had caused. But with the police came new rules for the Blackfoot, and Crowfoot told his warriors they could no longer raid enemy camps for horses.

Other chiefs followed Crowfoot's lead, and soon the warring between tribes also came to an end.

This new peace marked the beginning of the end for the Blackfoot Confederacy, however. The once feared warriors were no longer considered a threat by the Cree and Métis in the north, who also enjoyed the protection of the Mounted Police.

These groups began moving into traditional Blackfoot territory, without fear of retaliation.

Crowfoot knew changes were coming. The settlers were becoming greater in number, the buffalo fewer, and the leader realized his people's very survival was at stake. So a treaty between the Queen and the Blackfoot Confederacy was negotiated.

Some Blackfoot chiefs were wary of signing such an agreement, but Crowfoot trusted the Mounted Police and the Queen's representatives, and in September 1877, after much deliberation, the Blackfoot, Blood, Peigan and Sarcee bands signed Treaty 7.

In 1885, Crowfoot was forced to make another difficult decision. Louis Riel had been successful in gaining the support of a number of Native groups, and a resistance against the Dominion government's European settlement of the West had begun.

Crowfoot was torn about whether or not to lead his people into the battle. His faith in the Mounted Police and the Dominion was wavering. The Indian agents appointed to the new reserve areas were at best indifferent, and at worst hostile.

Food rations had been cut, freedom of movement off reserve curtailed, and the once impartial Mounted Police were now often seen as siding against the Blackfoot.

But Crowfoot realized there was little chance Riel's rebellion would meet with success. And he knew, that by siding with the resistance, the Blackfoot would risk retaliation by the government, a government the Blackfoot people relied on for their food now that the buffalo were scarce in the territory.

Some of the younger warriors disagreed strongly with Crowfoot's decision, but when Riel's resistance failed, they came to believe his choice was a wise one.

After a long period of failing health, Crowfoot died on April 25, 1890. People across the country, both Native and non-Native, joined the Blackfoot people in mourning the loss of their great leader.