U of S researched receives achievement award in science and technology 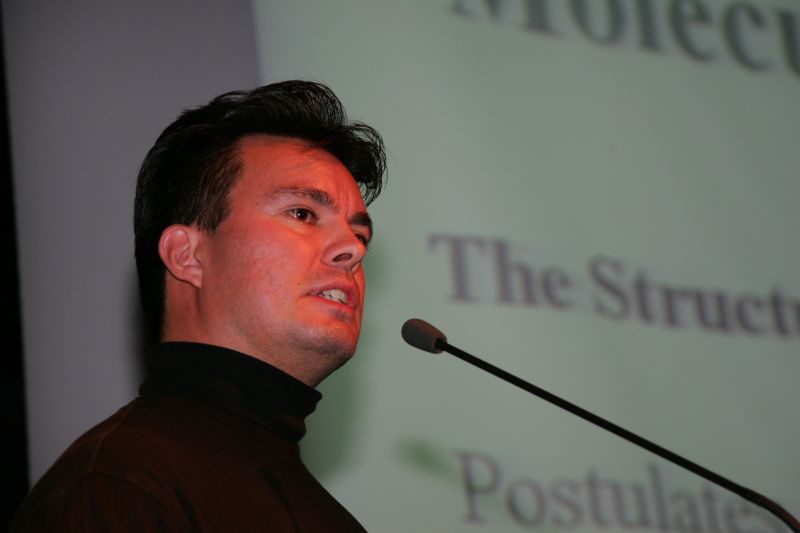 When the list of recipients of the 2004 National Aboriginal Achievement Awards was announced on Jan. 13, Dr. Lee Wilson became the latest in a long line of award winners with a Saskatchewan connection.

Wilson, who grew up in Lake Francis, Man., was a research associate in the department of chemistry at the University of Saskatchewan (U of S) when he became a recipient of the NAAF award in the science and technology category. He was also a science advisor to the dean's office in the university's College of Arts and Science.

Wilson earned his PhD in chemistry at the U of S, the first Métis student to do so at the university. Wilson said he felt quite surprised and honored when he found out he had been chosen to receive a National Aboriginal Achievement Award. Then, after thinking about it for a while, he also began feeling a bit intimidated, because of the stature of the people who had received the award in the past.

Wilson was recognized for the research work he was doing at the U of S, a continuation of the work he did while completing his thesis at the university from 1992 to 1998, molecular research that will result in the development of new methods of administering drugs to people.

“It's research that's based on a fairly simple concept,” he said. “What we're looking at here is looking at molecules that can be called container molecules. They're large molecules that have the ability to encapsulate other smaller molecules within itself ... so if you could envision this in three-dimensional space, what it would look like is a pail with the bottom cut out. And this so-called container molecule ends up having a lot of useful applications,” he said.

While receiving the National Aboriginal Achievement Award will likely put Wilson and his work more in the public eye than previously, Wilson hasn't really seen himself as a role model.

“I guess I don't look at myself that way necessarily,” he said. “I guess in terms of this award, you're referring to role models as just the pursuit of science and that it is in fact a possible achievement and it’s something that’s, I guess, within the grasp of various youth that are going through school right now. And I guess if I was to choose what kind of role model, I would probably like to do that, because I see there's a need for that.”

In terms of drawing attention to science career opportunities for Aboriginal youth, and helping to demystify the world of science, Wilson would be happy if he could play a role in that process.

“Let’s put it this way, I guess any kind of P.R. that science gets, provided that it’s positive, is good for promoting anyone to want to get into sciences. I do think that a lot of people—and this is right across the board—a lot of people have a Hollywood view or persona, if you will, of science. And even the people that are in science. Because I can tell you, I have literally made people fall over when I started talking about the fact that I am in science and I'm doing this and that, because they always think that it-s someone that’s older, middle-aged, kind of crazy looking like Albert Einstein or whatever," said the 34-year-old chemist.

“There’s a stereotype with that. And I suppose that there’s even a stereotype of what science really is. It’s more than just test tubes and microscopes. There’s a lot of really, really fascinating things that are going on," he said.

“Science is a very, very broad, interesting and a fascinating area. It covers everything from medicine to agriculture and all points in between. And I think a lot of people overlook that. They undervalue the importance of science.”

Wilson has also been working to eliminate those stereotypes by taking part in events in the community. He was one of the judges at the Treaty 6 science fair held on Big River First Nation, where he made quite an impression on the young participants.

“I felt that that was an important thing to go to, the Big River science fair, because a lot of the youth there, they did some really, really good work, and it was nice to be able to tell them that, and to question them and to talk to them, and just see their excitement”" he said.

“I think that's nice, to be able to step out of the university and be able to see how others are perceiving that world that I’m in all the time. Sometimes I lose sight of that, and its nice to get that perspective. But it’s also nice to show them that there are people there that will help them if they so chose.”

Wilson had some advice to young people to ensure that they too can make career choices based on all the options available to them.

“I would say that it would be in anyone’s favor who goes through high school to make sure that you take advantage of all the courses that are available to you. In other words, if you are thinking of possibly going to university, then make sure you take university entrance level classes. And the other thing is that, take all the possible classes that you can, I mean, within reason. So take all the maths that you can, take all of the sciences that you can, so that you know when it’s all said and done, what you’re interests are, whether its biology or physics or engineering or whatever the case may be. Because sometimes if you don't do that, then that really cuts down on your options later on…

“I think most people want a stable life somewhere down the road. And so that means getting a job. And so I guess if you want a job and you're going to spend a good part of your life working, you really should at least work at a job that you enjoy,” he said.

“Science is really big and it’s an exciting field. And let’s face it, the world is facing a lot of urgent and pressing problems, and the people going through school right now are going to be the ones that have to deal with it. So a good background in science—I mean, you can only have so many science type people—but if that’s of interest, there's probably opportunities there.”